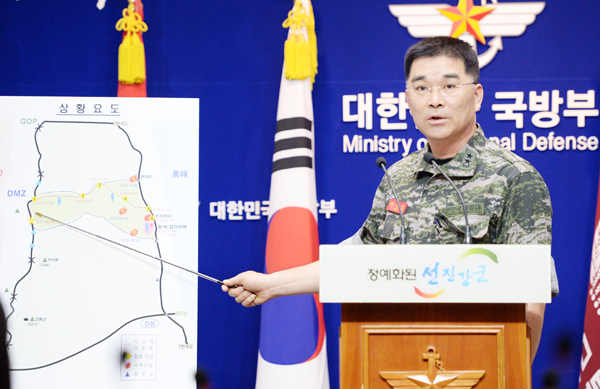 The Army’s Central Investigation Division tentatively concluded that the 22-year-old sergeant who killed five of his fellow soldiers and injured seven others in a shooting spree on June 21 at a General Outpost (GOP) in Goseong County, Gangwon, planned the crime in advance by himself.

“We have found out that Sergeant Lim decided to commit the crime after he found pictures that made fun of him on the back of a patrol logbook,” said Brigadier General Seon Jong-chul, head of the military police at the Army Headquarters, at a briefing held yesterday at the Ministry of Defense. “The pictures reminded Lim of his experiences being bullied in high school so he planned the shooting rampage intending to kill them all and kill himself as well.

“It turned out that Lim also planned to kill his friends in high school after he was bullied,” Seon added.

Lim was known to have dropped out of high school. He took a high school equivalency exam to go on to university.

The investigative team discovered that Lim had been bullied by six fellow soldiers but Lim is refusing to file a formal complaint. Seon said they will be punished within their unit.

“Killing someone is a serious [crime] regardless of whatever they did to me,” read the note. “But if anyone was in my shoes, living would have been a torture just like dying. I’m to blame, but ‘they’ are to blame as well.”

“There is a saying that recklessly throwing a rock can kill a frog,” the note continued. “They did not consider how their behavior, like teasing a dog or killing bugs without guilt, would be painful to others.”

“The word ‘they’ in the memo means everyone who has bullied him from his childhood years,” said Seon. “Lim said he wrote the memo with the intention of disclosing how much pain ‘they’ have given him.”

The Army also revealed details of the shooting rampage.

“Sergeant Lim took out a grenade and removed the pin behind a group of soldiers, rolled the grenade toward the group and hid himself in a safe place,” said Seon.

“When the grenade exploded, he loaded his K-2 rifle and fired more than 10 rounds at the wounded soldiers one-by-one.”

According to Seon, Lim thought other soldiers were trying to respond, so he went into barracks and killed one soldier and injured another. He then shot at another soldier standing outside.

Meanwhile, the military admitted that the forces that pursued Lim after the deadly rampage confronted him six times but could not apprehend him. Also, those who were injured in the pursuit turned out to have been wounded by friendly fire. Lim never engaged with the soldiers pursuing him.

The military dismissed Lim’s division commander, battalion commander and company commander from their duties to hold them responsible for the incident.