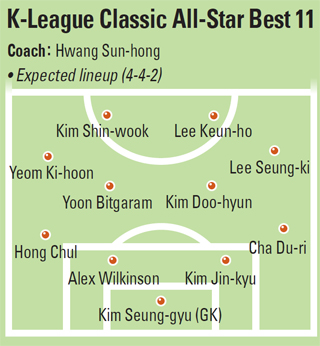 Eleven of the K-League Classic’s best players were chosen yesterday to form a team that will face Team Park Ji-sung in the 2014 All-Star Game on July 25.

The league announced the results of the voting to form the K-League All-Star Team, which showed that goalkeeper Kim Seung-gyu of the Ulsan Hyundai Tigers, who shined in the 2014 Brazil World Cup match against Belgium, became the most popular football player in the country.

The league decided to use this year’s All-Star Game to commemorate Park’s impressive 25-year career and provide a fun game for the fans at Seoul World Cup Stadium.

The members of Team Park Ji-sung have yet to be decided, as Guus Hiddink, who will coach the team, is choosing the players.

The league said the voting took place from July 1 to 13 on its website and the web portal site Naver. A total of 122,017 fans voted, as did the captain and coach of each club.

Under the 4-4-2 formation, the team’s two forward positions were taken by members of the World Cup squad: 196-centimeter (6-foot-6) Kim Shin-wook of the Hyundai Tigers and Lee Keun-ho of the Sangju Sangmu Phoenix, who scored a goal against Russia in Brazil.

The league said that this year’s All-Star Game will feature Korean and foreign stars. The roster for Team Park Ji-sung will be announced today.

Tickets for the event are currently being sold online at TicketLink (www.ticketlink.co.kr).