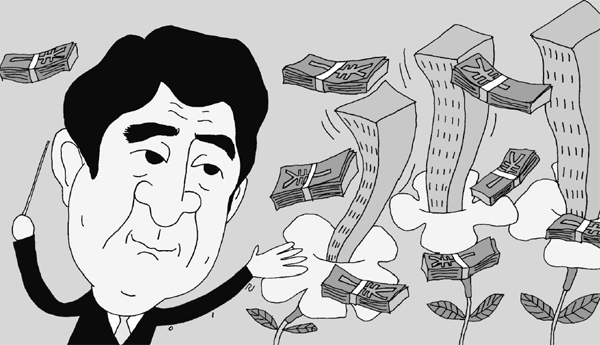 Japan may be on its way to finally shaking off its two-decade-old malaise of deflation and depression. Airports, streets and bars are packed and real estate and stock equity prices are soaring. Companies are running short of manpower due to increased work.

Much credit has gone to the so-called Abenomics - an all-out revival strategy driven by Prime Minister Shinzo Abe since he started office last year. The economic policies are a supermarket list of monetary, fiscal and structural reforms designed to reinflate the economy or jolt it out of a deflationary cycle.

The much-ballyhooed policy reflected Abe’s will to revive the country’s economy, which has been hardly moving for two decades and falling behind China. The plan applied every trick and beyond, even unlimited money-printing to encourage banks to lend and buy assets. The first two arrows - unlimited quantitative easing and hefty fiscal spending - have so far produced effects on data and the real economy as the yen fell and stocks rose dramatically, boosting consumption and exports. The third, structural reforms to make the labor market more flexible by drawing more Japanese women into the workforce and making the market more open through free trade agreements and deregulation, has also taken off.

The first two experiments in aggressive monetary and fiscal expansion have been implemented even at the risk of aggravating the already-enormous public debt. Abe’s dangerous prescription of resuscitating overdoses worked to reverse the yen’s direction for the first time in decades and spurred consumption, despite the hike in sales tax in April.

Concerns over inflation and another burst of assets linger. But the economy has reversed its deflationary course. The biggest success of the Abe shock therapy is that it has helped to stimulate the moribund sentiment of Japanese consumers and companies. The Asahi Shimbun commented that “Abenomics” was not about economics, but psychology.

Koreans may be watching the buoyant mood across the East Sea with envy as their economy hardly moves beyond a snail’s pace. Artificial and risky or not, the policy mix has helped to generate a much-awaited economic rebound in Japan and spurred business and consumer sentiment. Abe had eyes firmly on the economy before he started office.

President Park Geun-hye and her government did not know where to lay their finger on economic policy. They finally came up with a three-year plan to reboot the economy early this year. It was comprised of mostly structural reforms to change the fundamentals of the economy for sustainable growth.

The economic agenda, however, was stalled even before it was launched due to the Sewol ferry sinking in April. The entire first half was wasted without any work done. Deregulation and reforms have not even begun. Half-backed ideas on real estate stimuli only killed fledgling signs of recovery in the market. The ever-strengthening won weighs exports and domestic consumption has failed to pick up since the Sewol calamity. Aggressive macroeconomic actions styled after Abenomics are now out of the question. The radical shock prescription could do more harm than good to local economies that have not entered a deflationary cycle. Korean authorities also cannot bluntly intervene to stabilize the currency as Japan has done.

But what could be emulated is Tokyo’s third arrow. The structural formula aims to restructure the industrial, labor and market structures to engineer a new growth base.

Regulations were eased, including in the heavily protected labor and agricultural sectors. Most were pessimistic as all the past governments failed in going through with structural reforms. But the Abe government followed up with detailed changes in health care, farming and nuclear industry and actions to encourage private investment, improve labor structure and further open markets to raise competitiveness.

Abenomics is still ongoing and its success remains to be seen. Whether the reforms can be carried through in the initial design also is unclear.

There are possibilities that the excessive prescription could generate ill effects. Apart from individual policies, we cannot but envy that Japan has a leader with a will and drive to act out promised policies. He has gained confidence from his people and companies through his persistence.

A new economic leader is at helm. Deputy Prime Minister Choi Kyung-hwan must reactivate the economic agenda. He will be pressured to come up with fast results. The direction is clear-cut. He must try to stimulate the economy in the short term and lay the ground for new stable growth in the long run. Actions and policies should be carried out to achieve this goal while seeking cooperation from the opposition and the public.