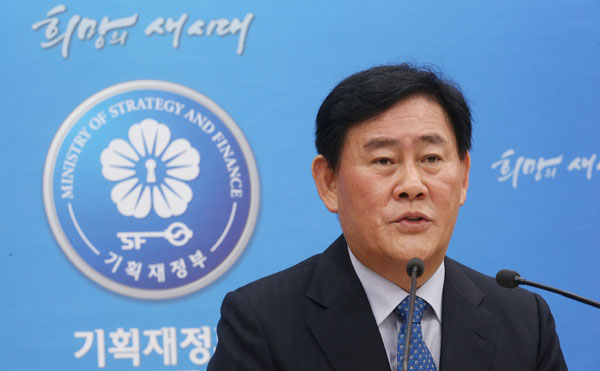 Choi Kyung-hwan, deputy prime minister for the economy and minister for strategy and finance, speaks at his first press conference after his inauguration at the Sejong government complex yesterday. [NEWSIS]

The new finance minister, Choi Kyung-hwan, said there will be no supplementary budget this year to stimulate the sagging economy.

But Choi said the government will try to use other fiscal measures to prop up the economy in the second half of the year and make the Park Geun-hye government’s three-year economic innovation plan successful.

At his first press conference as finance minister and deputy prime minister for the economy yesterday, Choi said he will consider adopting various expansionary measures to revive the economy but will not produce a supplementary budget this year.

“I said at my confirmation hearing that the current economic situation is so dire that there should be a supplementary budget,” Choi said at a press conference held after his inauguration in Sejong yesterday. “But we decided not to make an extra budget. Instead we will come up with a variety of other measures.”

“Rather than a supplementary budget, the ministry is considering increasing the government budget for next year,” Choi said.

The minister said he is planning to draw up next year’s budget as early as possible.

“It is up to the sentiment of economic players,” Choi said. “The ministry will employ expansionary policies boldly until consumer sentiment recovers.”

The “variety of fiscal measures” that will be used are estimated to be worth about 30 trillion won ($29.1 billion), according to unofficial government sources speaking on background.

According to sources at the Financial Services Commission, the Finance Ministry is expected to increase guarantees for loans provided by major public fund operators like the Korea Technology Finance Corporation and the Korea Credit Guarantee Fund.

The minister also said the government will lower its growth forecast for this year. According to ministry sources, the ministry is expected to cut the current 3.9 percent growth estimate to 3.6 percent.

Choi said conditions in the economy are much more serious than he realized.

“The national economy is heading toward a serious low-level equilibrium trap like Japan’s lost decades,” he said, “since sluggish domestic demand is leading to low growth, low inflation and excessive current account surpluses.”

Choi mentioned the Korean economy has lost steam especially since the Sewol ferry tragedy in April that discouraged consumers and companies to engage in active economic activities. Sluggish private consumption has become a serious problem.

In the first quarter of this year, the GDP expanded 3.9 percent year-on-year, thanks largely to continuing expansion of exports and a significant increase in construction investment. Private consumption, on the other hand, grew a mere 0.3 percent, halved from the fourth quarter of 2013.

In April and May, due to the impact of the Sewol ferry tragedy, the Korean economy faltered again as consumers stopped buying and retailers’ sales plunged.

Last week, the Bank of Korea downgraded its forecast for second-quarter GDP growth from a previous 1.1 percent to 0.7 percent compared to the first quarter.

The number of newly employed Koreans stood at 398,000 in June, the lowest since last July, according to data by Statistics Korea yesterday.

Choi said he wanted to start a virtuous cycle for the economy by helping to increase disposable incomes.

“Households’ incomes should be linked to opportunities for business investment,” he said. “Companies’ savings outstrip those of households, which is abnormal in a capitalist economy, where households are supposed to build up savings and businesses use the money to create added value as returns for consumers.”

Korean households are borrowing money to spend, while companies are piling up cash these days, Choi pointed out.
“By applying taxation or incentives, the government will try to make such corporate savings flow into households through increasing wages, investments and dividends,” the minister said. As for controversy over relaxing the loan-to-value (LTV) and debt-to-income (DTI) ratios, which are major constraints in the property market, Choi said the government will revise both through discussions with the financial and land authorities. According to ministry insiders, it is highly likely that the LTV will be fixed at a single rate of 70 percent, while the DTI will be set at 60 percent.

Meanwhile, BOK Governor Lee Ju-yeol made remarks that sounded at odds with Choi’s sentiments at a lecture in Seoul yesterday.

The governor also mentioned the dangers in cutting interest rates, despite pressures from the government to lower rates to stimulate the economy.