Is interest rate cut the key to boosting economy?

Is interest rate cut the key to boosting economy?

Bank of Korea Governor Lee Ju-yeol yesterday poured cold water on the market after it had recently started to expect that the central bank would lower the key interest rate to complement the new finance minister’s aggressive campaign to bolster economic recovery.ㅜ

The move has spun the market into confusion over the governor’s ambiguous policy direction, which contradicts a commitment he made at the beginning of his four-year tenure earlier this year to send clear signals.

At a forum held yesterday, Lee said a rate cut would do little to benefit the economy.

“The influence of a rate cut to boost potential growth would be limited,” Lee said. “It is difficult to be assertive and say that the rate cut would help stimulate spending. Although the burden in repaying loan principals will ease, it also means that disposable income will shrink.”

He added that lowering the interest rate to encourage spending means the nation would have to endure increased debts.

“In this situation we have to be look into the merits of increasing household debts. A further increase of debt from a rate cut [contrary to popular belief] could lower spending,” he said. 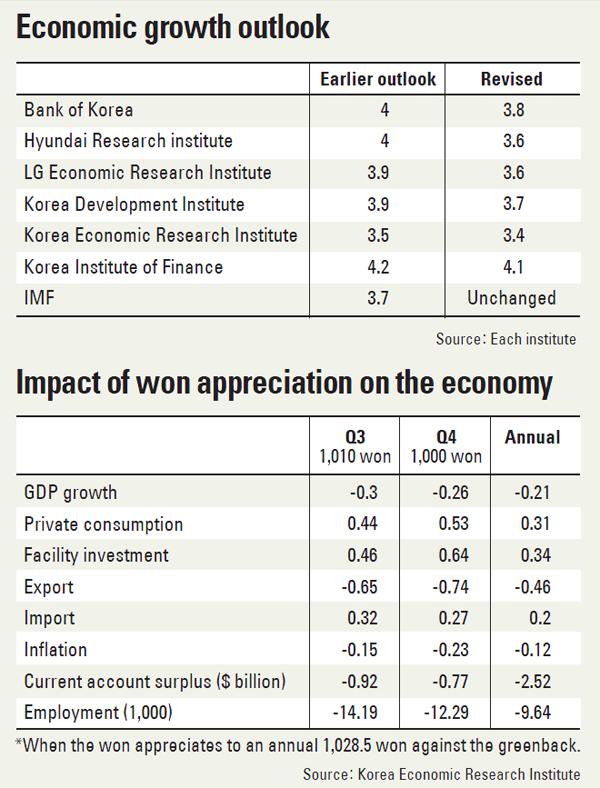 However, he noted that although household debt is at an all-time high, the possibility of it turning sour and leading to a financial crisis is low.

Lee said that there are alternatives to a rate cut. As a short-term solution, he made the bold proposal of easing regulations to encourage companies to increase their investments.

Long term, he suggested encouraging economic participation among young people and women by making the job market more open to them and also supporting the creative economy initiative.

“I don’t think there’s a shortage of liquidity in the market,” Lee said.

But he said that despite the steady supply, capital is being unevenly distributed among companies. While big and popular companies are benefiting from the money being pumped into the market, smaller companies are struggling to stay afloat.

Lee said the central bank is currently working on a measure to improve the flow of capital in the market.

Yesterday’s announcement shocked the market, which was expecting a rate cut due to the governor’s gloomy economic outlook after the bank’s monthly monetary policy committee meeting on Thursday.

Although the central bank froze the key interest rate for the 14th consecutive month at 2.5 percent, the governor said during the press briefing last week that the lack of consumer spending was severe. He attributed the sharp decline to the Sewol ferry disaster and said that the problem was more extensive than the central bank had first anticipated.

“The risks that the economy could head southward have grown,” Lee said on Thursday.

“In April, we considered risks from overseas much greater [than risks from the domestic market]. But since the Sewol incident [in mid-April], the impact has extended for much longer than we expected. Our views on the economy have changed from three months ago.”

As a result, the central bank lowered its economic growth outlook from 4 percent to 3.8 percent.

Lee’s comments on the dismal economy and the impact of the Sewol tragedy were interpreted as a signal to the market of a possible rate cut that could come as early as next month and, if not, then in September.

There were also speculations that the central bank would make a second rate cut near the end of the year.

“There is a strong possibility that the central bank could lower the key rate next month,” Lee Jug-bum, an analyst at Korea Investment and Securities, said on Friday, the day after the central BOK’s monetary meeting.

“However, as it is difficult to guarantee sufficient influence with a single rate cut, we can’t leave out the possibility of another rate cut in the fourth quarter.”

The analyst projected a 5 basis point cut within the year.

The fact that the committee’s rate cut decision was not unanimous for the first time in 14 months further supported speculation that a cut was imminent.

Such expectations have been growing fast over the past couple of months after rumors that Choi Kyung-hwan, floor leader of the Saenuri Party, would be nominated by the Blue House to succeed Finance Minister Hyun Oh-seok.

Choi, who also served in the Ministry of Trade, Industry and Energy during the Lee Myung-bak administration, is known for his focus on economic expansion. When he was nominated as finance minister last month, many guessed that he would push for a supplementary budget along with a rate cut to bolster the economy.

In a press conference yesterday, Choi stepped back from his earlier assertion that a supplementary budget was needed immediately and said instead that next year’s budget should be expanded.

But in times of crisis, a supplementary budget has proved effective in propping up the economy, and a rate cut has been effective in boosting it after.

In 2009 the Lee Myung-bak administration tried to save the economy from tanking by pushing for the nation’s biggest supplementary budget ever, at 28.4 trillion won. The central bank joined the effort by lowering the key interest rate to a record low of 2 percent and keeping it at that level until July 2010.

Following that precedent, the pressure on Governor Lee to encourage household spending by lowering the interest rate started to mount.

The bank’s situation feels like deja vu of early last year when then-BOK Governor Kim Choong-soo was being pushed by the new Park Geun-hye administration and Finance Minister Hyun to lower the interest rate as part of the government’s economic stimulus campaign.

To pull the economy out of quarter-to-quarter flat growth, the Finance Ministry was looking to a 17.3 trillion won supplementary budget and was nudging the central bank head to lower the interest rate to maximize the impact.

Governor Kim was reluctant at first and held the key interest rate at 2.75 percent in April, when many experts had expected him to lower the rate.

But Kim gave in the following month and lowered the key rate to 2.5 percent.

The only difference from last year is that although the economy was recording prolonged flat quarterly growth, there were expectations of a moderate, gradual recovery. Until April last year, Kim had stressed that the rate cut made in October 2012 from 3 percent to 2.75 percent was a pre-emptive move, so he didn’t need to make an additional cut.

Kim said that the Finance Ministry and Saenuri Party did not influence his monetary policy decision, but the bank lowered the rate to 2.5 percent last May just after the National Assembly passed the extra budget.

Now Lee is facing similar pressure, and it may be heavier due to the combination of contracted consumer spending and the won’s appreciation against the U.S. dollar.

Some say that a strong won could benefit the economy since a weak currency has only helped large exporters such as Samsung Electronics and Hyundai Motor, but most analysts disagree.

“It is true that the impact of the strengthening won on corporate profit and export competitiveness has been lessened compared with the past because companies have increased their overseas production. And the market dominance of Korean companies, thanks to the improved quality competitiveness, has increased,” said Lee Chang-seon, LG Economic Research Institute’s senior economist.

“However, the situation can’t be taken lightly,” he added.

He said the appreciation of the won would normally lead to increased spending in the domestic market, but the current burden of household debts and insecurity over life after retirement has undermined the usual benefits of a strong currency.

“With the appreciation of the won, most of the spending could be diverted overseas, such as increased buying of imported goods or overseas travel, while shrinking exports would further dampen the economic recovery and therefore negatively impact the domestic economic recovery,” Lee said.


Will a lower interest rate solve the problem?

Some experts have questioned whether lowering the interest rate will help the economy, particularly considering that the rate cut made in May last year, which was partly forced by the government, has failed to bolster the market as much as expected.

“No one expects an immediate improvement in the economy with a rate cut,” said an official at a local bank who requested anonymity. “However, it is a psychological effect. The rate cut could send signals to people to open their wallets and it could improve consumer sentiment.”

According to the BOK, since April, consumer sentiment has been retreating and remains below 100.

A ranking below 100 indicates most people are pessimistic about the economy.

Even if the government does go through with the rate cut, some analysts doubt that it would have an immediate impact on the economy.

“Monetary policy changes take around three quarters to make its full impact on the economy,” said Ronald Man, an analyst at HSBC. “This means that if the Bank of Korea cuts its policy rate in August, the boost to economic growth will only show in the second quarter of 2015. As such, it is unlikely to provide a material boost to growth in 2014.”

As Governor Lee mentioned, Man said that another rate cut may provide a further support to domestic demand but that could come at the cost of a higher leverage.

“We believe the [2.5 percent] policy rate is sufficiently accommodating and that the next central bank move should be a policy rate hike from an economics perspective. The prolonged low interest rate environment has fueled the household debt growth.

“Over the medium term, excessive household leverage may become a major obstacle to domestic demand growth if not addressed by policy makers today.”