Woods back in Open, but changes are numerous

Woods back in Open, but changes are numerous 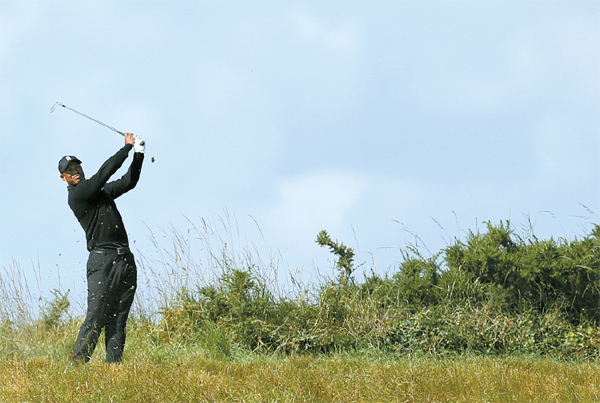 Tiger Woods plays off the 15th tee during a practice round ahead of the British Open golf championship at the Royal Liverpool golf club, in Hoylake, England, on Tuesday. The British Open starts Thursday. [AP/NEWSIS]

Tiger Woods was an hour into his practice round Tuesday at the British Open when he stood on the fifth tee with a foreign object in his hand.

Woods smashed it into the wind on the 528-yard hole and didn’t need to watch where it landed to realize it was in the middle of the fairway. Later in the round, he hit another driver off the tee. That’s twice as many than he hit over 72 holes when he won at Royal Liverpool eight years ago.

“This is a different golf course when what we played in ’06,” Woods said. “It was hot, ball was flying. It was very dusty. Now we’re making ball marks on the greens, which we weren’t doing then.’’

So much has changed in so many areas.

Royal Liverpool, green and thick this time around, is still a firm and bouncy test of links golf. But it’s nothing like it was in 2006, when the fairways were so baked and brown that Woods hit only one driver in four rounds. That was on the 16th hole of the first round, and the ball wound up in the 17th fairway. He still made birdie.

But it’s not just the golf course.

Woods is not the same player, having gone through three operations since - two on his left knee, the most recent surgery March 31 on his back. He used to win majors at a rate slightly better than one per year. Now he has gone six years without, dating to his 14th at Torrey Pines in the 2008 U.S. Open.

And the biggest change might be the guys who are trying to beat him.

Even though Woods is coming off a five-win season, he no longer is the strongest, biggest or longest player. Nineteen players have won majors since his last one.

“I think it gets harder every year just because the field gets deeper - more guys with a chance to win. What did we have, 16, 17 straight first-time winners?’’ Woods said, referring to one stretch when there were no repeat champions in 16 straight majors. “It’s getting harder to win. The margin is so much smaller. It’s only going to continue to be the case. Guys are going to get longer. They’re going to get faster. Guys who are coming out here are bigger, stronger, faster, more athletic.’’

Woods used to be among the longest. He is 38 now, and the latest reminder of how much golf has changed was on Sunday while playing with Gary Woodland, who gave up baseball and basketball to concentrate on golf. The ball makes a different sound coming off Woodland’s club, as it once did for Woods.

“I walked around with Gary Woodland on Sunday and he said, ‘Yeah, I finally found a driver and a ball I can hit 320 again in the air,’’’ Woods said, pausing to let those number sink in. “Yeah. In the air. So the game has changed a lot since then.’’

There is one change that most agree is for the better. At least Woods is playing.

The sport’s star attraction is playing a major championship for the first time this year. The back surgery to relieve an impinged nerve caused him to miss the Masters for the first time, and then the U.S. Open. He returned three weeks ago at Congressional and missed the cut, though Woods was more excited that he played pain free.

“Tiger Woods has been the face of our game for nearly 20 years,’’ Rory McIlroy said. “So to have him playing, have him back, is important. It’s a good a good opportunity for some of the other guys to stand up and be counted and win tournaments, either in his absence of if he’s coming back and isn’t quite back to 100 percent form.’’

That’s already been happening. In a most peculiar season, the PGA Tour already has produced 10 winners who were not among the top 100 in the world. And only four players in 35 tournaments have been in the top 10.

Woods acknowledged how different 2006 was in other ways. His father had just died two months earlier, and he had missed the cut in a major for the first time in the U.S. Open before going to Hoylake. He sobbed on the 18th green on the shoulder of his caddie, Steve Williams, whom he since fired, and tearfully embraced his wife, from whom he is now divorced. There have been game changes, life changes. Nothing is what it once seemed.

Woods finds inspiration not so much from his last victory at Hoylake, but the last major he won.

“I’ve proven I can do it,’’ Woods said. “It’s just a matter of giving myself the best chances this week to miss the ball in the correct spots, to be aggressive when I can and obviously to hole putts. That’s a recipe you find for every major championship. But I’ve just got to do it this week.’’