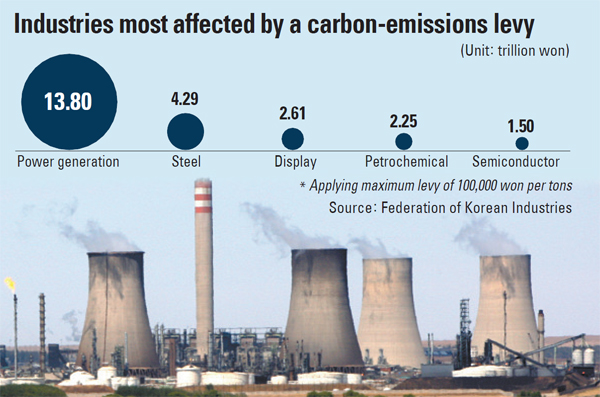 The Korean business world is aggressively disputing the government’s plan to start a carbon-emission trading system next year, as it could damage the manufacturing industry’s growth.

On Tuesday afternoon, more than 20 industrial groups, including the Federation of Korean Industries (FKI), the Korea Chamber of Commerce and Industry and the Korea International Trade Association, gathered at the FKI headquarters in Yeouido, western Seoul, to ask the government to postpone the carbon-emission trading system until 2020.

The carbon-emission trading system aims to reduce greenhouse gas emissions by setting a quantitative limit on CO2 emissions for companies and allowing them to trade insufficient or surplus amounts of CO2 emissions with each other.

After the FKI press briefing, industry representatives held a discussion with government officials, but they failed to find common ground as the government claimed that the system must go into effect because the law has been passed. 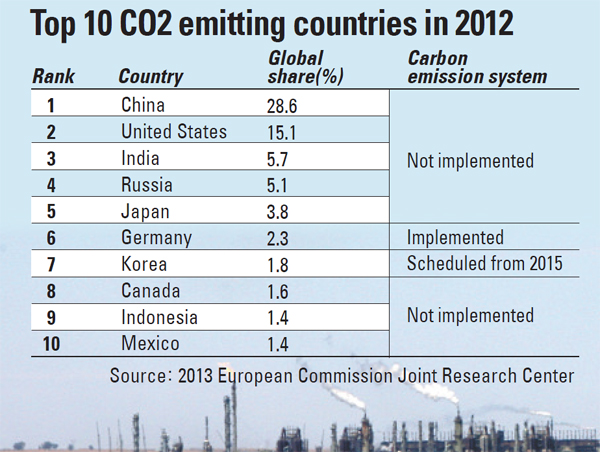 “The Ministry of Environment is saying that the system should go into effect because former President Lee Myung-bak promised to adopt it,” said FKI Secretary General Park Chan-ho. “If the carbon-emission trading system goes into effect, it will damage the competitiveness of Korean industries.”

In August 2008, Lee announced the national “Low Carbon Green Growth” vision during a speech to celebrate the 60th year of the country’s foundation. The law was enacted in 2012, and since 2008 the Presidential Committee on Green Growth has been launched and the Environment Ministry has come up with detailed guidelines.

Just last month, the ministry announced that CO2 levels allocated by industry would be reduced, and as the limits were revealed in detail, the business world started to vocally oppose the measure.

The FKI and other industry groups argued that the government is being too hasty by adopting the system because large carbon-emitting countries like China, which accounted for 28.6 percent of global carbon emissions in 2012, the United States and Japan haven’t implemented it yet. Korea accounted for only 1.8 percent of global carbon emissions in 2012, according to a recent report from the European Commission Joint Research Center.

“Carbon emissions are a problem the entire world needs to cooperate on,” said an official from the FKI. “Korea implementing a carbon system ahead of other countries is like operating a small air purifier right next to a plant that emits air pollutants.”

A recent report from Thomson Reuters Point Carbon also raised local companies’ eyebrows. According to the report, Korea is estimated to have CO2 emissions of more than one billion tons in 2020, which is 32 percent more than the Korean Environment Ministry predicted.

The report pointed out that the ministry’s estimate is the same figure that was reported to the United Nations Framework Convention on Climate Change in 2010, which doesn’t take the Energy Ministry’s national energy plan into consideration.

According to the FKI, fines for companies under the Environment Ministry’s first stage of the carbon-emission trading system, which can levy 100,000 won per ton if carbon emissions go beyond the limit, could be a maximum 27 trillion won ($26 billion), with the power generation industry paying more than 13 trillion won.

Other researchers supported the FKI’s claim yesterday at a seminar hosted by the Korea Economic Research Institute.

“Although it depends on the levy per ton, the annual revenue reduction rate from Korea’s manufacturing industry could be a minimum 0.75 percent [8.4 trillion won] to maximum 2.64 percent [29.6 trillion won],” said Lee Sun-hwa, a researcher at the Korea Institute of Local Finance.

Park Kwang-soo, a researcher at the Korea Energy Economics Institute, said that the carbon-emissions trading system could burden low-income families as it will increase energy costs.

“The carbon-emissions trading system will raise the cost of power generation, which could also hike electricity bills,” said Park. “For low-income households, in which electricity bills account for 45 percent of their total fuel costs, this could be a heavy burden.”

The Ministry of Environment said it is reviewing measures to help alleviate the pressure on companies to keep their carbon emission low.