Another minister pick bows out in disgrace

Another minister pick bows out in disgrace 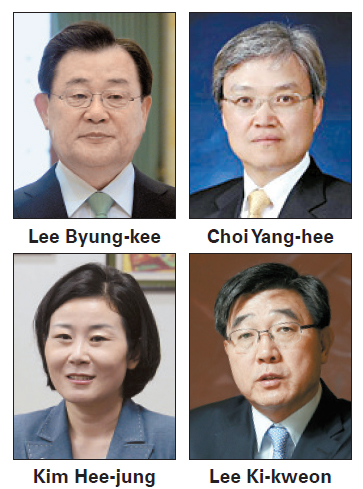 President Park Geun-hye’s culture minister nominee, Chung Sung-keun, abruptly walked away from the job yesterday after nonstop criticism by the opposition for a history of drunken driving and for lying during his confirmation hearing last week.

“There are things that I can’t explain in full and I think it’s my duty to step down,” explained Chung in a short statement yesterday morning after voluntarily withdrawing 33 days after he was nominated to be minister of culture, sports and tourism.

“As a candidate for public office, I disturbed the people and was not able to provide everyone with hope,” he added. “I seek forgiveness.”

Presidential spokesman Min Kyung-wook said yesterday in a briefing that Park appointed on Tuesday Choi Kyung-hwan as the new deputy prime minister for economic affairs, who doubles as minister of strategy and finance; Choi Yang-hee as minister of science, ICT and future planning; Kim Hee-jung as minister of gender equality and family; and Lee Ki-kweon as minister of employment and labor.

Park also appointed Chong Jong-sup yesterday as minister of home affairs, even though he had a rough confirmation hearing at the National Assembly and lawmakers failed to adopt legislative approval for the appointment.

Chong was hauled over the coals for engaging in real estate speculation, self-plagiarism, tax evasion and receiving special treatment to keep his teaching job while serving in the military.

Until Tuesday evening, the Blue House appeared adamant in following through with the appointment of culture nominee Chung, the 59-year-old president and CEO of the government-affiliated broadcaster Arirang TV.

In his confirmation hearing in the National Assembly on July 10, Chung came under fire for denying allegations that he engaged in real estate speculation and that a 1988 transaction was in violation of the law. After an opposition lawmaker presented evidence, Chung eventually admitted that he had lied and apologized. The hearing was called off afterward.

The main opposition New Politics Alliance for Democracy made clear that it had no intention to resume the hearing to question him further.

Chung suffered further embarrassment after it was revealed that he was drinking poktanju, Korean-style soju “bombs,” or boilermakers, after the adjournment of his hearing at a restaurant.

In a summit with the president and floor leaders of the ruling and opposition parties that day, Park Young-sun, the NPAD floor leader, requested that the nominations for Chung and Kim Myung-soo, the education minister nominee, be withdrawn.

Park emphasized that Chung’s perjury was enough to disqualify a nominee. “The people won’t forgive Chung for lying at his confirmation hearing,” she said.

Chung, a veteran anchor for broadcaster SBS, would have succeeded the culture, sports and tourism minister, Yoo Jin-ryong. He had worked on Park’s presidential election campaign as a public relations official.

The Saenuri Party appeared to welcome Chung stepping down, and multiple Saenuri officials indicated that the Blue House was concerned that the Chung controversy will affect the upcoming July 30 by-elections.

A Saenuri official up for re-election later this month told the JoongAng Ilbo yesterday, “I am thankful that nominee Chung quit. I was very worried ... If [President Park] went ahead with the appointment, all the by-election candidates would have fallen. It was a good decision [on Chung’s part].”

Park made a series of questionable appointments in recent months. Park withdrew her appointment of Kim Myung-soo on Tuesday to the dual post of education minister and deputy prime minister for social affairs. He came under fire for academic plagiarizing and illegal stock trading. High-profile Saenuri Party lawmaker Hwang Woo-yea is the new nominee.

Two prime minister nominees also stepped down after embarrassing revelations, which resulted in Park retaining current Prime Minister Chung Hong-won, although he had already tendered his resignation over the Sewol ferry disaster in April.

The president technically is able to push through cabinet nominations without the approval of the National Assembly and the confirmation hearings are a formality.

The exception is the prime minister position, which requires a parliamentary vote.

If the National Assembly does not approve of the confirmation hearing, the president can request parliamentary approval of the appointment within 10 days.

If the National Assembly doesn’t approve the appointment within that period, the president can still go ahead with it.

The main opposition party said that Chung’s decision came as a relief.

“It is the people who forced nominee Chung Sung-keun to step down,” said NPAD spokesman Yoo Ki-hong. “It’s belated but a relief.”

Yoo went on to request Park to appoint a new culture minister who will “meet the expectations of the public,” as she pledged following the criticism of corruption in the bureaucracy exposed by the Sewol ferry sinking.