No progress on Sewol ferry law

No progress on Sewol ferry law 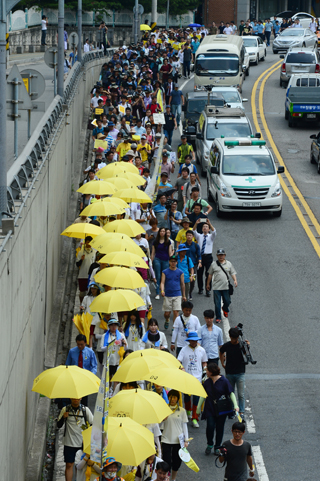 Students at Danwon High School in Ansan, Gyeonggi, who survived the sinking of the Sewol ferry on April 16, walk toward the National Assembly in Yeouido, western Seoul, yesterday with teachers and parents on a two-day march that started Tuesday from their school, after classes. The march was to demand that lawmakers pass the special law on the Sewol. Forty-six surviving students arrived at the National Assembly later in the day at around 3 p.m. [NEWS1]

The ruling Saenuri Party and opposition New Politics Alliance for Democracy failed to reach an agreement in last-minute talks yesterday to resolve the gridlock over the special law on the Sewol ferry sinking.

However, the two parties left open the possibility that they could meet again late yesterday night or today to attempt to iron out their differences. Today is the last day to pass the law in the ongoing parliamentary session.

“After I received a call from NPAD Chairman Kim Han-gill [proposing we hold a talk], I thought we needed to untangle the matter as soon as possible,” Kim told reporters at the National Assembly prior to the talks.

The two rival parties failed to narrow down their differences on the specifics of a special fact-finding committee that is to be created under a special Sewol law. If the two sides reach a breakthrough, they could move the bill forward in the general session today.

One of the most contested issues between the two is whether to empower the fact-finding committee with investigative authority and the power to indict suspects. The ruling Saenuri Party is opposed to the proposal, arguing that giving such rights to the committee would hurt the fundamentals of the judicial system. The Saenuri also claims that the committee, filled by panelists recommended by the victims’ families, would not be able to conduct an objective investigation.

The ruling party, instead, has argued that a special prosecutors’ investigation team be formed to investigate the accident and hold those responsible for the sinking accountable.

The opposition NPAD is demanding the committee be empowered with such authority, claiming it will ensure a thorough investigation independent of outside interference. The victims’ relatives support its demand.

Another contentious issue is who will be included on the special committee. The Saenuri wants committee members recommended by the president, the National Assembly speaker, the chief Supreme Court justice and the victims’ family members.

However, the NPAD demands the panelists be chosen by the ruling and opposition parties and the association of victims’ families, five for each group.

The ruling party is also opposed to both parties recommending committee members, saying such a move will inevitably politicize the committee’s activities. It was also worried that the opposition would take advantage of the impending investigation to target the Blue House for its inept response to the disaster in the early stages.

As the two parties remained in gridlock, it was the victims’ relatives and surviving Danwon High School students who went out on the streets calling for lawmakers to reach an agreement and pass the special law in a bipartisan manner.

The victims’ families met National Assembly Speaker Chung Ui-hwa on Tuesday and handed him 3.5 million signatures they had collected on the streets in Seoul, calling for the passage of the Special Law on the April 16 Sewol ferry disaster. Parents who lost their children inside the ferry still continue to collect signatures at various points in the capital, including Gwanghwamun Square.

On Tuesday, 46 surviving Danwon High School students marched from their school in Ansan, Gyeonggi at 5 p.m., arriving at the National Assembly around 3 p.m. yesterday.

They wore name tags attached to their school uniforms - the names of their classmates who never made it off the ship. The disaster left more than 300 people dead or missing.