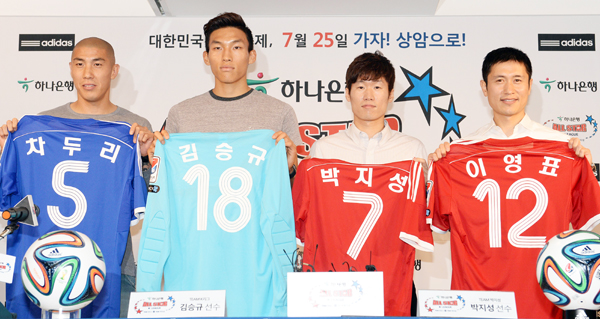 Retired football star Park Ji-sung said he will try to win the Most Valuable Player award in the 2014 K-League Classic All-Star Game, which will be staged on July 25.

The league yesterday announced the members of Team Park Ji-sung who will battle against the K-League All-Star team led by goalkeeper Kim Seung-gyu of the Ulsan Hyundai Tigers, who won the most votes by a landslide.

“I will try to win the MVP award as this is my second appearance in the K-League All-Star Game,” Park said. “I’m kind of nervous because I want to make some great plays in front of fans even though I haven’t played football for two months. This match means a lot to me because it will be the last match in my career.”

The league decided to use this year’s All-Star Game to commemorate Park’s impressive 25-year career and provide a fun game for fans at Seoul World Cup Stadium in Sangam-dong, western Seoul.

The members of Team Park Ji-sung are all players with whom he had a close relationship during his career. Selected along with Lee were Chong Tae-se (Suwon Samsung), retired Japanese football star Miyamoto Tsuneyasu and players who played in the 2002 World Cup with Park, including Lee Chun-soo (Incheon United), goalkeeper Kim Byung-ji and Hyun Young-min (Chunnam Dragons). A total of 15 players were announced, and the league said it will add five more later.

At the conference, Park thanked all the players and coaches who decided to play with him.

“I really want to thank Coach Hiddink and I hope we can make some great moments together,” he said. Hiddink and Park also teamed up in the 2012 K-League All-Star Game where they recreated Park’s celebration when he scored the winning goal against Portugal in the 2002 Cup. He ran from the goal area and threw himself into Hiddink’s arms.

“I’m currently speaking with Patrice Evra [former Manchester United teammate], but I think it will be a bit hard for him to come here as he is very busy,” Park said. “But I will try to convince him since I still have one more week.”

After Park shared his feelings about the All-Star Game, reporters changed the topic in the conference room, asking how Korea should reform its football system after struggling in the 2014 Brazil World Cup.

“People and media generally prefer watching foreign league football matches,” Park said. “But since the basis of Korean football is the K-League, more decent players should be fostered within it and more fans need to come and see the league matches.”

Lee Young-pyo, who was a commentator for KBS during the World Cup, lashed out at media outlets, many of which pay big money to purchase broadcasting rights for European leagues. “We all know what the problems are,” Lee said. “The question is whether we actually try to fix the problems or not. There are many media outlets here, but let me ask, how often do you broadcast K-League matches?”

Every weekend night, most cable networks broadcast European league matches, but they never air one K-League match. And they come out and criticize whenever Korea struggles in international matches, which isn’t fair. I heard that KBS will broadcast the All-Star Game, and I hope MBC and SBS broadcast more K-League matches.”

“The Pohang Steelers, led by many young players, are leading the league, but none of them were selected to the All-Star team,” he said. “It is because fans don’t know and are not interested in young prospects of the country. If fans love young players more, we can foster many decent players who can compete with European teams.”