The headquarters building of the Korea Electric Power Corporation is located in the middle of Samseong-dong in Gangnam District, southern Seoul, which is known as one of the most expensive areas in the city. Kepco said yesterday that it will announce launch of an open bid for the land next month. By Choi Seung-shik

The Korea Electric Power Corporation (Kepco) announced yesterday that it will sell the building housing its headquarters in Samseong-dong, Gangnam District, through an open bid to maximize the land’s market value and to dismiss suspicions that it is planning to sell it at a lower price for particular buyers.

The state-run power distributor said its board decided to start an open bid to sell the building, which is located on 79,342 square meters (19.6 acres) of land in one of the most expensive parts of southern Seoul. The public corporation decided to put the property on the market to comply with the government’s order to reduce its debt and tackle lax management.

The Kepco-owned property is worth about 2 trillion won ($1.9 billion) in net book value, and its market price stood at 1.48 trillion won in 2013. The real estate industry currently estimates that the land’s value is around 3 trillion won. Some estimate that it could be up to 6 trillion won, taking future value into consideration. 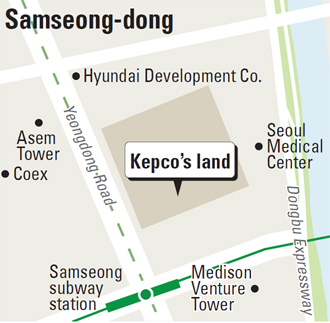 Kepco said an open bid will be the best way to ensure both the public’s interests and profitability.

According to a law on public institutions relocating to provincial “innovation cities,” the company plans to move its headquarters to Bitgaram Innovation City, the South Jeolla provincial area that includes Gwangju Metropolitan City and Naju City, by November. It aims to complete the sale a year after moving.

The government came up with the relocation law because it wants to send public institutions to 11 newly created innovation cities in order to balance regional development.

Kepco will open the bid in August. The previous deadline for the sale will move forward from November 2015 to the end of this year as the company is trying to reach its debt-reduction goals as early as possible while helping the government with policies aimed at reforming public institutions.

Both local and foreign business moguls have been showing a high interest in the land ever since Kepco’s relocation plans were made public.

There has also been a rumor that Samsung Chairman Lee Kun-hee’s eldest daughter, Lee Boo-jin, who is president of Hotel Shilla, is very attracted to the deal. Samsung has always wanted to purchase the property because of the name of the area, Samseong.

But contrary to expectations, Samsung didn’t make any official announcement yesterday about the land even after the Kepco board decision was made.

In contrast, Korea’s second-largest conglomerate, Hyundai Motor Group, released a statement yesterday saying that it wants to build a global business center (GBC) on the site. According to the world’s fifth-largest automaker, it will not only build company office buildings and showrooms, it also plans to turn the building into a Seoul landmark by adding a hotel, an automobile theme park, a convention center and shopping malls.

“The Autostadt in Wolfsburg, Germany, which is adjacent to the Volkswagen headquarters and museum, has become a top 10 tourist attraction in Germany that brings in 2.5 million visitors,” the group said in a release. “GBC is desperate for us because we want to leap one more step in the global market by enhancing brand value.”

Korea’s top automaker said it also wants to increase the efficiency of its operations by gathering its affiliates in one place. There are 30 Hyundai affiliates with 18,000 employees in Seoul, but only five companies with 5,000 employees are located in the group’s headquarters in Yangjae-dong.

“Even though our global headquarters are in Korea, because there was a lack of infrastructure to process accommodation, tourism, shopping and convention, some of the events organized by the group have been held overseas,” the group said.

“If the GBC is established, we can bring various events from overseas and add more economic value to the country.”