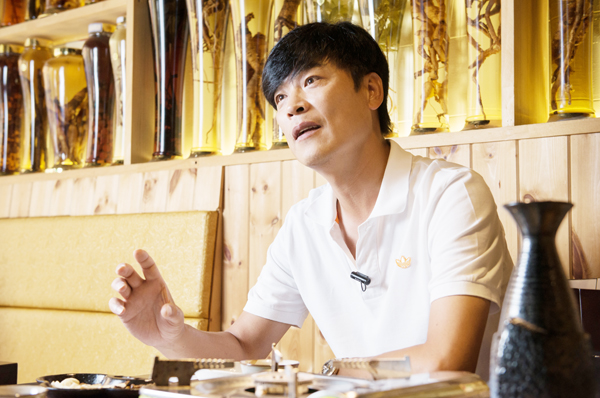 Director Ahn Byung-gi’s latest film “Bunshinsaba 2” is a Chinese hit that was released in Korea on Wednesday. By Kim Jin-sol (Studio 706)

Director Ahn Byung-gi has quite a resume in the world of horror. With works like “Nightmare” (2000), “Bunshinsaba” (2004) and “Apartment” (2006), Ahn has come to make a name for himself as a horror film specialist.

In 2011, he released a Chinese version of “Bunshinsaba” (known as “Pilsun” in China) and made more than 60 million yuan ($9.7 million), setting a new record for horror films there.

The sequel, starring local actress Park Han-byul, opened Wednesday in Korea and marks the first time for Ahn to release a film made for the Chinese market in his home country.

Ahead of the opening, Ahn sat down with the JoongAng Ilbo to talk about the two markets, what he hopes to do in the horror genre and why he believes in ghosts.

Heart-stopping scenes from “Bunshinsaba 2,” a Chinese take on the Korean film “Nightmare,” which were both directed by Ahn Byung-gi and star Korea’s own Park Han-byul. Provided by Joy N Content.

Q. ‘Bunshinsaba 2’ is a lot like your Korean film ‘Nightmare.’

A. It’s technically the Chinese version of “Nightmare.” The Chinese film market is quick in production as it’s growing. As soon as I did “Pilsun,” and it was a hit, they asked me to make a sequel right away. Of course I didn’t have a script ready, so I took my debut film and customized it for the Chinese market. As Chinese youth dream bigger and are more ambitious than ever, the film’s themes related with selfishness fit really well. “Pilsun 3” opened in cinemas in China not long ago and they’re already asking me to make the next installment, so I insisted I should release it in Korea first.

How did you get started in the Chinese market?

In 2011 a Chinese film company approached me and asked me to film a horror movie, I guess because my films have done well in Asia.

“Bunshinsaba” especially wasn’t that provocative, but the fact that it was to do with maternal instincts really hit a chord with Chinese viewers.

Just like in “Phone” and “Bunshinsaba,” maternal instincts are given much weight in your work.

A common thread in my horror films is that there is a woman at the center and maternal instincts lie at the base. There are also notions of grudges and I don’t kill off someone just for the sake of it.

What was it about “Pilsun” that gripped Chinese viewers?

“Pilsun” is “Bunshinsaba” in Chinese. The name means there are spirits hidden in writing pens. Most Chinese horror films dilly-dally around the plot and finish without a clear ending. Unlike this, “Pilsun” has a clear plot, and because a Korean crew was behind it, it was a lot more visually sophisticated than local works.

What is the “Pilsun” series about?

Because of the materialistic Chinese world view even horror films can’t contain ghosts. That’s why in Chinese horror films a psychiatrist appears at the end and informs the lead that they haven’t seen a ghost but have experienced a mental breakdown.

In “Pilsun 1” and “Pilsun 3” the protagonist has to spend a night in a haunted house with a child. The plot revolves around the bizarre things that unfold and, of course, is full of ghosts and hallucinations. But in the end, the lead decides that she saw hallucinations due to a past trauma. In “Pilsun 2” the lead gets locked up in a mental institution. The same things happen until the third film, but the problem is that there is now nowhere to take the story further.

Are you saying that due to Chinese censorship it’s hard to make a film there?

As a creator it’s hard to work with a barrier to freedom of expression. For example, when a person gets attacked by a knife, you can’t show what actually happens. This results in dampened responses among viewers. But if you look at the unique society China has, it’s understandable why they have censorship like that.

What was the reason for casting Park Han-byul?

Because we had a limited time-frame to make the movie, it was important to cast an actor who’d comply with my directions. Someone with experience in horror films and with good facial expressions was needed, and that was Park. For the Chinese dialogue we had a voice actor dub her part. But because the lips should make the same shapes, Park had to rehearse with a tutor everyday.

Is there a difference in the kind of horror that appeals to different nations?

I think the horror code is the same everywhere. But there are characteristics. Like in the U.S. and Europe, ideas should be fresh. Movies like “Cube,” “Saw” and “Paranormal Activity” exemplify this. But in Korea, where there is a fear of the [college] entrance examination and other societal issues, a horror film must touch on aspects of societal maladies for it to be considered good. Also, it’s hard for us to depict gore like in the “Saw” series. In the U.S. and Europe, there are many great horror writers, but in China and in Korea there aren’t too many who write horror scripts. Although it’s such a basic premise, it’s hard to find a breakthrough.

As the first Korean director to have made it in the Chinese market, what advice could you give to others following in your stead?

You can’t be prejudiced and think that the Chinese film market is behind in any way. It’s just different than ours. Even in Chungmuro they face a lack of material and story, but because of the cultural exchanges happening between China and Korea it might be possible to find a new way.

There is a difference between taking these things into consideration as you write the scenario for the Chinese market versus jumping in just because the market there is growing.

What do you think about horror being a minor genre in Korea?

Although you make films just for the sake of horror when critics jump in and talk about this and that, you can’t help but be swayed. Because of this, you get fixated with reversals and societal issues. The reason that “Apartment” was a failure was because of this. I cared too much about the message “why do we break our necks just to live in an apartment.”

Horror is not supposed to be a satire of society. When I was in China I watched most of Alfred Hitchcock’s films. The reason that “Psycho” is a classic is because it just plays on the human psyche. I’ve directed seven horror films and produced four, but I’m not content with one of them, and that is quite regretful.

When can we expect a film like the one you want to make?

I’m currently developing old ideas. For example, a woman who accidentally kills a guy she doesn’t like. To cover it up she tries to make it a perfect crime and buries the body but gets caught doing so by a serial killer. Neither the woman nor the killer can call the cops, but the woman tries to find a way to put the blame on the killer.

Why are you so obsessed with horror films?

It fits in perfectly with my personality and taste. From a young age I liked rainy days and thunder. I feel my concentration improve and I am soothed by these surroundings. Even now on stormy days I go for a drive, pull up to a place that overlooks the Han River and listen to music as I doze off. In all my films there is a rainy scene. I tell the sound engineer to make a remix of lightning and the sound of rain.

How do you stay on top of developments in horror?

I watch a lot of films and read a lot of newspaper articles. A few days ago I read that the Vatican recognized priests who perform exorcism. I’m interested in things like that. I want to make a film one day that deals with Satanism and exorcism, too.

Have you ever seen a ghost?

Many times. When you only get two to three hours of sleep [while on a shoot] you see a lot of strange things, and they all come in the form of ghosts. In 2001, when I was in the morgue of Hallym University Medical Center for a drama, that night when I went to sleep at an inn, I woke to a vision of a bald man in a checkered shirt and shorts with sweat all over his body.

I hate sleeping in motels and hotels. You never know what happened in that room. I also only move into new houses. In China, where I had to stay at a hotel, I made sure than my assistant director slept in the same room. All of the scenes in my movies come from real-life experiences.

What terrifies you the most?

Whenever I think about death I’m terrified. I make horror films because I want to conquer my fear of death. I think I started to detest death because I saw my grandfather and father pass away. To forget, I started working frantically. Also, being on stage is terrifying, too. One time I ran away from a press conference.

The Hollywood remake of “Phone” is taking longer than expected.

The investors haven’t been secured so the producers are having a hard time. It’s been eight years since they started talking about a Hollywood remake, I wonder if it will ever be made. Regardless, “Phone” has a special place in my heart.

Surely “Phone” is a work you could make a sequel from.

In 2012 I ran into Ha Ji-won and asked her to make “Phone 2” in commemoration of the film’s 10th year. Of my films “Phone” is the only one I want to make a sequel of. Cell phones are evolving and I think a lot of stories can be told in that vein. If I make a sequel I think Ha will take part.

Social media is no doubt a worthy film subject.

The way that social media spreads information around is scary. It becomes a sort of judging panel for those with a lot of knowledge on a certain area and then the individual becomes less decisive and sharp. Alienation because of social media is a substantial issue, too. People are changing because of it.

Do you want to try a different genre for a change?

I have intentions of tackling a warm and fuzzy film, too. I produced “Speed Scandal” (2008) and I’ve decided to produce the Chinese remake. And there is a second film, I’m not sure whether I’ll direct or produce, but it’s like “Sunny.” The plot revolves around disabled people forming an orchestra; it’s kind of like the musical version of “Malaton” (2005).