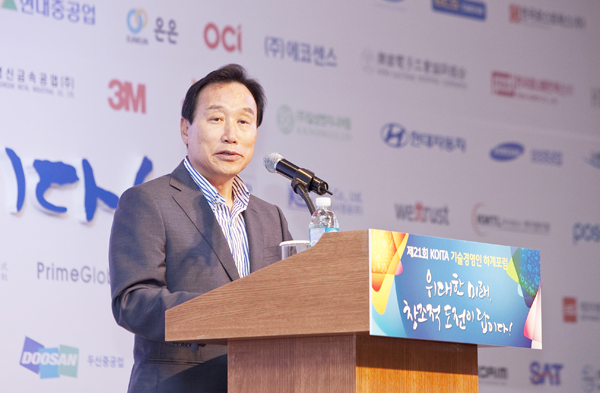 Kim Gwang-du speaks at the Technology Leaders Summer Forum held on Wednesday by the Korea Industrial Technology Association. Provided by the association

At the annual Technology Leaders Summer Forum held by the Korea Industrial Technology Association (Koita) on Jeju Island on Wednesday, the 67-year-old professor at Sogang University and director of the Institute for the Future of State (IFS) said the small number of technology experts in the financial industry is an obstacle to the government’s creative economy initiative.

“The government has created a 6 trillion won [$5.83 billion] fund for start-ups, but only 1.2 trillion won has been actually provided for the market,” Kim said in a lecture at the forum.

This year’s event, hosted by Koita Chairman Park Yong-Hyun, focused on the theme of “creative challenges” and was attended by about 500 people from major industries, academic circles and research labs.

“There is a lack of a professional work force in finance that can determine the value of new ideas. Therefore, companies investing in start-ups don’t take action,” Kim said.

He attributed the problem to long-held regulations in the nation’s financial industry. Financial institutions can’t systematically train professionals to evaluate the potential of new technology due to the constraints.

Kim said it is not surprising to see the tech start-up market losing its vigor even though it has funding, adding that the hurdles to a creative economy were the same regulations that limit most industries in Korea.

“We cannot expect creativity from our bureaucracy, which abolishes regulations on the surface yet creates more on the other side,” said Kim. “While electronics and machine industries in other countries are converging with each other, we are still managing them separately. As a result, our smart cars lost their competitive edge.”

For instance, the international standard for radio frequency in smart cars is about 5.9 GHz. But Kim explained that because of domestic regulations, Korean companies must develop separate products for domestic consumers and international consumers.

Hyundai Motor and Kia Motors need to use radio communications to successfully launch smart cars, but in reality, laws have made it difficult for them to become licensed radio communications businesses. Compounding the problem, control over domestic roads is divided among the Korea Highway Corporation and provincial administrations.

The professor also pointed out that merging information technology with biotechnology and nanotechnology could lead to diverse telemedicine services. However, regulations in medical law are hindering growth in the nation’s medical industry.

To reform the regulatory system, Kim proposed for the nation to enhance its economic flexibility by making regulations easier to change.

For example, in the financial sector, he said the government should seek regulations on transparency rather than regulating the operation of institutions.

In other words, the financial industry should shift away from the so-called positive system that states “must-do’s only” to the negative system, referring to one that allows “anything but this.”

The president must exercise strong leadership to break those ties, he underscored.

Getting rid of the “bureaucratic mafia,” known as “gwanfia,” is the first step toward making the creative economy successful, he suggested.

Kim added that Korean corporate culture, which is based on blind submission to superiors, is another obstacle to the creative economy.

He went so far as to introduce the idea that “survival of the fittest” has now turned into “survival of the submissive,” meaning it is extremely difficult for creative ideas to take root and gain recognition.