Shinsegae plans reforms for With Me shops

Shinsegae plans reforms for With Me shops 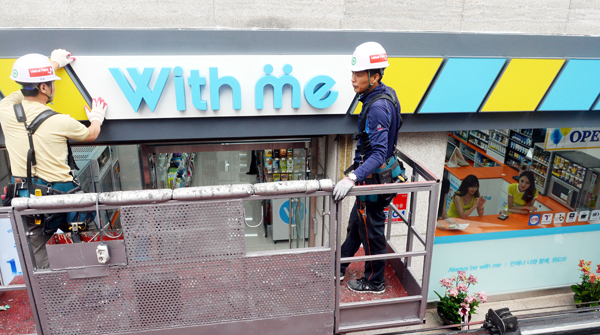 The banner of With Me convenience store in Banpo-dong, southern Seoul, is changed to feature a new design. [NEWSIS]

Local retail giant Shinsegae Group, which acquired the convenience store chain With Me last year, said yesterday it will begin revamping the business with new operating methods, differentiating it from the usual corner store business model.

The group said at a press conference at the Westin Chosun Hotel in central Seoul yesterday that unlike corner store chains that make profits based on the revenues of each individual shop, it will focus on supplying goods to With Me stores on a monthly basis.

Shinsegae also said it will eliminate penalties on estimated future revenues that store owners pay to headquarters if they want to close their shop and will ensure autonomous business rights for the owners.

“Instead of the excessive royalty system in accordance with revenues, we introduced monthly fees,” said Cho Doo-ill, CEO of With Me FS and the head of Shinsegae Group’s business management strategy division. 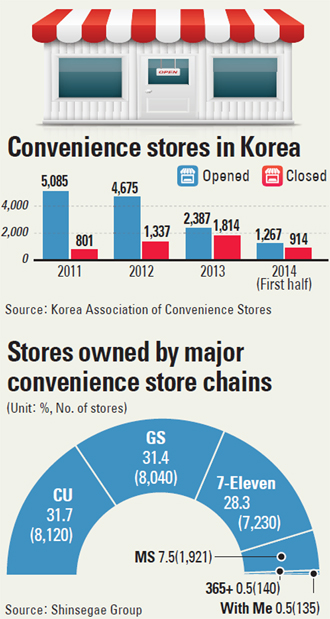 With Me store owners must now pay a monthly fee of between 600,000 won and 1.5 million won ($583 to $1,458) per month depending on whether the equipment and interior was paid for by headquarters.

“We have also eliminated the penalties for expected future revenues that franchisees had to pay the headquarters whenever they wanted to close a store,” Shinsegae said.

Currently, major convenience store chains such as CU, GS25 and 7-Eleven charge cancellation fees for breach of contract and royalties that the store was supposed to pay through the end of its contract.

With Me also chose to deviate from the practice of major convenience store chains requiring franchisees to operate for 24 hours a day, 365 days a year.

“The franchisees will also be able to assign their operating hours and holidays autonomously,” Cho said. “This can help maximize their profits, as the stores can customize their operations according to their own profit structures to save on operating costs.”

A With Me store owner in Banpo-dong, Gangnam District, said her profits had doubled since she switched from another major convenience store franchise to With Me a few years ago.

“I found it very difficult to operate the store for 24 hours because in our commercial district, there are not many customers at night,” said owner Kang Hye-sook, who has been running a convenience store for 10 years.

“Instead, I open the store early in the morning, which improved my profits and also made it easy for me to find a part-time worker.”

As a follower in the industry, the 130 With Me stores in the country are fewer in number than its competitors, which have about 8,000 stores each.

While With Me has 0.5 percent of the market, CU accounts for 32 percent, GS25 accounts for 31 percent and 7-Eleven controls 29 percent.

With Me will also face difficulties due to an oversaturated market, but Shinsegae said it will expand the number of With Me stores to 1,000 this year.

“Despite economic downturn, sales at convenience stores have been posting double-digit growth each year, and we decided that the convenience store is a competitive business to go for in the domestic market.”