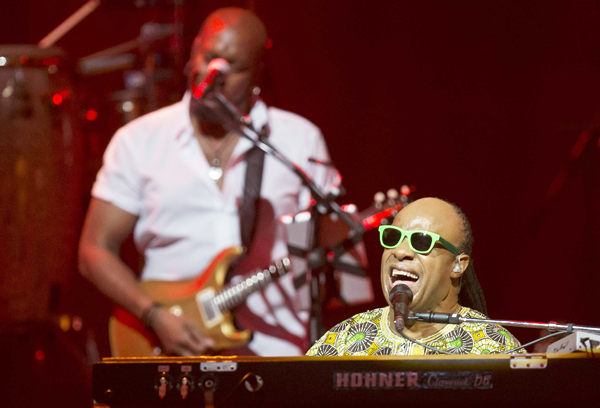 U.S. musician Stevie Wonder performs on the Stravinski Hall stage at the 48th Montreux Jazz Festival in Switzerland on Wednesday.[REUTERS/NEWS1]

MONTREUX, Switzerland - Motown legend Stevie Wonder gave a soulful two-hour concert at the Montreux Jazz Festival on Wednesday night, blending his hits with covers of the Beatles and Michael Jackson for an audience that included producer Quincy Jones.

The African-American singer and songwriter, wearing lime green sunglasses and braids down to his waist, headlined the 48th edition of the prestigious Swiss festival, fulfilling a longtime wish of its late founder Claude “Funky” Nobs.

“Tonight’s show is dedicated to a man who talked with me so long about doing this event. He is watching us from up in heaven - Mr. Nobs,” Wonder told the sold-out crowd of some 4,000 fans.

Addressing Jones, a former co-director of Montreux who was seated in the front row, Wonder said: “Not only a brother but a friend, I’m so grateful I’ve known him since I was 14 years old. He brought out Michael Jackson and so many young artists.”

Wonder, a 22-time Grammy winner who has been blind from birth, displayed his versatility, playing piano, harmonica and percussion. He was backed by 10 musicians and four vocalists.

He alternated hit singles including “How Sweet It Is (To Be Loved by You),” “You Are the Sunshine of My Life,” “I Just Called To Say I Love You” with the Beatles hit “Day Tripper,” Paul McCartney’s “Ebony and Ivory” and Michael Jackson’s “Billie Jean” from the best-selling “Thriller” album produced by Jones.

During “Living for the City,” about a poor Mississippi boy encountering racism and New York drug pushers, he said: “How I wish I didn’t have to write a song like this. But I had to write it, because it’s true. There is prejudice in the world.”

“It’s been a wonderful night. I was a bit late coming because I wasn’t feeling good at all. But we had such a good time,” he said, apologizing for arriving more than an hour late.

“Maybe we’ll come back next year,” he added.

Some fans who spent 185 Swiss francs ($210) to stand were unable to even enter the packed Auditorium Stravinski, where several women collapsed from the heat and crowded conditions.

Vanessa Huguenin, taking a break from the overflowing hall, said: “He’s great, impressive and sounds so good live. I brought my 7-year-old son to a historic concert.”

Among those attending was M.anifest, a rapper from Ghana who will perform on the Montreux stage on Thursday with Britain’s Damon Albarn of Blur and Gorillaz fame.

“I’ve seen a legend, now I can die in peace. He was on my list and my wish has been realized,” Swiss fan Valerie Helfer told Reuters.

“There aren’t any virtuosos like him these days. He played Latin music, African music, blues, jazz and rock.”

Nathalie Pichard agreed: “It was great. He is such a complete artist, his voice, instruments - no lip-sync. We waited three hours to be up front, but it was worth it.”