North walks out of talks on Incheon

North walks out of talks on Incheon 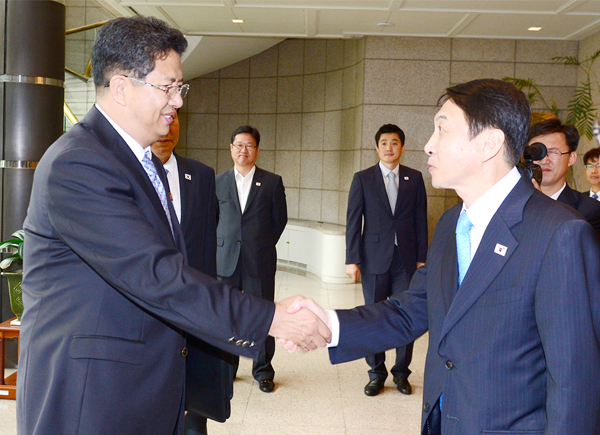 North and South Korea failed to reach an agreement yesterday in their first round of talks on the specifics of Pyongyang’s participation in the Asian Games in Incheon in September, the first talks in six years that focused on cooperation in sporting events.

The two sides failed to come to agreement and did not set a date for a follow-up discussion.

North Korea walked out of the third session yesterday, blaming South Korea for being insincere.

“North Korea was not happy with the way the talks were conducted,” said an official from the Unification Ministry.

They also discussed how the North Koreans would travel to Incheon. Options are coming by plane or boat, and coming directly or traveling through a third country, probably China.

North Korea proposed sending the athletes by direct flight and the cheerleaders over land in vehicles.

Another issue discussed was the amount of South Korean financial aid to be offered to North Korea’s cheerleading squad for the two-week event in Incheon.

If Seoul allows the North to send the athletes and cheerleaders via boat to Incheon, it will be the first time since 2010 that a North Korean boat sailed through the South’s waters and docked at a South Korean port. The May 24, 2010, sanctions by Seoul in the aftermath of the North’s torpedoing of South Korea’s Cheonan warship have forbidden such inter-Korean contact for the past four years.

For three international sporting events in the early to mid-2000s, the Kim Dae-jung and Roh Moo-hyun administrations covered all expenses incurred by cheerleading teams sent from Pyongyang. For the 2002 Busan Asian Games, for instance, Seoul forked over 1.35 billion won ($1.3 million) in aid.

The Ministry of Unification hinted yesterday morning that Seoul will not cover all the expenses this time and instead pay only a portion according to international standards for developing countries participating in global sports events.