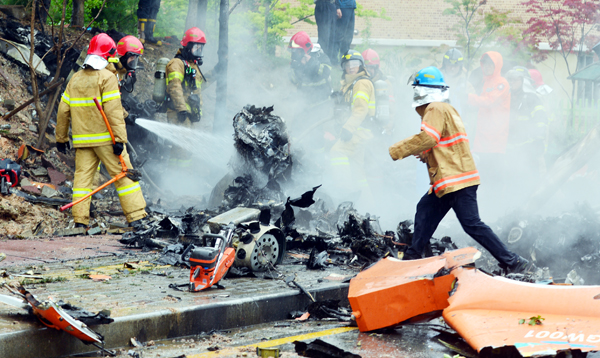 Firefighters work to control a fire after a fire department helicopter crashed in a residential area in Gwangju, South Jeolla, yesterday. All five passengers on board were killed. [NEWSIS]

A fire department helicopter crashed into a residential area in Gwangju, South Jeolla, killing all five people on board and injuring one civilian near the crash.

The helicopter, which belonged to Gangwon Fire Headquarters, crashed into a street near an apartment complex in the city’s district of Gwangsan at around 10:53 a.m., according to fire authorities.

The firefighters on board were on their way back to the fire department’s Chuncheon branch after participating in recovery efforts at the Sewol ferry disaster site. The ferry sank off the southwestern coast of South Jeolla, leaving 293 dead and 11 people still unaccounted for.

It was unclear what caused the crash, though the authorities cited weather as a potential cause.

At the time of the accident, it was raining and the wind speed was 12 meters per second (26 miles per hour).

The Gwangju office of the Korea Meteorological Administration said the local weather was a little foggy but not to the degree that flights would be cancelled.

“The weather was a bit foggy, but it was not serious enough to hamper pilots’ views,” it said.

The five firefighters were scheduled to depart at around 9 a.m. but delayed their flight because of the weather, fire authorities said.

The Gangwon Fire Headquarters said the helicopter was manufactured by Eurocopter Group, now renamed Airbus Helicopters, and had been used since 2001. It is not considered old given that the average lifespan of a firefighting helicopter is 20 years.

“We adopted it in 2001 and put it under regular checkups,” said a representative of the fire headquarters. “The latest checkup took place last month.”

On the ground, a female high school student was hurt after being hit by falling debris at a bus stop, authorities said. She received burns, but her condition was not life threatening.

The fire headquarters said that the doomed chopper began plummeting to the ground four minutes after it lifted off.

Witnesses said that the chopper was burning as it fell, triggering speculation that the helicopter had defects.

As the chopper crashed nose-first into the street, it burst into flames that quickly spread in front of an apartment building, setting alight tree branches.

The crash was so powerful that debris smashed through the windows of nearby buildings and shops, and struck vehicles.

A witness interviewed by YTN said the pilot appeared to deliberately steer the chopper away from the buildings and busier areas.

“There is an empty place between the school and apartment units,” said Kim Seong-kwon. “It seemed that the pilot looked for a less crowded place to crash.”

An apartment building is only 10 meters (32.8 feet) from the crash site, and hundreds of students were in class at Seong Deok Middle School, 15 meters away. A little farther along is a high school and elementary school.

The region is part of Suwon District, an area with schools, shops and apartment complexes.

Residents and shop owners spoke of the horrifying moment of the crash.

“I thought there had been a huge gas explosion,” said Choi Won-soon, a 45-year-old man who runs a Tous Les Jours shop near the site.

“The blast made me shiver and I could immediately smell smoke. I thought I was going to die.”

Kim said he called on his family to escape to the backyard of the bakery.

“We were taking courses on the fourth floor when the bang broke out,” he said.

“My friends and I ran to the window to see what had happened. Some of my friends were terrified and began crying and looking for their mothers, while others were asking if it was a UFO or something.”

The accident came after the country worries about public safety after the Sewol disaster in April.

More than 100 Navy, Coast Guard and fishing boats have joined the salvage operations at the site of the country’s worst maritime disasters off the southwestern coast.

As the salvage operation has gone on for so long, local firefighters have also joined.

The representative of the fire headquarters said it would take a year to ascertain the exact cause of the crash because it will take a while to recover data from a black box from the stricken helicopter.

“Usually an investigation of a helicopter crash takes time,” said the representative.

Whether communications between the control tower and the pilots worked well remained unclear.

Fire authorities said a division of the Air Force was in charge of communicating with the chopper during the flight. The division declined to comment yesterday.

“We are still looking into the case,” said a representative of the Air Force.

“We will make an announcement after sifting through records,” the representative said.

The government dispatched five experts from the Aviation and Railway Accident Board.

The government body under the Ministry of Land, Infrastructure and Transport has investigators specializing in aviation and railway accidents.

“The investigation will be led by that body and we’ll cooperate with it to make sure the probe is conducted in a transparent way,” the representative of the fire headquarters said.

Meanwhile, a fire broke out in an air conditioning unit of a subway train in Busan yesterday afternoon as it entered Busan City Hall Station. Four hundred passengers were evacuated safely. The fire was put out in 10 minutes.