No early open for Lotte Tower

No early open for Lotte Tower 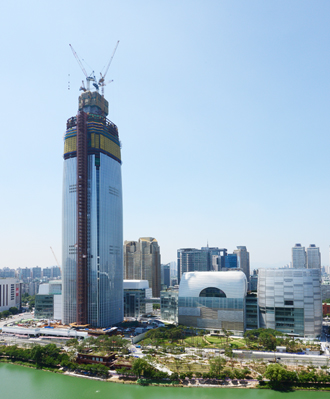 The Seoul Metropolitan Government announced yesterday that it has decided to hold off on an early opening for Lotte World Tower, currently being built in Songpa District, southeastern Seoul, citing that the building lacks specific safety measures and may cause traffic congestion in the area.

The Lotte World Tower, also known as the second Lotte World, is a complex with a 555-meter (1,820-feet) high tower, expected to be the sixth-tallest skyscraper in the world, and three low-rise buildings - a shopping mall, a department store and a multiplex cinema.

Lotte Corporation, which is in charge of building the complex, previously requested early openings for the low-rise buildings on June 9. The tower, however, is still under construction.

The city government had its related departments and institutions, as well as a civic advisory panel comprised of 23 experts, evaluate the construction site for the inspection, though they concluded that Lotte Group should come up with better construction safety considerations, emergency plans and measures to prevent traffic congestion in the area in order to open the complex early.

“The civic advisory panel said a more detailed examination is needed because the construction has provoked many social controversies, and hundreds of thousands of people are expected to visit when it opens,” said Jin Hee-seon, the head of the housing policy division with the city government.

The city government also requested that safety zones and measures be implemented to prevent anything from falling from around the construction site of the tower, which is slated to be completed at the end of 2016.

Lotte previously suggested certain safety measures, but the city government concluded that the plan should be more thorough, taking into consideration types of possible objects that could fall from various heights, their weights and what kind of impact they could have when hitting the ground.

It also requested Lotte create and implement fire-safety measures and emergency manuals for various types of disasters - fires, blackouts, collapse, earthquakes and other natural disasters. Controversy has also surrounded the reduction in water levels in Seokchon Lake, next to the construction site. The city determined that it was not undermining the stability of the tower, though further inspection is needed, as even experts have expressed varying opinions.

The public has also expressed worries over the stability of the construction and the land around it. The water in the lake has slowly diminished, which some citizens have attributed to water leakage into the surrounding site. Potholes around the construction area have also raised alarms.

“The Seoul Metropolitan Government will decide provisional opening of the second Lotte World based on how Lotte will complement its previous plans,” a city government official said. “We will consider its economic influence and job creation, but our top priority will be the safety of our citizens.”

Lotte has planned on opening the lower buildings in the complex since last year, but a series of accidents at the construction site have caused several delays.

In June 2013, a worker at the Lotte World Tower construction site died after he was crushed by a piece of heavy machinery.

A 38-year-old worker was also killed in April on the 12th floor of the construction site after he was hit in the head by a piece of metal that burst forward while he was testing the pressure of a pipe.