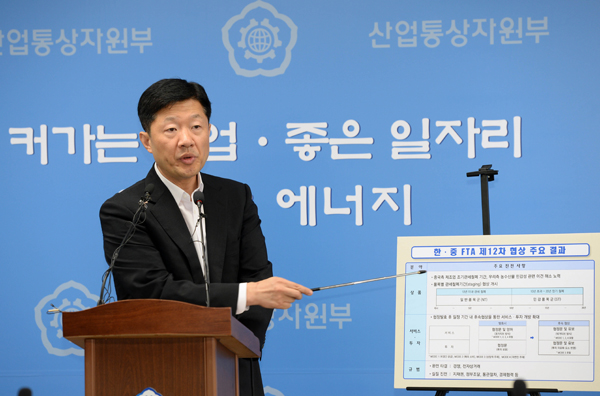 Woo Tae-hee, the assistant minister for trade and chief FTA negotiator explains the results of the government’s discussions on a pact with China yesterday. Provided by the ministry

The first free trade agreement (FTA) negotiation session between Korea and China since the two presidents met earlier this month ended yesterday after five days of talks during which little progress was made.

The two countries failed to decide where to draw a line to protect each country’s so-called supersensitive products, for which they can designate 10 percent of total traded products for long-term tariffs. Korea has long been concerned about its agricultural products and China wants to protect its petrochemical, machinery and steel industries.

However, the Ministry of Trade, Industry and Energy said that the negotiations advanced in the services and investment sectors.

“Korea and China have argued for the past two years over how to liberalize the services and investment market, but this time we finally reached an agreement,” said Woo Tae-hee, Korea’s assistant minister for trade and chief FTA negotiator at a briefing yesterday.

The two countries agreed to temporarily follow China’s method and will negotiate to open the market further after the free trade pact takes effect. Negotiations on the FTA are scheduled to continue in China in September.

When it comes to investments, the two countries decided to follow China’s plan to include protection clauses but later revise them to find middle ground and include clauses that liberalize investment.

When asked if Korea had given up on leading the negotiations, Woo said the temporary deal was inevitable because China needs time to make legal changes to gradually open its market to Korea and to shift its trade policy to the negative method.

“We will make sure to add a line about the time frame of additional negotiations into the FTA document in a bid to accomplish our initial position,” he added.

Despite their inability to come to a consensus on supersensitive products, Woo said that the past five days of talks were productive because the two countries discussed the number of years until tariffs would be eliminated on each product.

Until now, China and Korea had only categorized products into three groups based on the length of time until tariffs are eliminated: a normal group, from immediate elimination to 10 years; a sensitive group, which can be taxed for between 11 and 20 years; and a supersensitive group, which allows tariffs to be kept for more than 20 years.

Woo said that in the FTA, most Korean produce will be considered supersensitive products.

In the 11th negotiating session in May, Korea and China agreed to online market and competition regulations. Korean online businesses will be treated the same as Chinese companies.

The two countries also tentatively agreed not to relax environmental protection standards. Woo said it will be finalized at the next negotiation session after the Chinese central environment authority agrees to the move.