Members of farmer groups have their heads shaved in front of the government complex in Gwanghwamun, central Seoul, yesterday to protest the opening of the rice market. [NEWSIS]

The government officially announced yesterday it will open the domestic rice market from January 1 after decades of resistance from farmers, but impose a hefty tariff on imports to protect the domestic industry.

Bowing to the inevitable, the government decided to import more foreign rice than currently obligated to by the World Trade Organization (WTO) but to impose a high tariff to keep the amounts down.

Although the government did not announce the exact tariff, analysts and the press expect the rate to be around 400 percent.

The government’s decision was made at a time when Korea’s second waiver for so-called tariffication nears its end.

Tariffication means putting tariffs on imports under the condition that the market is opened to free trade.

The WTO Agreement on Agriculture imposes the tariffication principle on all agricultural products of member countries, but Korea was given a 10-year waiver in 1995 and another in 2004. The second waiver ends this year. 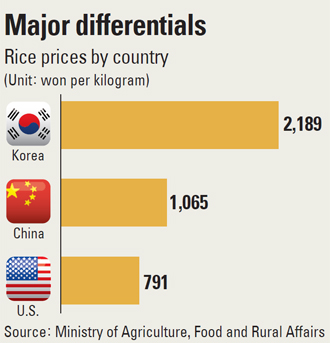 Korea has a plan to import 409,000 tons of foreign rice with a 5 percent fixed rate, known as tariff rate quota or TRQ, this year as an obligation set by the WTO. That is called market minimum access, known as MMA.

If Korea goes for a third waiver, the WTO will more than double the MMA volume, which the government believes will hurt the domestic rice market, especially since prices of domestically grown rice are falling as rice consumption dwindles.

The Philippines, the only country that has been given a waiver other than Korea, will have to increase its MMA volume by 2.3 times from next year through 2017.

At a press conference in the Seoul government complex in Gwanghwamun yesterday, Lee Dong-phil, minister for agriculture, food and rural affairs, said if the MMA volume more than doubles, the local rice market will face real competition.

“The current MMA amount is already a burden for local farmers,” Lee said. “The government made the decision very cautiously after more than 60 public hearings with farmers and experts,” the minister continued. “Even farmers accept tariffication, because they don’t want the MMA to increase further.”

According to ministry data, the current 409,000 ton MMA volume accounts for 9 percent of the nation’s total rice consumption.

The amount of domestically grown rice has also been decreasing, from about 4.7 million tons in 2005 to 4.2 million tons last year.

Lee underscored that the government will try to impose the highest possible tariff on foreign rice within a range stipulated by the WTO.

According to WTO rule, the tariff rate will be determined by a calculation of the average price difference percentage between a particular domestic rice brand and a foreign one. The two prices must be based on those between 1986 and 1988 when the Uruguay Round rice negotiation was concluded.

How the government will calculate the percentage is getting special attention from farmers. Farmers’ groups want the rate to be as high as 500 percent.

But according to the ministry’s calculation, a 400 percent tax may be enough to make domestic rice competitive in terms of price compared to foreign rice.

“If rice imports surge, the government will put a special tariff on them to protect the domestic market,” Lee stressed.

Under WTO rules, a country can put a so-called “special safeguard” tariff, known as SSG, if imports increase by more than 5 percent in addition to the MMA volume.

If Korea imports more than 420,000 tons next year, more than its given MMA, it can impose an additional tariff on top of the normal tariff. The SSG will be one-third of the tariff. If the rice tariff is set at 400 percent, the SSG tariff rate will be 120 percent, which will put a total of 520 percent tax on the surplus imports.

“In the case of Japan and Taiwan, which opened their markets in 1999 and 2003, their imports didn’t increase that much,” the minister said.

The government will discuss the rate and report to the WTO in September.

Members of the Korean Peasants League shaved their heads in front of the government complex yesterday as a sign of protest.

“It is not right that the government rushes to make the announcement,” one of the members said. “We want the government to keep the status quo by closely negotiating the issue with the WTO. The government is not telling the WTO what we want. It has already made a concession to it.”

The organization also claimed that if the government does not fix the tariff rate by law, the rate might go down eventually due to pressures from other countries.

Aware of opposition from farmers, the government will come up with measures to protect incomes of farmers and increase competitiveness of domestically grown rice, the minister said.