Newest trend in retail is moving in with one another

Newest trend in retail is moving in with one another 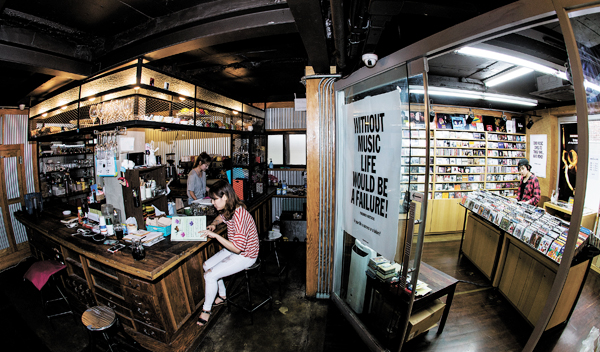 Blues, jazz and classical music pour out of a record store that has moved its business into the coffee shop B. in Hongdae, Seoul. By Kim Seong-ryong

The music was selected by the 52 year-old Pyo Jin-young, owner of a record store. The record store is more than a close neighbor of B. In fact, it shares premises with the coffee shop.

It has its own corner on the second floor of the three-story coffee shop.

The retail shacking up dates to May 2012. Pyo’s record store had been a significant influence on the music scene in the young and artistic neighborhood of Hongdae since it opened up 13 years before. But the owner of the building housing the store sold the property and Pyo was being forced to move.

To relocate, Pyo needed at least 250 million won, which he didn’t have. He was about to fold the store when people from B. approached him. They suggested he move his store into their coffee shop, to become a “shop inside a shop.”

“The people from B. said they would give me space,” Pyo recalls. “All I had to do was provide quality music.” He said the suggestion was mind blowing: a win-win for both parties. Pyo found a new home and B. attracted more customers because of the good tunes.

It worked better than anyone expected. B.’s popularity did indeed soar as people flood in for the exceptionally good music. Pyo didn’t have to worry about rent and he got more customers from the coffee drinkers. His sales, which were around 400 million won in 2009, more than doubled.

Last month an accessories boutique also took a spot at the entrance of the coffee shop’s second floor as a popup store.

“I know how difficult it is to start a business so I allowed it to set up with barely any commission,” said Lee Han-seong, B.’s owner. “Now we have three businesses under one roof.” Cohabiting businesses is becoming common enough in Korea for terms to be invented. There are several ways to cohabit, which realtors are now calling “sharing” and “shop-in-shop.” 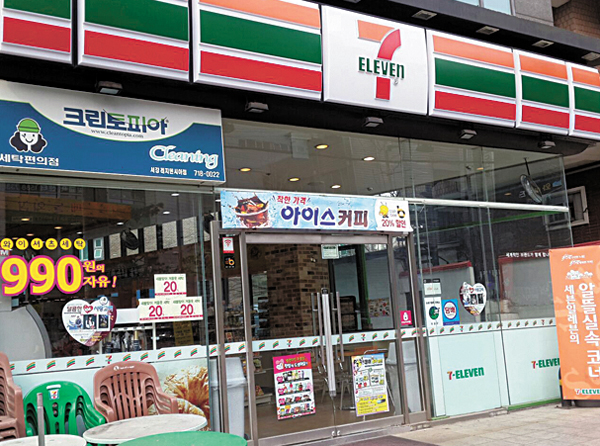 Cleantopia, a franchise laundery business, operates within a 7-11 store in Mapo, western Seoul. Provided by 7-11.

Sharing refers to a space that has one business operating during the day and a different one at night. Sometimes the businesses are run by different people, but sometimes the same person runs both.

Shop-in-shop is where two different businesses share the space simultaneously, like B. and the record store. This is also the setup when a barbershop shares space with a nail salon, a drugstore has a corner in a convenience store, or a barbershop has space in a bathhouse.

Now other businesses are picking up the idea, especially with a weak economy and rising costs for retail space leases in some areas.

For small store owners not only will this new system ease their burden on rent payment but it also allows those who are just starting up business to set up shop at low cost.

Kim Dae-hyun, 39, who runs a chicken and beer restaurant, or hof, in Gasan Digital Valley in southwestern Seoul has recently been basking in increased revenue since he started a whole different business during the day. Daytime sales are of light snacks like hamburgers and in the evening he switches over to beer and chicken. The idea has been so successful that his daytime sales cover his rent now. The even larger sales from beer and chicken are pure profit.

“I’m looking for another space where I could sell coffee during the day and run another business at night,” Kim says.

There’s a 123 square-meter space in Seocho, southern Seoul, that has been running two different businesses for the last three months. During the day it is a Korean food buffet but at night it turns into a Japanese bar. All 80 seats have been filled every lunch hour since the owner started the service. After dark, business has flourished too.

A 7-11 in front of Sogang University in Mapo, western Seoul, has a laundry service in the same space.

The 46 year-old owner, Kwon Hae-young, decided to invite the laundry in because there are a lot of students living around the campus.

She says the idea worked as 20 percent of the store’s revenues are contributed by commissions from the laundry.

“And as people who come in to leave their laundry buy light snacks, the convenience store revenues have gone up as well,” says Kwon.

Another 7-11 in Mapo signed an agreement with the franchise laundry Clean Speed and has been running both businesses under a single roof. It says its revenues are 40 percent higher than the average convenience stores since the laundry service moved in and 45 percent is contributed by the laundry.

Park Kyung-han, 37, runs an ice cream shop in Anyang, Gyeonggi. As sales tend to drop during the winters, Park decided to make use of some empty space and started a hotdog business. The cost of starting it up was only 15 million won, which is only 10 percent of what it cost to start the ice cream shop to begin with.

But thanks to the hotdogs, revenues have gone up 30 percent.

Recently nail salons have popped up in jimjilbang, Korean saunas, accessory stores selling necklaces and earrings are opening up in stationary stores and food take outs are inside gas stations and convenience stores.

As the trend catches on, some entrepreneurs have set themselves up at retail matchmakers, introducing businesses to each other in hopes they will cohabit.

“We get three to five calls every day from existing stores while there are seven to ten calls a day from those who want to find space to set up,” says Choi Dae-hun, president of a company called My Shop On Shop.

“They’re looking for a wide variety of partners whether they be lunch buffets, noodle shops, cafes, franchise stores or realtors,” Choi said.

But cohabitation brings potential for conflict too. Two different businesses under one roof have the potential of conflict. The new or invited-in business shouldn’t damage the original trade run by the owner or renter of the space. Business hours have to be made clear to partners and customers.

And each business has to be responsible for sanitation and other management issues.

The optimum floating population, analysts say, is 1,500 people per hour.

Businesses that share space should also complement each other to create synergy, like a takeout coffee shop in a gas station.

Another potential conflict involves the rights of the business that moves in. In most cases, the newcomer pays monthly rent without a deposit or a commission on sales, or both. If the original business owner ends his lease on the space, the new tenant may not recognize any rights for the cohabiting business.

“The business that moves in should have a contract that clarifies the payments as well as the period of rent,” says Chang Kyung-chul, an agent for Korea Establishment Realty.