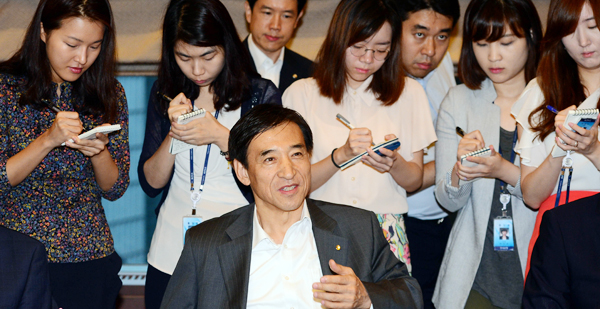 Bank of Korea Governor Lee Ju-yeol speaks yesterday before commencing his monthly meeting with local bankers at the central bank’s headquarters in central Seoul. The governor stressed that the policy rate decision is the sole responsibility of the central bank. [NEWSIS]

Tensions between the finance minister and the governor of the Bank of Korea over the policy rate intensified on Thursday, while market expectation for a rate cut as early as next month continued to build.

“Didn’t Deputy Prime Minister of Economy Choi Kyung-hwan mention that he wouldn’t address the policy rate, as it is an issue that is decided by the [BOK’s] monetary policy committee?” Governor Lee Ju-yeol said yesterday before holding a monthly meeting yesterday with local bankers at the central bank’s headquarters in Seoul.

“I believe he will likely maintain that view, even at this moment.”

His comment was in response to an earlier remark by Choi, the country’s new deputy prime minister and finance minister.

While addressing lawmakers on Thursday at the National Assembly, Choi indirectly touched upon the need to lower the nation’s key interest rate to boost the economy, which has been scaling back on the rising won against the U.S. dollar. Additionally, domestic consumption has been weak following the April 16 Sewol ferry disaster.

The central bank last week shaved off 0.2 percentage point from its previous economic growth outlook for this year, from 4 percent to 3.8 percent.

“I think it is inappropriate to publicly address the policy rate, which is an issue decided by the monetary policy committee. I believe my thoughts [on the issue] have already been delivered to the market,” Choi said at the National Assembly.

“When the interest rate is cut, the loan interest payment burden will shrink and this will lower the burden on households,” he added. “It will not worsen household debt.”

The comment contradicted an earlier concern raised by the governor.

On Wednesday, the BOK’s head said even if the policy rate is lowered, the positive impact it could have on the economy will likely be limited.

He said the burden on repaying debt may ease if the interest rate is lowered, but it may not result in larger spending by the average household, which could boost the domestic market. “The burden in repaying loan principals will ease, but it also means that disposable income will shrink,” Lee said.

Instead he warned that the nation may end up with increased debt, which may tighten household spending.

As of the first quarter, household debt, including credit card purchases, was at its all-time high at about 1 trillion won. Yet the dovish Choi has continued to pressure the central bank indirectly to lower the rate.

Yesterday at the economic ministers meeting in central Seoul, Choi once again stressed the need to resort to bold measures, hinting at the urgency of a rate cut.

The economy, he said, is in a much worse state than was generally perceived. “The economic recovery is much weaker than what we had expected earlier and as [the recovery] has been holding back, we’re in an urgent situation where the economic recovery momentum could die out,” Choi said, adding that the government might have to take unprecedented measures.