The world doesn’t change so easily

The world doesn’t change so easily 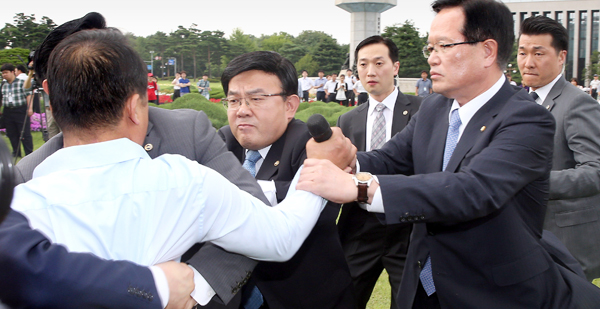 As I am writing this column, 43 Danwon High School students are marching from Gwangmyeong to Seoul. They are the sons and daughters who barely escaped with their lives from the half-sunken Sewol ferry three months ago. They are the children who survived because they were on the deck when the accident happened and jumped into the water or were fortunate enough not to listen to the captain’s announcement to “stay put no matter what.”

The survivors arrived in public for the first time since the tragedy, and the destination of their two-day march was the National Assembly. They walked 47 kilometers (29 miles) on foot to join the hunger strike of the parents of their classmates who died trapped in the ferry. The students stayed the night at the Seoul Metropolitan Young Workers’ Welfare Center, but no members of the National Assembly visited them. Instead, citizens shared their grief and appreciated their efforts.

Three months after the Sewol ferry tragedy, the world hasn’t changed a bit. Prime Minister Chung Hong-won resigned after taking responsibility for the government’s lethargic response to the disaster only to be reappointed by President Park Geun-hye. The leader of the ruling party at the time of the calamity has been nominated for education minister and vice prime minister for society. A military operations specialist has been named the deputy minister for social safety.

The members of the National Assembly who openly rebuked victims’ parents failed to pass the Sewol ferry special act by the promised deadline. The ruling party lawmakers fear that the truth-finding committee would create an independent investigation authority and conduct searches and seizures on the Blue House.

Last week, my car was stopped at a checkpoint on the way to Gogeum Island from Gangjin, South Jeolla. Six police officers, three on each side, were lined up, stopping cars that passed the checkpoint. But they did not ask that I open the window or the trunk. I was wearing sunglasses and a hat, and they briefly glanced at me and waved a signal to let me pass. I was stopped for less than two seconds as were the other cars in front of me.

That’s how the search for Yoo Byung-eun - the de facto owner of the ferry and a fugitive - has gone, even after 1.3 million officers have been mobilized. They are no different from the rescue workers hovering around the ship and the Maritime Traffic Control Center staff who were not doing their jobs as the Sewol sank.

On a recent television drama “Jeong Do-jeon,” the title character dreams of a new world, but powerful aristocrat Lee In-im tells him, “You may be buoyant and hoping in vain for now, but you must remember one thing. The world doesn’t change so easily.” The dialogue came from the writer’s imagination, but it reflects reality candidly. Citizens pledged national reforms and social changes with a yellow ribbon, but frustration and a sense of shame have made the passion subside.