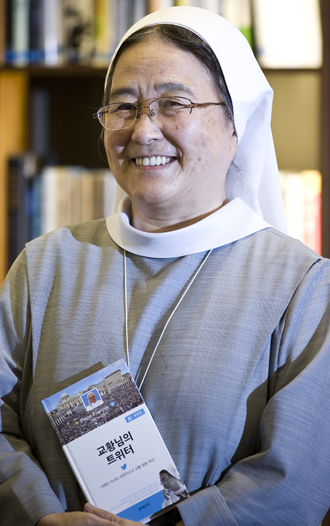 Lee Hae-in, a Catholic nun and renowned poet, has many interests, but one may be more obscure than the rest. The 69-year-old Catholic nun recently shared her experiences with the press and readers on how she came to publish a book on Pope Francis’ tweets.

The Catholic Church’s head pontiff does indeed have a Twitter account - and designated as the most influential Twitter user this year, with more than 14 million followers, beating out even U.S. President Barack Obama.

According to PR firm Burson-Marsteller’s Twiplomacy 2014 study, wherein the Twitter accounts of world leaders and heads of state are analyzed, each of the pope’s tweets are retweeted nearly 17,000 times.

“I meditated over the pope’s Twitter messages,” Sister Lee, of the St. Benedict Monastery, said during a recent press conference held at the Franciscan Education Center in central Seoul. “And I became a true follower.”

Lee is the author of numerous collections of poems, and said she “tried to understand a little better the deep meaning behind the Pope’s short words.”

So she decided to compile his messages alongside her musings in her new book, “The Pope’s Twitter,” published recently by Bundo Books.

Pope Francis is scheduled to visit Korea from Aug. 14-18, the first visit by a pope to the Korean Peninsula in 25 years. During his trip, the pontiff will attend the Sixth Asian Youth Day, a religious event for young people from around the continent, at the 15th -Century Haemi Castle in Seosan, South Chungcheong, and preside over a beatification ceremony for 124 Korean martyrs.

“This year marks six years since I had surgery for cancer,” Lee said, adding that she has not fully recovered since the illness was already advanced when she was first diagnosed.

“After lunch, I rest for a bit. As I meditate over the Pope’s Twitter messages, the cancer cells seem to melt away.”

When asked to summarize Pope Francis in one word, Lee said, “He is a very splendid person.”

“While sticking to the regulations of the monastery, he is free and open,” she said. “He also has a humanistic sense of humor. He doesn’t only speak of love through words, but shows it through actions.”

This year marks the 50th year since Lee became a nun. Each day, she writes in her journal as an ascetic and a believer of God. She places her journal entries next to the pope’s Twitter messages.

“I have written 1,000 poems over the years. I wrote that many poems, but what is the worth of my life? I have reflected on this. To become a person of prayer that is the same inside or out, and a person of belief, how difficult is this? This is what I looked at.”

“It is hard to forgive others,” Pope Francis wrote in a Tweet last year. “Lord, grant us your mercy, so that we can always forgive.”

Lee weighed in on the pope’s words.

“I have thought that a single forgiveness is a greater prayer rather than thousands of prayers memorized by the lips. When you realize that you actually haven’t forgiven someone that you thought you had forgiven, or when you thought you were already forgiven but haven’t been forgiven, how difficult and agonizing is it! In such cases, I myself reflect on death and enter into an imaginary coffin. Then, it is somewhat easier to forgive.”