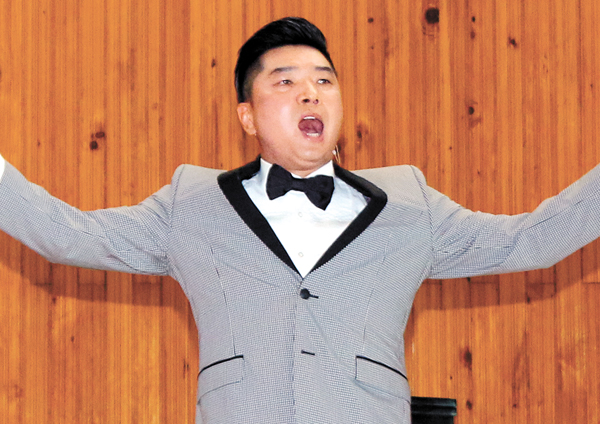 Tenor Im San performs a free concert on July 11 at Bono Middle School in Ansan, Gyeonggi. It was Im’s first free concert and talent donation this year offered, in part, to heal emotional wounds from the Sewol ferry disaster. Provided by Im San

In his first free concert of the year on July 11, Tenor Im San concluded his performance with the classic Neapolitan song “O Sole Mio.”

Barely a second after he had finished the last line, he was given a standing ovation by the nearly 700 students in the audience. The concert was organized and performed by the 49-year-old singer at Bono Middle School, chosen because of its location in Ansan, Gyeonggi, home to the hundreds of Danwon High School students who lost their lives in the Sewol ferry disaster last April.

In an interview with the JoongAng Ilbo shortly after his performance, Im said he insisted on holding his first free show there to honor those who died in the tragedy.

“I chose songs that are bright in tone because I was worried that I could make them cry again with emotionally charged songs,” he said, adding that he was happy to see his teenage audience light up during his performance.

Other students from Shingil High School in Ansan also attended his concert in Bono Middle School’s auditorium. Many of the students from both schools are related to the victims.

A graduate of the Milan Conservatory in Italy, Im has held nearly 200 concerts since 2010 at schools nationwide. His first free concert this year was originally scheduled to be held in April, but was delayed due to the tragic sinking. “Looking back, I realized I only spent about 80 days performing on stage, though I was one of the busier singers during the year,” he said. “Other than those 80 days, I was virtually unemployed. I thought I could use that time for something much more meaningful.”

Eager to convey a public message in his performances, his concert series this year is entitled, “Loving Your Friend,” his own stand against school violence. When he started the program four years ago, he did it with three to four of his fellow musicians and one pianist. But as his free performances have gained recognition and popularity, he now sings with an eight-member chamber orchestra.

Im said he tries to intrigue the youngsters, especially those who may not be familiar with opera and classical music.

“Nella Fantasia” is the most popular song among my teenage audience,” said the singer, who recalled that some of his listeners have even sent him thank you emails after his shows.

“It may be hard to give young students a chance to have a cultural experience, like a musical concert,” he said, “but we should strive to give them such opportunities no matter how difficult it is.”

Im’s concert project this year is sponsored by the CJ Cultural Foundation, GS Caltex and Hayne Shipping. His next scheduled performance will be held on Tuesday at Wolbong Middle School in Gwangju.

Schools that wish to have him perform later this year can submit requests on the Korean Teachers’ Credit Union webpage at http://www.ktcu.or.kr/.