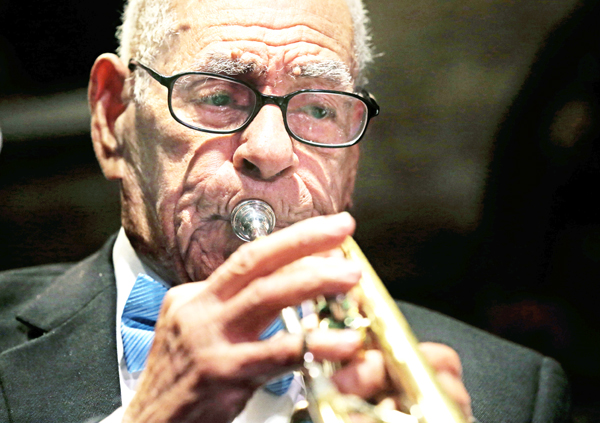 NEW ORLEANS - Centenarian jazz musician Lionel Ferbos died Saturday at his home in New Orleans, days after celebrating his 103rd birthday on July 17 with friends and family in the French Quarter.

Ferbos performed all over New Orleans and its suburbs for decades. His ability to read music made him an in-demand musician for gigs that took him to parks, schools, churches, dance halls and even prisons. He also performed at his 102nd birthday party and at every New Orleans Jazz and Heritage Festival until last year.

Ferbos was believed to be the oldest working jazz musician. He was also the last living member of the WPA band, which was formed during the Depression by laborers in the city’s Works Progress Administration.

He had recently become too weak to hold his trumpet, but family members would occasionally hold it to his mouth so that he could blow into it, Schexnayder said.

“He missed it so much, but his arms just weren’t strong enough to hold it up,” she said.

Early on, Ferbos performed with New Orleans society jazz bands at well-known venues such as the Pelican Club along Rampart Street - a downtown strip that in the 1920s and ’30s was the epicenter of the city’s bustling black entertainment district.

He performed with Walter Pichon and Captain John Handy in the ’30s, earning little more than a dollar a night. He also performed with saxophonist Harold Dejan and trumpeters Herbert Leary, Gene Ware and Sidney Desvignes, as well as blues singer Mamie Smith.

“He was very advanced and technical for his time,” said Dixieland jazz musician Lars Edegran, who performed with Ferbos for decades with the New Orleans Ragtime Orchestra, a group formed in the 1960s to revive the old music unearthed in the jazz archives at Tulane University.

“You needed advanced music reading skills to play in the orchestra, and Lionel was a very well-trained musician,” Edegran said. “He was very professional on stage, a beloved person, and there’s just nobody else like him.”

Ferbos had a unique voice and a knack for soft, sentimental hits like “When I Grow Too Old to Dream” and “The Beautiful Dreamer.”

Though he performed almost exclusively in New Orleans, Ferbos did make eight tours of Europe with the ragtime orchestra. He was also part of the original stage band of the off-Broadway hit “One Mo’ Time,” though he dropped out of show in the ’70s when it moved to New York.