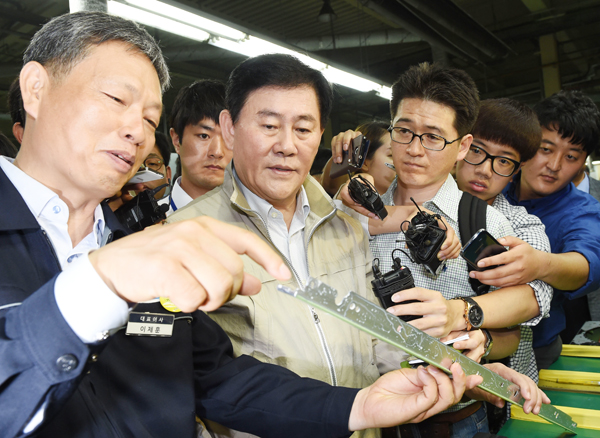 Strategy and Finance Minister Choi Kyung-hwan, center, listens to Lee Je-hoon, CEO of Pavonine, a small-sized industrial components manufacturer. The new minister visited the company’s headquarters in Incheon yesterday to see the conditions of small and midsize companies.Provided by the ministry

Finance Minister Choi Kyung-hwan said he will foster and invest in small and medium enterprises at a conference yesterday with eight SME CEOs held at Namdong Industrial Complex in Incheon.

It is the second field visit by the new finance minister after he went to Seongnam Labor Market in Seongnam, Gyeonggi, to meet with low-income workers on Thursday, a day after his inauguration.

He emphasized the role of SMEs, saying that small and midsize companies underpin our economy as they account for 99 percent of businesses and 88 percent of jobs in Korea.

“The master key to upgrade our economy is in the hands of SMEs,” said Choi. “As the economic downturn has dragged on for several years, the confidence of businesses has weakened.

“We must change the atmosphere to be lively and hopeful. In order to do that, it is important to boost the morale of business leaders.”

In accordance with the determination of the finance minister, the government decided to implement the accelerated depreciation first, as SMEs are investing less in their equipment and facilities.

According to the Financial Services Commission, large conglomerates’ investment in equipment and facilities decreased 3.9 percent last year, while that of SMEs’ dropped 14.1 percent.

The government plans to increase temporary tariff reductions on SMEs’ imports of products for their factories from the current lowered tariff rate of 30 percent to 50 percent.

The SMEs also requested that the minister come up with measures to encourage the young work force to take jobs at industrial complexes.

To help, Vice Trade Minister Kim Jae-hong, who also attended the conference, said the government will try to upgrade the aging industrial complex to attract young employees. Kim promised to choose 17 industrial complexes to be reformed by 2017.

“We also believe that sustainable growth of SMEs will be difficult unless the young work force and innovative companies join with industrial complexes,” said Kim.

“We are working on transforming 17 aging industrial complexes to innovative industrial parks by 2017.”

The finance minister also mentioned that SMEs have been struggling due to the currency fluctuation.

“This year, I know that the companies have had difficulties in exporting due to the rising value of the won,” Choi said.

“The government will strengthen its support for SMEs that face challenges from the currency rate through foreign exchange risk insurance.”

The Korean won has been advancing against the U.S. dollar since the second half of 2012. Although the influence of the rate on companies has diminished, SMEs’ responsiveness to a strong won is lacking compared with large conglomerates.

“I will seek measures to support SMEs that see damages from the exchange rate, but I also ask the SMEs to produce products that are competitive in terms of quality, so that they can lead the price competitiveness in the market,” he said.