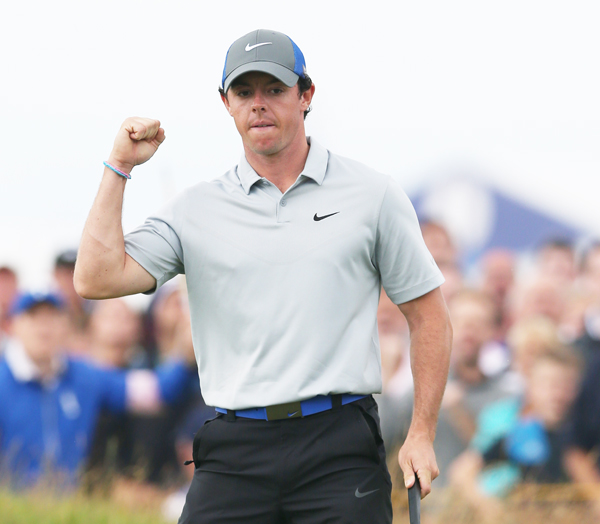 Rory McIlroy of Northern Ireland eagles the 16th hole Saturday during the third round of the British Open at Royal Liverpool golf club in Hoylake, England. [AP/NEWSIS]

Rory McIlroy looks as if he has just thrown a knockout punch at the British Open, and it was only Saturday.

When he rolled in a 10-foot eagle putt on the final hole for a 4-under 68, he straightened his back, stared defiantly at thousands of fans crammed into the horseshoe arena around the 18th green at Royal Liverpool and lightly pumped his fist.

In little more than an hour, he went from being tied for the lead to six shots ahead of Rickie Fowler.

And suddenly, the biggest challenge facing the 25-year-old from Northern Ireland was reminding himself that he had one more round left.

McIlroy can’t afford to picture his name etched on the base of that silver claret jug. He can’t think about what it will be like next April to drive down Magnolia Lane at Augusta National with a shot at becoming the sixth player to capture a career Grand Slam.

“I’m not taking anything for granted,” McIlroy said.

He knows that from experience, good and bad. He blew a four-shot lead at the Masters in 2011 and shot 80 in the final round. He had an eight-shot lead at the U.S. Open two months later and set two scoring records to win by eight. And just two months ago, McIlroy came from seven shots behind to win by seven.

The six-shot lead was the largest at The Open since Tiger Woods led by six at St. Andrews in 2000.

Even so, McIlroy was doing his best to preach caution.

History is on his side.

No one has ever lost a six-shot lead in the 121 years the Open has been contested over 72 holes. Boy Wonder would not seem to be a candidate.

“What you have with him is he’s just so explosive,’’ Jim Furyk said after a 71 left him 10 shots behind. “He won the U.S. Open by eight shots. He obviously doesn’t have any issue as the front-runner, and has no issue trying to extend that lead, much like Tiger used to.’’

“If I’m able to go out and get off to a good start, maybe I can put a little bit of pressure on him,’’ Fowler said after a 68. “Because he’s definitely in control of the golf tournament right now.’’

Fowler, who was six shots behind going into the third round, ran off three straight birdies to start the back nine and shared the lead when McIlroy made bogey on No. 12.

It all changed so quickly.

Fowler made a bogey on the 14th hole. McIlroy, playing in the group behind, drilled a 35-foot birdie putt that put his lead back to two shots.

“Rickie was just getting close to me,’’ McIlroy said. “I could hear the cheers in front of me. I just wanted to get ahead. To hole a putt like that was huge.’’

And that’s when he turned it on.

McIlroy blasted a drive on the par-5 16th hole and hit a 4-iron from 252 yards over a pot bunker to the left side of the green and made a 15-foot eagle putt. That restored his lead to five shots, for Fowler had driven into a pot bunker and made a bogey.

Fowler recovered with a superb shot out of the pot bunker on the 18th to tap-in range for birdie. That put the American into the final group for the second straight major, both times a long way out of the lead. He trailed Martin Kaymer by five shots going into the last day of the U.S. Open at Pinehurst No. 2.

Fowler didn’t get closer than four shots from Kaymer in the final round.

Sergio Garcia, who played in final group with Woods at Royal Liverpool in 2006, certainly had his chances. He was only three shots behind at the turn until missing a short birdie putt on No. 12 and failing to convert so many other chances. Garcia had a 69 and was seven shots behind, along with Dustin Johnson (71).

And yet the biggest crowd belonged to Woods, the sport’s biggest star who is playing his first major since back surgery four months ago. Woods narrowly made the cut on Friday, opened with two straight birdies and that was about all the excitement. He made another double bogey, another triple bogey and shot 73.

Woods was 19 shots out of the lead.

The biggest challenge for McIlroy might be to avoid looking ahead. It was hard. Asked what it would mean to be one major away from a Grand Slam at 25, McIlroy said, “It would mean a lot of hype going into Augusta next year.’’

“I’d be in pretty illustrious company,’’ he said.