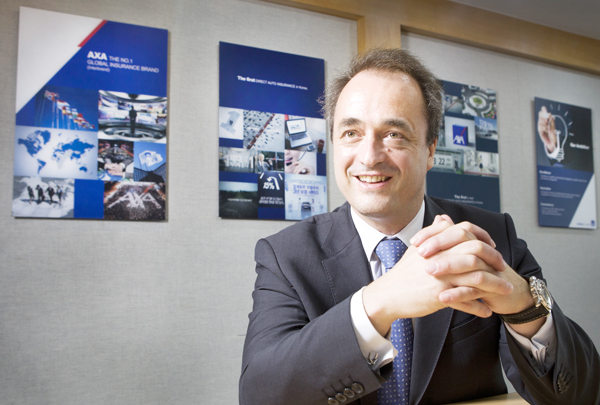 Xavier Veyry, CEO of AXA Direct Korea, which in 2001 became the first company to introduce direct auto insurance in the fourth-largest Asian economy, has a special love of the IT business, and believes every aspect of data and business will eventually be digitalized.

The Frenchman sat down with the Korea JoongAng Daily last month to talk about the growing partnerships between the insurance and IT industries.

Though he said it is tough to tell, Veyry didn’t stop talking about his favorite IT companies.

“Apple is incredible in opening new markets and successful in making design a convenience to customers,” he said. “Samsung is extremely good at bringing all sorts of experiences together - different technologies and interaction choices. Samsung is proving to be extremely good in leveraging those opportunities.”

He also mentioned LinkedIn, with its many loyal customers and Google, praising its innovation.

“The key point is they are definitely companies that are strongly innovative,” he said.

In contrast to the stereotype that people who work in finance are obsessed with numbers and profits, Veyry seems more focused on innovation and ideas that could improve the insurance industry.

His definition of innovation is trying to solve customers’ problems by understanding customers’ expectations.

“Understanding what customers need and expect is the best recipe for designing a new product,” he said. “Insurance is evolving and there are a lot of opportunities for innovation. It is evolving because customers are aging, technology is different and cars are very different now.”

In April, AXA Direct Korea launched a new line of auto insurance packages, called AXA Customized Auto Insurance, which consists of nine plans, such as For Baby, Schooling, Brand New Car, or Inexperienced Driver, hoping that they would draw customers because of their simplicity. The company also developed a platform called Channel 3.0 to capitalize on wireless technology and encourage signing up for insurance through PCs, smartphones, tablets and phones.

“Consumers’ reaction has been very good to the Channel 3.0 because of seamless interaction,” Veyry said. “They start interacting with us through smartphones, give us a call later on, carry on with Web or tablet PCs. People don’t have to repeat anything, so the interaction is very efficient.”

On the new platform, the average duration of talking about insurance and checking prices is four minutes and 20 seconds, making interactions with consumers much quicker, he explained.

Left: CEO Xavier Veyry congratulates agents on their superior performance at the Golden Call event in 2012. Middle: Veyry speaks at a press conference to celebrate the launch of its Customized Auto Insurance in April. Right: Veyry and employees attend AXA Direct’s annual corporate responsibility week, which includes an environmentally-friendly walk and public charity bazaar last year. Provided by the company

Q. Why do you think innovation is important in the insurance industry?

How do you encourage your employees to be innovative?

Innovation is not a matter of one person. It’s not the traditional way. First, we need to listen to customers and better understand customers and interact with them. We systematically capture their needs, identify trends in their needs. Then, we need to translate those needs into action. We need to take risks and accept the changes. We need to take a risk and I think the culture I would love to see in the company is a culture of risk takers, which is a very different bet - talking about taking measurable risks and understanding what is at stake. We also need to accept that we might make wrong decisions, must accept that we can fail. But when we fail, we must fail fast. Listen, put customers in your shoes, take a risk. We have some chances to promote the creativity of employees. Creativity should not be restricted to outside of the company. Innovation is a day-to-day process. We cannot ask people to be innovative for two days per year. They must be creative every day. [We] must give them opportunities and the environment. Innovation is a journey, a process, not an achievement.

Is AXA Direct increasing its cooperation with mobile companies in Korea?

At streets, parks, the metro, restaurants and coffee shops, people are always using their mobile phones, and in the rest of the world as well. Smartphones are changing people’s lives and that makes life easier. Why wouldn’t it be easier for your insurance? Of course, we also believe we cannot replace human interaction. But providing services to customers, gathering info, seeing prices, making choices, comparing and getting recommendations should be facilitated by smartphones. When people have accidents, we can send tow trucks and accelerate the process through technology. This is the right direction. We are working with some local mobile companies, for instance KakaoTalk. We have almost 300,000 KakaoTalk friends and 30,000 endorsements through KakaoTalk every month. It is a convenient way to interact with us. Again, people’s consuming pattern goes with smartphones.

After three years in Korea, are you familiar with Korean culture now? Have you found any interesting habits of customers?

I think Koreans are very educated in terms of insurance. They know what they purchase and are aware of the product. Their level of knowledge and education, specifically in motor insurance, is very high compared to other countries. People are very curious and welcome new innovations. Korea is a very interesting market for what could become a trend in other countries as well. Compare it to China; the population is much smaller, but compared to Portugal or Spain it is bigger. So, it is not a small market but a decent-sized market with a very strong economy. For us, Korea is important. We believe in it and we are happy to be here.

Many foreign businessmen refrain from coming to Korea with their families because it’s quite hard to live here with a family. Do you agree?

The Korean environment is very different from Europe. It’s true that coming to Korea is an opportunity but it is also making sacrifices, accepting to be far away from families, parents and friends. [It’s also difficult] to live in an environment where the code of living is very different. In France, people are very direct. In Korea you cannot be too direct, it does not work. People communicate more indirectly, although it is more direct than other Asian countries. Of course, going to Korea like any expatriation is accepting a challenge. It’s true for Korea, Saudi Arabia, maybe for other countries. Every country is different and adjusting is always a challenge. Is one more different than the other? That depends on perception. I don’t really think there is one that is more difficult than any other.

The government is trying to attract the headquarters of many foreign companies to Seoul by providing tax benefits. Does AXA Group have any related plans?

We made a decision 18 months ago that our direct business will be centralized in Asia. In AXA, we have 10 countries that we have direct business in, three of which are in Asia. Two are pure AXA companies and one in China is a joint venture. We decided one and a half years ago that we will create a center of excellence in Korea and in other countries. The decision was not based on taxes but it’s true that it corresponded and is in line with the government’s aspirations. We are one of very few [companies], if not the only one, that has made this decision.

Are there challenges in the growth of the direct insurance business, because of high loss ratios and low premium ratios regulated by the government in Korea?

I do not necessarily share your opinion. I think the prospective is quite significant. First, there is more and more technology. One big barrier to direct insurance is that we can’t have face to face interaction. So how can I trust an insurance company? In accordance with the way technology is evolving, now we are completely changing the paradigm. In the near future, all company data will exist in the digital world. That will help companies give better services to customers. The direct business model will be even more efficient than face-to-face business models. Point number two is the price of vintage. In the direct model, we are seeing that the dynamics in the market are still going through an increase. Korean people purchase most of their goods online. Internet banking and mobile banking are developing extremely fast. Then why is it different for insurance? There is a saying that today, most of the direct market is for auto. Other insurance products can also work that way. Provided they are simple, convenient, and absolutely transparent for the customer. I don’t see price as an issue. Long-term prospects will have to do with people’s consuming evolution.

You want to make AXA Direct into a digital company. What kind of specific efforts are you making? Any investments?

For me, a digital company means leveraging technology that way. So I believe that we’ll be leveraging technology as much as possible but interacting with and really blending it is human interaction. Yes, we are investing a lot. We invested a lot in Channel 3.0 and technology, and we are investing a lot in analytical skills. Again, I think that the future of insurance is to listen to more specific needs of people. From very generic products we are moving to much more targeted products because everybody’s different. And I think this is a worldwide trend. We have plans to launch new products, new technologies, new ideas and we are already working on the next generation. 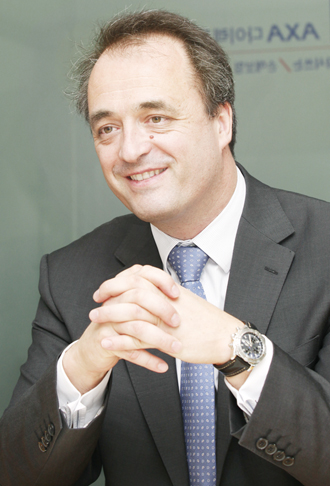