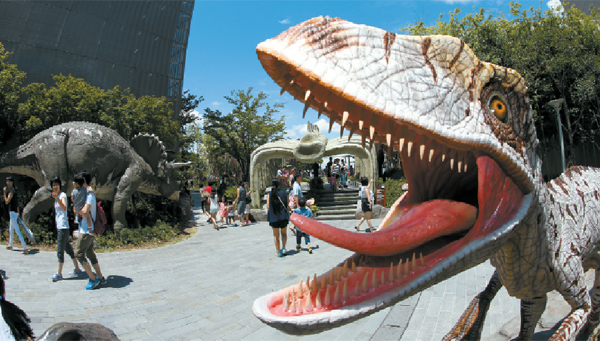 A statue of a Velociraptor greets customers at Dinosaur Land at the 3,967-square-meter (42,700-square-foot) Zooraji Park at Shinsegae’s Centum City in Busan. It is one of the most visited areas of the department store. The Korean retail giant plans to expand amusement parks and aquariums at its retail venues. Provided by the company

Companies are increasingly escaping from marketing myopia, also known as nearsighted strategies, by finding inspiration from other industries.

Son Gi-eon, a managing director at Shinsegae Department Store in charge of planning the retailer’s transit center shopping mall in Daegu, traveled to Dubai last month. During his visit, he spent most of his time at Dubai Mall’s aquarium, which contains more than 30,000 sea animals, including 300 sharks. He also spent time admiring the aquarium at the seven-star hotel Atlantis. Analyzing sales wasn’t the first priority on his Dubai trip.

The executive’s business trip was part of the Korean retail giant’s net initiative.

“We are trying to build a department store that is more than a space that simply sells products,” Son says. “We are aiming to attract customers who would otherwise spend their time on the weekends and holidays outdoors at an amusement park, the zoo or baseball stadium.”

To reach that goal, the multiple transit center in Daegu, which will be completed in late 2016, will have a large aquarium - the first in the domestic retail industry. The planning committee has been researching aquariums around the world for three years to create the right size and pathways for the center’s aquarium.

The center in Daegu will also include an indoor theme park of 9,917 square meters (2.4 acres). Shinsegae is giving the park more attention than the 3,967-square-meter Zooraji Park at the store’s Centum City in Busan, which was built last July. Zooraji Park consists of five zones, including Dinosaur Land, African Village and the Pirate Ship. All facilities are free except for the carousel, and the park can accommodate 300 people.

“We estimate we could make 400 billion won [$388 million] more per year if we installed sales desks instead of the theme park or aquarium,” Son says. “But we decided to look at it over the long term.”

Transforming a shopping space into a theme park and other entertainment options is the brainchild of Shinsegae Department Store Vice Chairman Chung Yong-jin.

At the groundbreaking ceremony in October for Union Square in Hanam, Gyeonggi, the 46-year-old Chung stressed that competition among retailers will come down to theme parks and baseball as incomes rise and more families go on outings together. 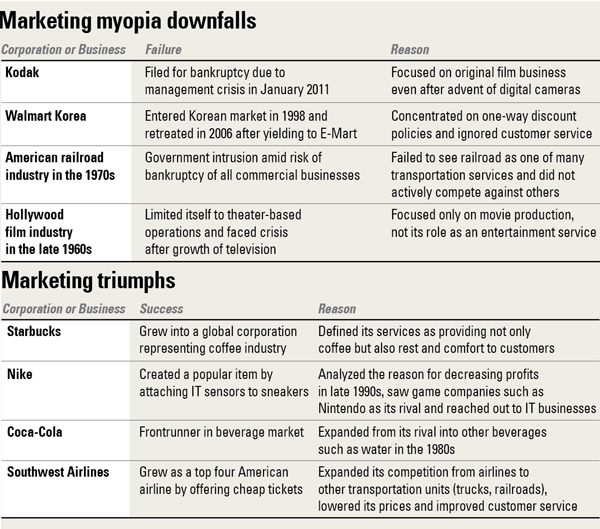 “Department stores have to focus on creating a living and cultural space where, along with shopping, entertainment and experiences are provided together,” he said.

Chung’s point was that department stores are no longer just competing among themselves, and to survive, stores must evolve by adopting selling points of other industries.

Shinsegae’s strategic change stems from former Harvard Professor Theodore Levitt’s warning to beware of “marketing myopia.” While at Harvard, Levitt published a paper in a 1975 edition of the Harvard Business Review on the vulnerability of companies with nearsighted outlooks. As an example, he presented the case of the American railroad industry, which boomed in the 19th century and first half of the 20th century, but then was bankrupt by the early 1970s.

Levitt wrote that the railroad industry was in crisis because it focused only on railroads. It failed to see its business as just one of many forms of transportation available to its customers. As a result, rail companies did not improve their services or lower prices and lost customers to planes and buses. Levitt pointed out that for businesses or corporations to maintain their success, they must continually find new customers.

Kodak, which filed for bankruptcy due to a management crisis in January 2011, is another example of failing to overcome market myopia. Established in 1889, Kodak was once the best in the field of cameras. But it crumbled when the company chose to concentrate only on film even after the advent of digital cameras. Even though one of its own researchers invented the digital camera in 1975, Kodak did not commercialize the invention. Instead, it lowered the price of its film cameras and profited by expanding their usage.

On the other hand, Fujifilm diversified its business to adapt to the age of digital cameras. The company decreased its film camera work force and used its experience with chemicals to jump into the cosmetics industry. While Kodak had tunnel vision, Fujifilm saw a new market to draw new customers.

Walmart, the world’s largest retail corporation, which launched in Korea in 1998, suffered a similar fate to Kodak. The company, ignoring Korean customers’ demands for diverse services, handed over its shares to E-Mart and withdrew in 2006. As a warehouse discount store, Walmart displayed its goods in tall stacks, but Korean customers could not reach them. The company also neglected its interior design, thinking that its cheap prices would woo customers.

In contrast, E-Mart made sure its shoppers could reach the store’s products and had brightly decorated interiors. “We packaged goods in small portions for convenience and differentiated from warehouse discount stores by letting customers touch the fresh goods,” said Lee Ju-Hee, managing director of E-Mart.

Some companies outperformed their competition by joining up with other industries.

Nike, the front-runner in sportswear, tripled its profits five years in a row between 1994 and ’99, but its growth rate decreased soon after. As teenagers became enthralled with gaming, they spent less of their allowance on sportswear. 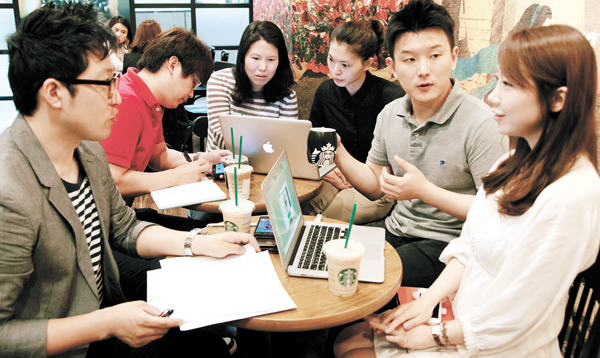 Office workers hold a meeting not in a conference room but in the relaxing environment of a Starbucks in Sogong-dong, downtown Seoul.Provided by the company

Nike saw Nintendo and other game makers as its competition, so it found IT companies to cooperate with and attached sensors to its sneakers. In 2012, Nike launched a wristband that counted calories burned and distance traveled, both displayed on an LED screen. The company has said its competitor is Apple, not Reebok or Adidas.

Meanwhile, Samsung introduced Coca-Cola’s example of innovation to its employees via the slogan “break the stereotype.” In the early 1980s, Coca-Cola dominated 35 percent of America’s beverage market, the best in its field. While workers took pride in their success, Chairman Robert Goizueta, appointed in 1981, asked, “How much Coca-Cola would a person drink out of all liquids in one day?” The most popular beverage maker’s water brand took up only 3 percent of the entire water market. Since then, Coca-Cola saw not just other beverages, but also water as its competitor.

In the coffee industry, Starbucks Korea’s creativity has gained attention. It started as a specialized coffee store but grew dramatically by emphasizing its role as not only a coffee shop but also a relaxing lounge. One analysis declared that “competitors of Starbucks are places that provide rest, including movie theaters and libraries.”

Recently, the company has started expanding its services by incorporating IT. At the end of last May, Starbucks Korea became the first franchise to use the “Siren order” service. It allows customers to easily select and pay for beverages via a mobile app. Starbucks is also expanding its domestic drive-through market.

“Our goal is to continually improve our services and seek innovation, not to compete against other coffee franchises,” said Lee Suk-gu, chairman of Starbucks Korea.