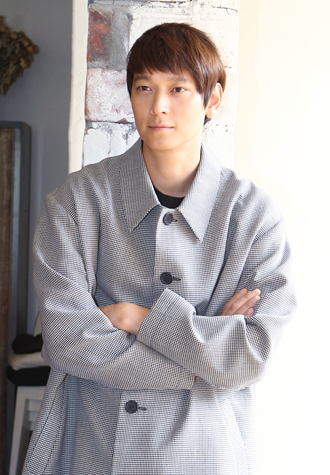 But the public hasn’t seen Kang in any role for four years because he’s been undergoing his mandatory military service and taking some time off.

However, Kang has now returned in a new costume film, “Kundo: Age of the Rampant,” where he plays Jo-yoon, a tenacious governor from the Jeolla area during the Joseon Dynasty (1392-1910).

The 32-year-old actor sat down with Ilgan Sports, an affiliate of Korea JoongAng Daily, to talk about his latest role.

Q. Why did you pick “Kundo” as your first film after finishing military service?

A. I was strongly convinced by director Yoon Jong-bin. I’m drawn to people who have strong confidence and precise intentions about their work, just like Yoon. As a matter of fact, many people tried to stop me from appearing in the film because Jo-yoon’s role is not big, and they thought I couldn’t shine among maverick actors like Ha Jung-woo and Jo Jin-woong. But I was pretty confident about my role and myself.

What were some of your priorities when playing Jo-yoon?

I wanted to show Jo-yoon’s bitter side. As he is a child of a concubine, he fails to be acknowledged by his father. He is constantly deprived of love, and although he is a villain in the film, he should be a character who evokes sympathy as well.

I wasn’t just trying to show his bad side, but his bitterness as well.

How did you feel when you finished shooting the film?

Personally, I wanted to live a little longer as Jo-yoon. When I felt that I had finally grasped the character, I was already over halfway into the shooting schedule. I don’t know if it was because I returned to shooting after such a long time, but it was kind of hard returning to my ordinary life.

How do you feel when you play a villain?

I feel something like a thrill when I play the bad guy. Due to my quiet personality, I don’t express my feelings that much. And I even feel stressed out when I have to reject something. So through my role I kind of feel pleasure when bullying someone. [Laughs]

Did you go through any special training for the film’s action scenes?

I trained with a personal trainer for five months before I began shooting. When I did action in “The Duelist,” I took modern dance lessons because I needed to show more choreographed movements rather than brutal ones. But this time, I underwent so much harsh training that the actual shooting didn’t even feel that hard.

Are you intentionally holding on to your mysterious image?

I think the image derives from my personality. When I don’t have special plans, I don’t like to hang around.

Are you really a kind of “tough guy” like your peer Ha described you?

I don’t tend to compromise. For example, I don’t care about my body getting hurt, I just carry on in hard action scenes.