North is already playing its games

North is already playing its games 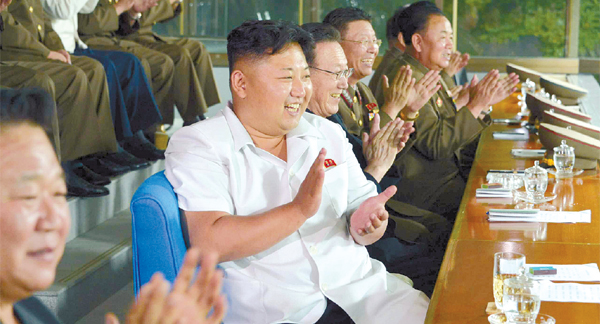 North Korean leader Kim Jong-un likes what he sees as he watches a practice match by the national football team that will participate in the upcoming Incheon Asian Games. Provided by Rodong Sinmun

Pyongyang continued its flippant attitude toward the Incheon Asian Games as it confirmed yesterday that the North Korean Olympic Committee plans to send athletes to the upcoming competition in South Korea, which it called a symbol of dialogue and reconciliation between the two Koreas.

Despite Pyongyang threatening to boycott the competition, Kim emphasized his high expectations for the Asian Games as he watched a practice match of the national men’s football team that will participate in the Asian Games, the state-run Rodong Sinmun also reported.

After the national team won, 12-0, Kim told the players, “You have trained well in order to participate in the 17th Asian Games.”

He further said athletes “need to actively contribute to reconciliation, dialogue and the promotion of friendship and peace with many international countries.”

Kim was accompanied by other key officials such as Hwang Pyong-so, director of the General Political Bureau of the North Korean army; Choe Ryong-hae, former director of the General Political Bureau and secretary of the Workers’ Party’s Central Committee; and Kim Yang-gon, a governing party secretary who was a close aide to Kim’s condemned uncle, Jang Song-thaek.

Such remarks come after North Korea on Friday threatened to boycott the Asian Games a day after talks on participation broke down.

Pyongyang said it would reconsider taking part in the Games, blaming South Korea for being uncooperative in the working-level talks that ended without a date for another session.

The two sides disagreed on who would shoulder the cost of bringing North Korea’s proposed 700-member delegation of 350 athletes and 350 cheerleaders.

But the KCNA reported yesterday, “The Olympic Committee of the Democratic People’s Republic of Korea has decided to send our athletic delegation to the 17th Asian Games taking place in South Korea’s Incheon from Sept. 19 to Oct. 4.”

Pyongyang’s message is being perceived as yet another means of pressuring Seoul to finance the North Korean delegation and an indication of Kim’s instability.

Kim also was quoted by the KCNA as saying, “Sports are sacred and should not become a political bargaining chip of the detractors.”

For North Korea, it is important to push for a large delegation - especially their cheerleaders, comprised of pretty young women - to promote a more humane, personable image to the world. Its cheerleading squad has caught the eye of the international community at the 2002 Busan Asian Games and the 2003 Summer Universiade. Kim’s wife and first lady, Ri Sol-ju, was one of 101 cheerleaders at the 2005 Asian Athletics Championships in Incheon.

North Korea agreed to send its sports delegation to the Incheon Games despite continuing military tension in the region, including a series of short-range missile launches.

On Thursday in New York, members of the UN Security Council condemned recent ballistic missile launches by North Korea, saying the three rounds of Scud short-range missiles fired in June and July toward the East Sea were in violation of Security Council resolutions.

In response on Saturday, North Korea through the KCNA denounced the UN Security Council statement, saying the council “must make an issue of aggressive, threatening and provocative joint military drills” by the United States and South Korea. It added that the launches of strategic rockets “are solely an exercise of our right to self-defense against the United States’ nuclear threats and schemes of aggression.”