Redevelopment of a Gangnam slum languishes

Redevelopment of a Gangnam slum languishes 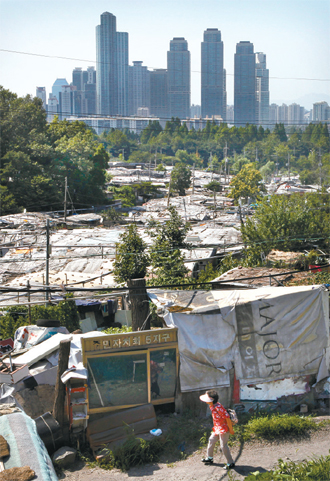 The fate of Guryong Village, a dilapidated shantytown in Gangnam District, hangs in the balance as the Seoul Metropolitan Government and the district office clash over how it should be redeveloped. By Park Sang-moon

Scattered in the wooded hills not far from Gangnam’s glitzy skyscrapers and expensive residential complexes is a makeshift community made up of about 2,000 shacks and trailers.

The town itself is essentially a cluster of converted sheds and garages made out of plywood and tarps, and it is so dangerously cramped that in 2012, a fire that broke out in a house here engulfed 21 households in just 35 minutes.

But the scourge of these rickety and unhygienic residences, known as Guryong Village, only looks set to grow, as the village has become a political battleground between Seoul city government and Gangnam District Office.

Seoul Mayor Park Won-soon and Shin Yeon-hee, the head of the district office, are sharply at odds over how to refurbish Guryong and compensate the landlords.

The tension between the two has continued for more than two years and has now reached a peak: If an agreement is not reached by Aug. 3, redevelopment plans will be canceled.

But the two sides have so far refused to budge, making the situation more intense.

But while the battle rages on, residents have gone about their lives under a veil of poverty, with the fate of their village hanging in the balance.

On a sizzling hot afternoon on July 11, four women, mostly in their 60s and 70s, sprawled out on a low wooden bench.

They said that it’s almost torturous to stay in their houses in the scorching heat.

“We simply can’t stay in our house on a day like this,” said a 67-year-old woman who only gave her family name, Song. “It’s better to go out and stay here.”

The origin of the shantytown dates back to the late 1980s and symbolizes Korea’s rapid modernization from a war-ravaged country into an economic powerhouse.

Ahead of the 1988 Summer Olympic Games, the South Korean government forced those who lived in illegal encampments out of their towns in a desperate effort to stave off the image of a war-ravaged, poor nation - a prevalent image at the time.

Only 40 years ago, the affluent Gangnam District was little more than rice paddies. And prior to the 1970s, Gangnam was one of the least developed districts in Seoul, making it home to a number of shantytowns. 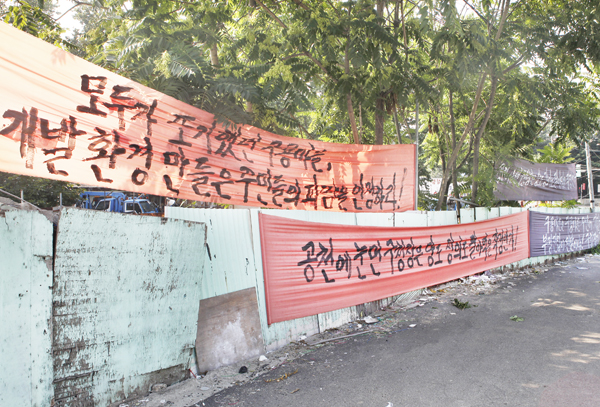 Banners condemning the political wrangling over a redevelopment plan are displayed near the office of the Guryong Village Residents Association. By Park Sang-moon

The government was especially concerned about the dilapidated residences near Gangnam because they were so close to Jamsil Olympic Stadium in Songpa District.

As development in Seoul increased, and more modern landmarks popped up - such as the Trade Tower, built in 1988 - shantytown residents found it more difficult to locate alternative living spaces. These people flocked to the periphery of Gangnam District, just at the foot of Mt. Guryong. Now, more than 20 years after the Olympics Games, the district has transformed itself into one of the most trendy and wealthy downtown areas in the country and has became a symbol of Korea’s successful transition into modernization.

However, the 286,929-square-meter village (about 70 acres) remains in worse condition than even some remote rural areas.

When asked about the stalled redevelopment plan, residents were particularly broody.

“We are really sick and tired of the dispute,” Song said. “Now we’re not sure whether the plan is really for us. It seems that officials cling to the issue for their own political gain.”

Residents said that even they are divided over the direction of the refurbishment, though the Guryong Village Residents Association, an official group representing the villagers, supports the proposal by the Seoul Metropolitan Government.

The district office is entitled to come up with the specifics of the development plan, while the city government has the right to pass the proposal.

But after Park Won-soon was sworn in as Seoul mayor in 2011, the city changed its position and suggested a revised development plan.

The city originally planned to let municipal governments or public corporations purchase the Guryong land from landowners and enter redevelopment. Under the new plan, however, landowners will be given the rights to a part of their property while receiving smaller financial rewards than in the earlier proposal.

Mayor Park stressed that the revised plan will be less costly for the debt-ridden municipal government, because public corporations and the city government are bound to pay less to landlords.

“Our goal here is clear. We want to spend as little money as possible at a time when Seoul still carries a large amount of debt,” he said last month. “If we follow the district office’s idea, it will cost hundreds of billions of won more.”

The city government has estimated that 80 billion won ($77 million) can be saved with Park’s plan. A total of 630 billion won is needed to carry out redevelopment under the earlier proposal, according to the city.

“Soon I think I am going to have a meeting with the district chief,” said Mayor Park. “She will come there. It may sound too optimistic, but I believe that we can work out things once we sit down.”

But Shin, the head of the district office, lashed back at the mayor, saying that the revised proposal will likely benefit only certain landlords.

“Seoul city’s plan completely goes against principle,” Shin said earlier this month. “A few landowners will take advantage of the mixed compensation plan. And it will raise land speculation and have other detrimental effects.”

The city government last month said that it could limit the number of buildings a person can own in order to stave off concerns associated with property speculation.

“Under the plan, one landowner will be allowed to have one property, and the size of the land should be less than 660 square meters,” the city government said in a statement.

The Seoul city government offered to discuss the matter with Gangnam District, but the district chief denied the request, saying no further talks would take place unless the city government changes its position.

Korea’s Board of Audit and Inspection has since ordered the two agencies to reconcile their positions for the interests of both sides.

“We would just like to see progress,” said a representative of the Guryong Village Residents Association. “We feel that officials from different political affiliations are only raising their political standing.”