World is a stage for one defector

World is a stage for one defector 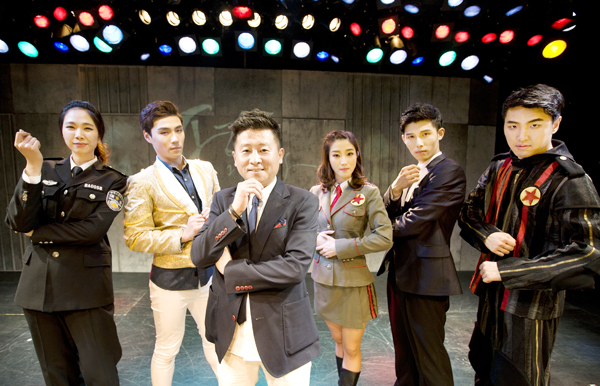 Jung Sung-san, center, the defector turned director best known for “Yoduk Story,” poses at the Uniplex Theater in Seoul with the actors and actresses of his new musical “Pyongyang Maria,” which depicts the tale of a North Korean woman forced to work as a prostitute in China. By Park Sang-moon

“Pyongyang Maria,” a new musical written and directed by Jung Sung-san, tells a tale of a North Korean woman forced to work as a prostitute in China.

Its scenes are set in North Korea’s black markets, a notorious prison camp and a red-light district in a Chinese city.

Jung, a defector from North Korea himself, faced a major challenge in mounting such a sprawling story on what he knew would be a modest production budget and would be staged in relatively small theaters, some only large enough to fit 200 people. So he gathered a cast of some 50 actors at a movie lot in Iksan, South Chungcheong, and put many of the scenes on film. When the play is mounted in a theater, a scrim is installed on stage and the filmed scenes are projected onto it.

Only five actors actually act on stage. They speak and even sing with the characters in the filmed sequences. The effect is seamless.

“This musical is basically a combination of a film and a theater play,” says Jung, 45, who is best known for his award-winning musical “Yoduk Story,” which debuted in Seoul in 2006. The Korean production was even mounted at the Music Center at Strathmore in Bethesda, Maryland, and at two Korean churches in New York in the same year.

“I wanted to deal with the gloomy, harrowing story of a North Korean call girl in China in a very trendy way, using some cutting-edge digital technology,” he says. “I want to be recognized not just for handling North Korean themes, but also for state-of-the-art technical work and the artistic quality of the musical.”

To date, Jung is the most successful North Korean defector in the South’s performing arts circles.

“Yoduk Story” was described by foreign critics as the “Les Miserables” of North Korea, and more than 350,000 people went to see it in theaters, he says.

“I’m now totally back to the situation when I first started ‘Yoduk Story,’” he says. “Just like at that time, I’m now staking my whole life on ‘Pyongyang Maria.’”

Jung came from an elite family in North Korea. He studied filmmaking at Pyongyang University of Dramatic and Cinema Arts.

But in his senior year in 1994, Jung was dispatched to a frontline unit as part of an emergency military service after the death of North Korean founder Kim Il Sung. While serving as a guard in the unit, he enjoyed listening to South Korean radio programs coming across the border.

But then he got caught.

“I was arrested one night and dragged to a detention camp,” he says. “Do you know what the real problem is in North Korean prisons? The real problem is that the camps can never make prisoners regret their transgressions - because they are beaten too much!”

As Jung was being transported from his detention camp to an undisclosed location - probably one of North Korea’s notorious political prisons - misfortune turned to blind luck.

“On the way to the prison camp, the truck carrying me and other prisoners suddenly turned over,” he says. “So I escaped and I got out of the country afterwards.”

In South Korea, he graduated from Dongguk University’s College of Arts, majoring in theater and film studies. He became a professional comedy show writer in 1997 after winning a KBS competition. In 1998, he started to work in filmmaking with popular Korean director Lim Kwon-taek. He worked with many South Korean directors on some popular movies about North Korea, such as “J.S.A.: Joint Security Area,” a thriller movie that was a hit in 2000.

If “Pyongyang Maria” sounds like a recycled “Madama Butterfly” or “Miss Saigon,” think again. In fact, it’s a story entirely rooted in real life - and death.

In 2007, after “Yoduk Story” was proclaimed a hit, Jung received a letter from China. It was from a North Korean woman who introduced herself as Kim Yong-suk, her Korean name, and Jong Ri-hwa, her Chinese alias.

Kim proposed Jung write a play about the brutal life of a North Korean woman making a living in China - her life.

Kim said she was born in Pyongyang and worked as a math teacher at a local elementary school. But she, her husband and their twins were expelled from the capital because she was caught listening to South Korean songs on the radio. They were sent to the remote Sinuiju region. After the children died of hunger, Kim slipped into China to make a living and to send money back to her husband. She worked as a call girl. She made quite a lot of money and became a mistress of a senior Chinese government official, she said in letters to Jung. But she was repatriated to the North and joined an underground Christian group.

She was so eager to have her story put on stage she even sent Jung money: about 50,0000 yuan ($8,060). Considering the average monthly wage of a Chinese worker at the time was about 600 yuan, it was a huge investment.

“After ‘Yoduk Story’ became a success, I thought I had a duty as a defector turned director to reveal the brutal life of North Koreans through the arts,” Jung says. “I felt this responsibility strongly after hearing from the North Korean woman.”

In 2009, Jung wrote Kim to say he had finished writing the first draft of what was to become “Pyongyang Maria.”

“But there was no reply,” he recalls. “A defector later told me that she was executed after being arrested for being a Christian.”

Jung said he invested a total of 500 million won ($485,500) into the musical, which opened last year on April 15 at Uniplex Theater in Daehak-ro, northeastern Seoul.

Jung said he was initially confident of the play having a profitable run thanks to his track record, his networking and marketing strategy.

“Living in South Korea for more than a decade, I have learned how to satisfy the South Korean public’s appetite,” he says. “I was sure I could succeed this time, as I prepared for this musical for the past seven years. Critics were positive as well.

“I believed a high-quality work with sincerity of the director could survive,” he says. “Here, in the Daehak-ro entertainment district, there is no play about North Korea among about 230 performances per day. In this Holy Land of South Korean culture, I want to compete with other theater plays and musicals.”

However, just a day after the musical debuted on April 15, the Sewol ferry sunk and the whole nation went into mourning.

“A chairman of a South Korean conglomerate promised me to take tickets worth about 200 million won,” he says. “But due to the Sewol accident, most of my investors turned their backs on me.”

Across Korea, stores, shopping malls and theaters saw a falling off of business after the Sewol tragedy as people stayed home. Even economic growth for the quarter was affected.

North Korean defector friends and South Korean companies such as Posco bought tickets to help Jung out, but he says the play is still struggling.

Although it was ultimately successful, “Yoduk Story” also had a difficult birth.

Jung’s financial backers felt political pressure and backed out before its premier. Jung was forced to raise money all over again - and even put up one of his kidneys as collateral for an advance of $20,000 from a loan shark.

Jung plans to continue his work as a director, on stage and possibly for films.

“Possibly, this musical will be my last about North Korea,” he says. “But I will continue to make movies about the North, and this autumn I will release a new movie about North Korean gangsters.”

And if this defector succeeds in South Korea, maybe there are higher mountains to climb.

“I will never stop working as a movie or theater director,” he says. “Someday, I want to release a movie or a play in Hollywood.”