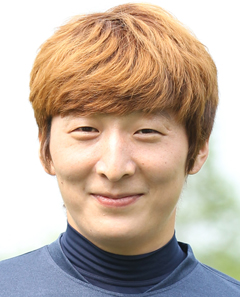 Football star Park Eun-seon, a striker of FC Seoul Amazones who endured demands by Women’s K-League coaches that she undergo a sex test, is leaving the country with a broken heart.

Officials at the club, which is owned by the Seoul Metropolitan Government, confirmed on Sunday in a phone interview with Ilgan Sports, an affiliate of the Korea JoongAng Daily, that the 27-year-old is going to Russia to join FC Rossiyanka.

Normally when a player goes to a European league, fans and people in the football community congratulate the athlete, like when Ji So-yun joined the Chelsea Ladies of England. But the atmosphere surrounding Park’s departure is totally different, since Park seems to be leaving the WK-League because she is disgusted by the way the organization has treated her.

Questions over her gender were first raised when China said it would ask the 2010 Asian Cup’s organizing committee to conduct a test to determine Park’s gender if Korea brought her to the event. Korea then dropped Park from the team.

In November, six of the seven coaches in the WK-League demanded that the league conduct a sex test on Park, who is 180 centimeters tall (5-foot-9) and weighs 74 kilograms (163 pounds). Park has previously participated in the 2004 Athens Olympics.

“Neither the KFA nor the women’s football federation made a clear explanation about her,” the six coaches said at the time. “Park is one of the best players in the league, but the KFA hasn’t included Park on the national team for some reason. We judge that there is a problem with Park playing in the league.”

However, the coaches faced a major backlash. Fans and analysts accused them of trying to disqualify the league’s best striker so they could win more games. Park was the league’s leading scorer last season with 19 goals, leading her team to a second-place finish. Football analysts noted that the coaches had not complained about Park until last season.

“The league is in the middle of the season, but since Park really wanted to leave, we had to let her go,” said an official of FC Seoul Amazones. “All of the terms of agreement among Park, the Russian club and us are finalized and are waiting for the Seoul Mayor [Park Won-soon] to approve the deal.”

Details of the contract with the Russian club were not revealed, but sources said that she will receive about 100 million won ($97,000) per year, double her current salary. By comparison, Ji of the Chelsea Ladies receives less than 50 million won per year.

Sources said the huge investment in Park was made because FC Rossiyanka wants to redevelop a strong squad. The club was established in 1990 and won the league four times in 2005, 2006, 2010 and 2012.

Park has consistently participated in team training but fell into a slump recently after the Korea Football Association (KFA) failed to properly punish the coaches who demanded that she undergo a sex test.

In February, the National Human Rights Commission advised the KFA to punish the coaches, saying that demanding Park to take a gender test constituted a serious human rights violation. But neither the KFA nor the WK-League moved forward with any form of punishment.

“When the league asked the KFA to make a decision about the punishment, they told us to submit a draft regarding it,” a source said on the condition of anonymity. “They are shifting responsibility back and forth since they know that the Human Rights Commission’s advice doesn’t carry legal binding force and it eventually broke Park’s heart.”