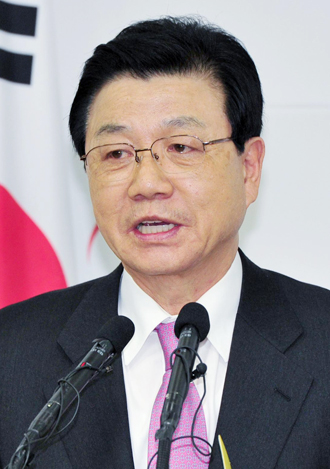 Kim Jin-sun, president of the 2018 Pyeongchang Winter Olympics Organizing Committee, has resigned from the post, but neither he nor the committee offered a detailed reason.

In a meeting yesterday morning with organizing committee officials, Kim read a short statement, part of which read: “The 2018 Pyeongchang Games are at a turning point for the latter half of its Games preparations, which require more detailed planning and execution. At this critical juncture, I believe [the committee] needs new leadership and a stronger system that will effectively carry out Games-related projects. This is why I decided to resign as president of the organizing committee.”

Kim became the committee head in November 2011 after he helped win the International Olympic Committee’s nomination for the 2018 Games for Pyeongchang. That was his third stint as special envoy to promote the Korean city’s bid. As Gangwon provincial governor, he also oversaw preparations for the Winter Asian Games in 1999.

There have been rumors since last week that Kim might resign, especially after he didn’t participate in the groundbreaking ceremony for Gangneung Sports Complex in Gangwon on Thursday. In June, the organizing committee was audited by the Board of Audit and Inspection because of suspected financial problems. A source in the government said on condition of anonymity that the audit was based on Kim’s mismanagement of the committee’s finances.

The source said the committee needed to earn at least 80 billion won to 90 billion won ($77 million to $87 million) for its operations over the past three years, and set up several projects, including the sale of sponsorships, but failed to obtain the necessary funds and then borrowed a large sum from banks.

“This was a serious problem for the committee with only three years left until the event,” the source said.

After the audit, Moon Dong-hu, vice president of the committee and Kim’s chief aide, resigned from his post, saying he had health problems.

The question of Kim’s successor is still unresolved. Rumors that Cho Yang-ho, chairman of Hanjin Group, would be the new chief were denied in a press release yesterday. Cho said, “It would be an honor for me to lead a group that is preparing an international event, but I’m not able to take that role. But I will try to help the committee whenever necessary.” Cho was the chief of the Pyeongchang Bidding Committee.