Korea, U.S. linkages in art are highlights of envoy’s residence

Korea, U.S. linkages in art are highlights of envoy’s residence 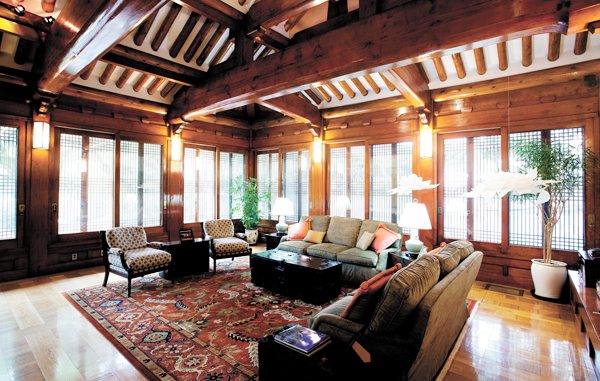 The reception hall of the Habib House, the official residence of the U.S. ambassador. The hall is decorated with Korean artist Lee Sung-mi’s “Flower 4 U” series hanging on the wall. By Jeon Ho-sung

In the quiet neighborhood behind Deoksu Palace in Jeong-dong, central Seoul, Habib House, the residence of the U.S. ambassador to Korea, stands serenely behind a stone wall and landscaped grounds next to the original American diplomatic mission in Korea.

Every U.S. embassy and consulate around the world participates in a cultural diplomacy program called Art in Embassies. Envoys are encouraged to decorate their personal or official spaces with art pieces either from their home or host countries. The program intends to communicate cultural differences through each country’s art.

At the moment, Habib House is adorned with 19 artworks by 12 Korean or Korean-American artists, under the main theme of “Context Revisited.” When U.S. Ambassador Sung Y. Kim finishes his term in August and returns to America, the art pieces will also go back to their original owners and the Art in Embassies program will be renewed under the new ambassador.

In order to get one last look at the current display, the JoongAng Sunday Reporter and Lee Ji-yoon from the National Museum of Modern and Contemporary Art’s Seoul branch visited Habib House on a sunny day in June to meet Chung Jae-eun, the wife of the U.S. Ambassador. 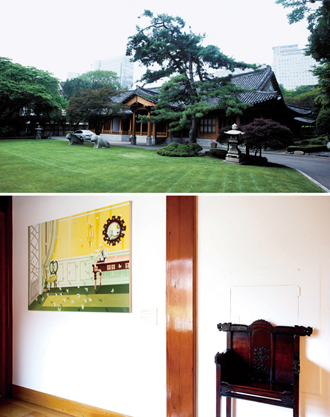 Above: The front view of the Habib House. Its exterior boasts the elegance of a hanok, the traditional Korean residence. Below: Artist Nam Kyung-mi’s “Between the Mirror and the Canvas Frame” By Jeon Ho-sung

Behind the massive gates of Habib House stands the American Legation building, which dates from 1884. No longer in use as office space, it is now overshadowed by the much newer official U.S. ambassador’s residence here. The legation building is designated as Seoul’s Tangible Cultural Asset No. 132.

The residence is a two-story hanok, or traditional Korean-style house - but now with an American flag flying in front. It is said to be the only one of the nearly 200 U.S. diplomatic mission residences that echoes the host country’s traditional housing style.

Inside the hanok, however, the space seems more western in style, but with a traditionally accurate arrangement of girders and rafters in the building’s high ceiling.

“They built the space with fir logs that grew in the states of Oregon and Tennessee,” Chung said. “However, the building is constructed in Korea’s traditional way where every timber exactly fits with another without using nails.”

The central reception hall is designed with bilateral symmetry, featuring a brick stove situated in the middle. Some of the rooms are entertaining areas, and others are the quarters for the ambassadorial family.

In the middle of the house there is a courtyard that was modeled after Gyeongju’s Poseokjeong Pavilion.

From left to right: The installation artist Kang Ik-joong’s public project “Happy World” (2008). One of the pieces in the “Black Gravity” (2011) series by the Korean sculptor Sim Seung-wook. Lim Hyun-kyung’s “The Garden of Mind” (2010).

Paintings, engravings and sculptures that are part of the Art in Embassies program adorn the public spaces of the residence. They include famous Korean photographer Koo Bohnchang’s photography and the installation artist Kang Ik-joong’s large-scale artwork.

There are also works by rising young artists such as Lim Hyun-kyung, a 31-year-old painter who employs Korea’s traditional materials and themes in her work and also by 41-year-old media artist Chun Min-jung.

In the center of the ceiling, above the dining table is a chandelier-like installation art piece titled “Transplanted Ornament,” made by the 43-year-old Korean-American artist Jean Shin and the New York-based architect Brian Ripel. The art piece uses iron elements from window frameworks, gates and fences.

“I remember that I had a hard time trying to get the heavy artwork inside the house without damaging the pillars of the hanok,” recalled Chung.