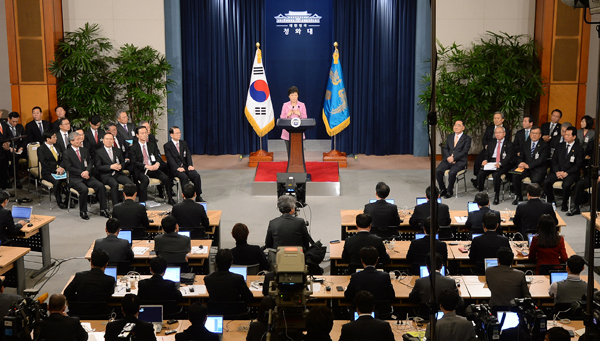 At her first press conference on January 6 since her inauguration in February 2012, President Park Geun-hye said that unification will be a bonanza for the Korean Peninsula. [Joint Press Corps]

Several weeks ago, the Financial Times had an article about two new unification equity funds created in Korea. These are investment products where the asset managers target about 15 percent of the fund on companies and sectors that might do well in a unification scenario - such as construction, utilities, farming, agriculture and medical sectors.

This might seem like a boutique-type investment. Indeed, it seemed like a boutique story for the FT, except that these funds were actually performing well. They were showing an investment return of nearly 7 percent in the last quarter, compared with an of 3.5 percent. Moreover, over $35 million in Korean capital flowed into these funds in the few months since they have been started.

Unification - a perennial topic of discussion among political scientists - has now become an interest of investors. Undeniably this phenomenon is a reflection or outgrowth of the Park Geun-hye government’s labeling of “unification bonanza” or grand opportunity or jackpot in her famous speech in Dresden, Germany. The launch of the preparatory committee for unification this week is a very significant step after the Dresden speech.

The concept or “theory” of unification has taken many forms in Korea.

I count five. Each one is distinct, and has been motivated by a combination of ideology and real-world events. They are all important to remember. Without one, the others could have never emerged.

The first theory of unification emerged after the division of Korea and throughout the Cold War. This was essentially the notion of “unification by force” (p’ukch’in t’ongil), or the idea that the only legitimate definition of unification was the crushing victory of one Korea over the other. It was the ultimate zero-sum game. This “winner take all” view was held by Syngman Rhee, Park Chung Hee and Kim Il Sung. P’ukch’in t’ongil meant non-dialogue between the two Koreas, but it also shaped ROK domestic politics in that one could not make any conciliatory statements about North Korea, lest you be in violation of the National Security Law.

But then the Cold War ended and the two Germanys were unified. Koreans watched this with deep envy, but the realities of how difficult unification started to set in. As cathartic as unification might seem, it also was prohibitively expensive. The Unification Ministry, think tanks like KDI and KINU, and private sector institutions like Goldman Sachs all calculated the cost of unification, and the numbers were large and frightening to most South Koreans.

This gave rise to the second theory of unification - that it was too difficult and too dangerous. Unification became something that was not desired, but something to be avoided because of its staggering costs and the terrible uncertainties. It was during this period that the term “hard” and “soft” landing emerged. Korea wanted to avoid a hard landing. This second “hard landing” theory of unification predominated Korean thinking from the end of the cold war in Europe until the Asian financial crisis in 1997.

In 1997 Kim Dae-jung put forward the idea of the sunshine policy. A strategy of unconditional engagement designed to open the North to the forces of reform. This was a policy tied to DJ’s more liberal political ideology, and then carried forth by his successor Roh Moo-hyun for an entire decade. But it was not just about ideology. This third theory of was motivated by hard economic realities. Korea’s liquidity crisis in 1997-98 made unification impossible, so it was best to engage the North Korean regime over the long-term, and pave the way for a gradual transition or “soft landing.” What was so distinct in retrospect about the Sunshine Policy was the notion that unification should be pushed generations into the distant future. It socialized an entire generation of Koreans and the world into seeing unification as a “bad thing” - too expensive, too impractical and too inconvenient - and so it should not be a concern or goal of the current generation or even its children or grandchildren.

The Sunshine era ended with the re-election of conservative Lee Myung-bak. Lee was a businessman, not an ideologue. He was pragmatic and saw unification in pragmatic terms. What emerged during this period was a pushing back against a decade of views on unification. This fourth theory was a pragmatic one - that is, unification may be expensive, it may be difficult and it may be dangerous. But Koreans cannot be ostriches and stick their heads in the sand hoping it will go away. Instead, as traumatic as unification may be, it could very well come tomorrow or next month or next year. Koreans must start to prepare now for it, not simply wish it would go away forever. Some critics said unification was too overwhelming to prepare for, and that it would require good luck. But Lee’s response was that you cannot be lucky if you are not prepared. The prepared get lucky and the unprepared do not.

And so this takes us to President Park. In her Dresden speech, she laid out her own theory of unification as a bonanza or jackpot for Korea and her neighbors. It could offer opportunities for growth, investment, and peace in addition to the joy of uniting the two Koreas. This fifth theory of unification does not see it as winner take all (pukchin), or something to be feared and delayed indefinitely (sunshine), or even something that we must reluctantly prepare for. In a sense, it is an attempt at social re-engineering of the discourse on unification over the past 15 years as being something dark and negative. Rather she paints it as something bright - in fact if you look at some of the pamphlets out of the Blue House on the policy, it makes unification look like the pot of gold at the end of the rainbow or on the other side of the mountain.

There are two policy implications from this brief history. First, the turn to thinking about unification in the near-term rather than in the long-term is related to ideology - it is related to politics - but it is also motivated by a sober realization that the stability of the regime in the North is far from certain. Time is running out on the North Korean regime absent any serious reform. And there is very little evidence that the current leader has any intention to reform. One gets the sense talking to policy makers in the region these days that there is more and more concern about the viability of the regime.

Second, there is a direct correlation between the increased interest in unification and South Korea’s outreach to China. Park’s successful second summit with Xi Jinping has deepened the strategic relationship. Contrary to most, I think that this deepening of ties is not a reaction by Seoul to its deteriorating relations with Japan. Instead, it is because South Koreans see a moment of weakness in China’s ties to North Korea. Xi is not Hu or Jiang. Dai Bingguo, the biggest apologist for North Korea inside of China, is no longer in the game. China is increasingly worried that the regime in Pyongyang under Kim is headed in a spiraling downward direction.

South Korea is trying to take advantage of this window and bring China more to its side. It wants to create greater Chinese equities in its relations with Seoul than its relations with Pyongyang. Does this mean that Seoul will be willing to cut a deal with China on North Korea that excludes the United States? No, I don’t think so. First, China is not ready to abandon North Korea. And second, as infatuated as the South Korea may be with China, its outreach to Beijing is only credible if it is grounded in a strong alliance with the United States. To put it simply, without the U.S. alliance, South Korea gets treated by China like a small province. I think leaders in this government all understand that.

*The writer is professor of government at Georgetown University and senior adviser and holds the Korea Chair at the Center for Strategic and International Studies (CSIS) in Washington, D.C.