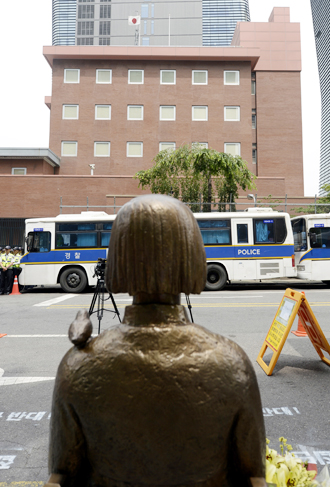 I visited Japan for three days last week with nine colleagues from the media community. We met with Prime Minister Shinzo Abe and with former prime ministers Yasuhiro Nakasone, Taro Aso and Yoshihiko Noda. During our trip, we had discussions, each lasting two to three hours, with lawmakers from the ruling and opposition parties, media executives and university professors. It was a tight schedule. While the Japanese asked that the meetings be “off the record,” they still asked us to send their voices to Korea. It was a contradictory request, and it is regrettable that I can only discuss their key remarks anonymously. Here are some of them:

The vision of Korean and Japanese politicians has shrunk. They should have thought about the destiny not only of their own country, but also that of their neighbors, Asia and the world. Japan’s politicians must stay the course and remember that Japan must deeply repent its history. The problems of our time must be resolved by the contemporary generation. Korea is the country that Japan values the most in Asia. It is important for the leaders of the two countries to meet and embrace each other. Former Prime Minister Nakasone visited Seoul for a summit meeting before he visited the United States.

It is shocking that a boutique specializing in anti-Korean themes opened in Sanseido, the largest bookseller in Jimbocho, Tokyo’s literary neighborhood. But commercialism is the key for Japan’s anti-Korea sentiment. While anti-Korean sentiment produced anti-Korean news articles, weekly magazines, broadcasters and Internet media fueled that sentiment for audience ratings and viewers’ clicks. Clear-headed management is needed for the journalistic practices of both countries. “We report by not reporting” is something we must remember.

There were criticisms in Japan that Tomiichi Murayama and Yohei Kono were traitors. There is still a considerable number of politicians in Japan who are putting their efforts into improving Korea-Japan relations despite such critical attacks. Koreans must understand that the Japanese people’s feeling that “Korea has already become our rival” is underneath the anti-Korean sentiment in Japan.

Accuracy, balance and consistency are important in reporting about Korea-Japan relations. Direction should also be focused on the future, rather than stirring up disputes by concentrating on the past. Instead of criticizing each other, the time has come for us to support the positive.

Based on my experience, Korea-Japan relations must start from “Not doing what must never be done.” Political leaders of the two countries, however, repeatedly do what is destined to worsen the situation. Paying respect at the Yasukuni shrine and touching on the Dokdo issue are such acts. Since the two countries normalized their relations, they fought over the issues for 49 years, but they have not found resolutions for those problems.

Right now, the issue associated with “comfort women” for the Japanese military is the biggest obstacle to better relations. An increasing number of Japanese have proposed calling the women “sexual slaves” rather than “comfort women” to acknowledge the severity of the issue. Instead of running on parallel lines, the two countries’ leaders must meet and find a way to resolve this issue.

Many in Korea complain that Japan’s rightward shift was the start of this phase of troubled relations, but that’s not accurate. Korea-Japan relations started to worsen when the Democratic Party of Japan was in power. What happened during the Kyoto summit in November 2011 was actually different from what was reported in Korea. And then bilateral relations became incredibly bad after then-President Lee Myung-bak visited the Dokdo islets in August 2012 and demanded an apology from the Japanese emperor. There are some people who try to improve China-Japan relations, but it seems we hear only from the people who want to prompt trouble between Korea and Japan.

It is impossible for the two countries to share a perfect understanding. We need constant management of Korea-Japan relations. Instead of magnifying conflicts by obsessing over each other’s wrongdoings, the two countries must recognize their differences.

Korea and Japan are the only two countries in East Asia that share the principles of free markets, democracy, basic human rights and rule of law. Although they have problems, they can be resolved by exchanging honest opinions and having a future-oriented attitude.

Footnote: Prime Minister Abe opened up his heart on some key issues, but the remarks were asked to be “off the record,” and it is regretful that I cannot discuss them. Because the power shortage in Japan continues due to the tsunami-damaged Fukushima Daiichi nuclear plants, temperatures inside offices in Japan were hot. The easygoing attitude of former leaders was memorable in that they went to the closets in restaurants to find their jackets instead of having someone else do so. It is also memorable that Japanese officials started our sessions with silent prayers for the victims of the Sewol ferry.