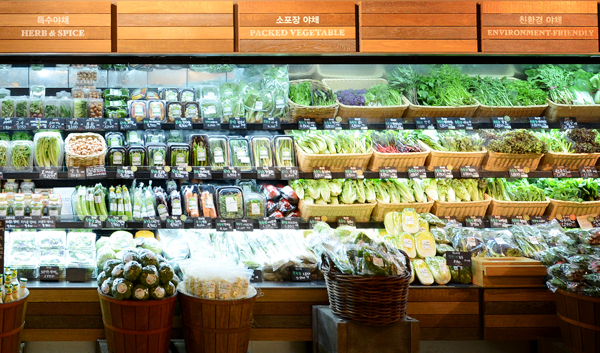 Weather conditions have caused the price of some vegetables in Korea to skyrocket. [JoongAng Ilbo]

In times of extreme heat and cold, the price of vegetables and fruits soars as supplies dwindle. The price fluctuation has a major effect on large discount stores and on the people who shop there, since the chains buy their products directly from farmers.

The price of produce has gone up in recent weeks as vegetable growers in rural areas have been struggling with their harvest due to the heat and lack of rain, causing concerns among discount store chains over the quality of their vegetables and fruits.

According to the Seoul Agro-Fisheries and Food Corporation, the average wholesale price of vegetables at Garak Market in Seoul surged between June 1 and July 17. For example, the price of an eight-kilogram (17-ound) box of broccoli went up 20 percent while a box of 50 cucumbers jumped 33 percent over the same period. The price of spinach went up 58 percent.

According to the Korea Meteorological Administration, the average temperature in Seoul from July 1 to 10 was 26.2 degrees Celsius (79.16 degrees Fahrenheit), which is up 2.2 degrees from the previous year’s average. The peak afternoon temperature is up an average of 3 degrees Celsius over the same period compared to last year.

Local discount stores have been devising new ways to keep their prices stable in times of extreme weather. Lotte Mart yesterday said that it will bring in vegetables from the Goraengji highlands this week, which is two weeks earlier than its usual schedule.

Vegetables from that part of Gangwon are not as easily affected by the heat as the average temperature there is 3 degrees lower than many other farming areas.

The retailer said that it is selling discounted Goraengji vegetables - for example, a cabbage will cost 1,600 won ($1.55), four cucumbers will cost 2,200 won and two broccoli heads will be 2,800 won.

“Based on our study, vegetable farmers in the Seoul and Gyeonggi regions have seen a fall in supply as their vegetables haven’t been able to endure this sultry heat,” the Lotte Mart official said.

While Lotte Mart has decided to introduce Goraengji vegetables earlier, its rival E-Mart has tried to solve the problem by expanding the types of vegetables and fruits that it stores in its controlled atmosphere (CA). This storage system involves reducing the level of oxygen in the air and increasing carbon dioxide, which extends the length of time that produce can remain fresh.

“Our unique CA storage system is effective especially in storing items that are more vulnerable to price fluctuations during high heat and monsoon season,” said an E-Mart official.