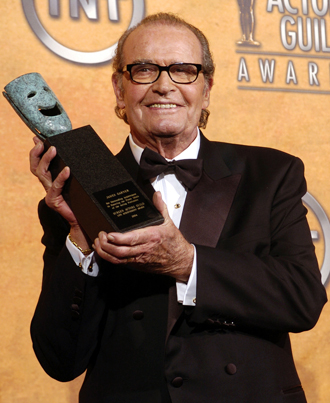 In February 2005, James Garner was given the 41st annual life achievement award at the 11th Screen Actors Guild Awards in Los Angeles. [AP/NEWSIS]

James Garner had a way of widening his eyes while the corner of his mouth sagged ever so slightly. Maybe he would swallow once to further make his point.

This portrait of fleeting disquiet could be understood, and identified with, by every member of the audience. Never mind that Garner was tall, brawny and, well, movie-star handsome. The persona he perfected was never less than manly, good with his dukes and charming to the ladies, but his heroics were kept human-scale thanks to his gift for the comic turn. He remained one of the people.

He burst on the scene with this disarming style in the 1950s TV Western “Maverick,” which led to a stellar career in TV and films such as “The Rockford Files” and his Oscar-nominated “Murphy’s Romance.”

The 86-year-old Garner, who was found dead of natural causes at his Los Angeles home on Saturday, was adept at drama and action. But he was best known for his low-key, wisecracking style, especially on his hit TV series, “Maverick” and “The Rockford Files.”

His quick-witted avoidance of conflict offered a refreshing new take on the American hero, contrasting with the blunt toughness of John Wayne and the laconic trigger-happiness of Clint Eastwood.

There’s no better display of Garner’s everyman majesty than the NBC series “The Rockford Files” (1974-80). He played an L.A. private eye and wrongly jailed ex-con who seemed to rarely get paid, or even get thanks, for the cases he took, while helplessly getting drawn into trouble to help someone who was neither a client nor friend. He lived in a trailer with an answering machine that, in the show’s opening titles, always took a message that had nothing to do with a paying job, frequently from a cranky creditor.

Through it all, Jim Rockford, however down on his luck, persevered hopefully. He wore the veneer of a cynic, but led with his heart.

Well into his 70s, the handsome Oklahoman remained active in both TV and film. In 2002, he was Sandra Bullock’s father in the film “Divine Secrets of the Ya-Ya Sisterhood.” The following year, he joined the cast of “8 Simple Rules ... For Dating My Teenage Daughter,” playing the grandfather on the sitcom - and helping ground it with his reassuring presence - after star John Ritter, who played the father, died in the second season.

It was in 1957 when ABC, desperate to compete on ratings-rich Sunday night, scheduled “Maverick” against CBS’s powerhouse “The Ed Sullivan Show” and NBC’s “The Steve Allen Show.” To everyone’s surprise - except Garner’s- “Maverick” soon outpolled both.

At a time when the networks were awash with hard-eyed, traditional Western heroes, Bret Maverick provided a breath of fresh air. With his sardonic tone and his eagerness to talk his way out of a squabble rather than pull out his six-shooter, the con-artist Westerner seemed to scoff at the genre’s values.

His first film after “Maverick” established him as a movie actor. It was “The Children’s Hour,” William Wyler’s remake of Lillian Hellman’s lesbian drama that co-starred Audrey Hepburn and Shirley MacLaine.

He followed in a successful comedy with Kim Novak, “Boys Night Out,” and then established his box-office appeal with the 1963 blockbuster war drama “The Great Escape” and two smash comedies with Doris Day - “The Thrill of It All” and “Move Over Darling.”

In the 1980s and 1990s, when most stars his age were considered over the hill, Garner’s career remained strong. He played a supporting role as a marshal in the 1994 “Maverick,” a big-screen return to the TV series with Mel Gibson in Garner’s old title role. His only Oscar nomination came for the 1985 “Murphy’s Romance,” a comedy about a small-town love relationship in which he co-starred with Sally Field.