Seo and VIXX get culture roles

Seo and VIXX get culture roles 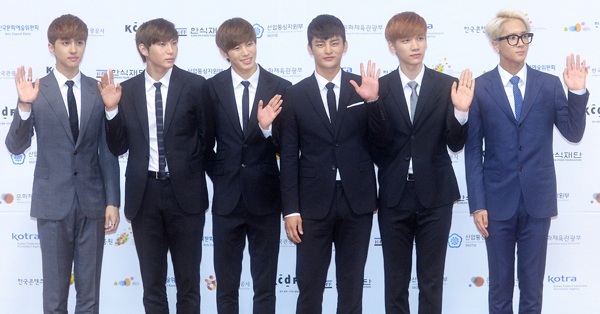 Actor Seo In-guk of “Reply 1997,” third from right, and members of boy group VIXX meet the media yesterday at the Korea Trade-Investment Promotion Agency in Seocho District, southern Seoul. They were designated as honorary ambassadors for the agency’s Korean culture expo in Brazil next month. [NEWSIS]

Those who attend the expo will get a chance to closely connect with Korean companies to seek new business opportunities for three days starting Aug. 13.

The fifth edition of the event will be larger than previous expos in Thailand, France, Japan and the United Kingdom. Many Korean celebrities contributed their talents to promote the earlier events, including boy groups Super Junior and JYJ and girl groups Miss A, Secret and 2NE1.

Seo, winner of the survival audition program “Superstar K” on cable channel Mnet, was picked after the dramas “Reply 1997” and “Master’s Sun” brought him wider popularity.

“I feel very honored to be chosen to promote such an important event,” said Seo, “and I’ll strive to spread the word about Korean cultural content until there is more to be seen on TV screens in Brazil.

“The expo will be a fun event where anyone interested in Korean culture can join in and enjoy.”

He added that the spread of Korean culture should not be divided into different genres, but rather the combination of music, dance, TV shows and other content is best delivered as a whole.

While Seo will show off his individual talent as an actor and singer, six-member group VIXX will present the power of a team to attract the interest of countries in South America.

The rising group has been actively meeting fans overseas, as it has performed in the United States, Sweden and Italy. This year, the group also plans to tour three cities in Japan, five cities in Southeast Asia and three countries in Europe.

“It is such a delight that Korean culture is getting more and more popular in countries in South America,” the group said.

Korea’s trade and cultural agencies are trying to translate rising worldwide interest in the country’s culture into stronger economic ties. About 250 companies from Korea and elsewhere will participate in Brazil’s expo.

The event will include some hands-on experiences involving the fashion styles of Korean stars.

In the “K-Pop Star Style Show,” local visitors can try on outfits worn by Korean celebrities and sample the cosmetics they used.

To make it easier for Brazilians to buy items through Korean websites, the trade agency plans an initiative with Brazil to set up an e-commerce system.