Investors are attracted to infrastructure funds

Investors are attracted to infrastructure funds 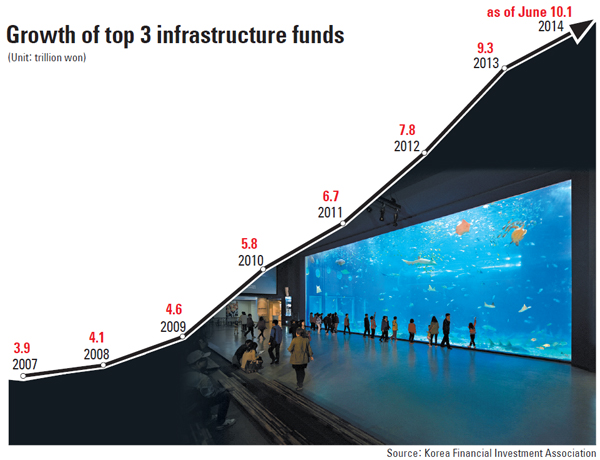 Although the Jeju provincial authority supervised its construction, it does not own the facility - three banks and Hanwha Life Insurance do. In 2010, they created a fund through Hanwha Asset Management and invested 120 billion won ($117 million) to build the aquarium, which opened in 2012. The companies will manage it for 30 years and then hand it over to the regional authority.

The aquarium was a build-transfer-operate (BTO) project.

“As part of Jeju’s tourism infrastructure construction project, we were given land for free,” said Hanwha Asset Management.

Another case is the Dongducheon LNG power plant, which is also owned by a fund. The plant will cost about 172 billion won to build and will generate enough electricity to supply 600,000 households.

Six businesses including insurance companies, banks and mutual funds paid for the plant, and the Korea Power Exchange agreed to buy all the electricity generated.

KB Asset Management, which established the fund, is managing another fund that has invested in four other power plants, including the GS Power Anyang cogeneration plant and Gangneung coal power plant.

The number of infrastructure funds that invest in such projects as roads, schools and power plants is growing. 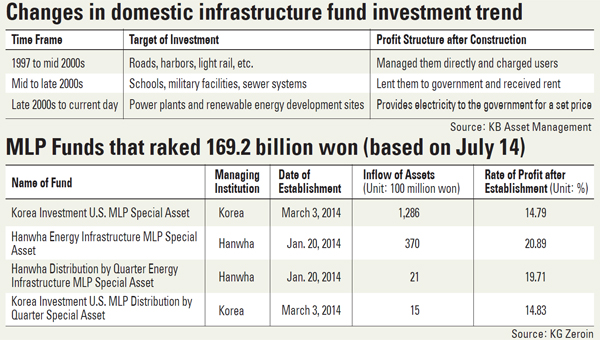 Infrastructure funds began to grow domestically after the 1997 financial crisis, when the government was short of investment capital.

For investors, infrastructure funds are appealing because they fluctuate less than stocks and provide a steady stream of profit.

“There has always been a continuous demand for alternative investments like these, which are more stable and profitable than stocks,” says Jung Yong-uk, manager of Hanwha Asset’s infrastructure management team. “Since these investments concern the government, they are both stable and long term.”

Targets of infrastructure fund investment have changed over the years.

From the 1997 financial crisis to the mid-2000s, companies invested in big infrastructure projects such as roads, harbors and railroads.

As a result, the Second Gyeongin Expressway, New Daegu-Busan Expressway and Busan-Gimhae Light Rail were built. These developments were usually BTO projects.

After the mid-2000s, governments leased school, military and cultural facilities, with supervision shifting from central to local governments.

In the late 2000s, investments were concentrated in power plants as well as renewable energy development.

Recently, foreign infrastructure investments have been growing. Domestic developments are nearly complete and increasing competition is cutting into profits.

Some investors set up funds themselves and participate in development projects directly. Japan’s 11.3 billion yen ($111 million) solar plant fund by KB Asset will manage a 33-megawatt solar plant in Hiroshima.

“There are lots of investment opportunities in Japan thanks to an increase in renewable energy plant development,” says Kim. “The country hopes to lower its reliance on nuclear power following the 2011 earthquake. In fact, the government is obliged to buy electricity produced in these plants for a higher price. As a result, the profits are high.”

Foreign infrastructure investment is heavily concentrated in developed countries in North America and Europe. According to Preqin, a consultant firm specializing in private equity, 82 percent of global infrastructure funds in the first quarter are targeting the United States and Europe.

“Since the amount of investment is large and profits are long term and divided, the preference for developed countries is significant,” says Jung.

Once deemed suitable only for large institutions, infrastructure funds are now available to smaller investors as public placement funds.

Investors looking to put their money in domestic infrastructure can consider Macquarie Group’s Kospi-listed stock. Its value, which hovered at 5,800 won earlier this year, was 6,300 won on July 14.

However, public placement funds, like stock-based funds, can lose value.