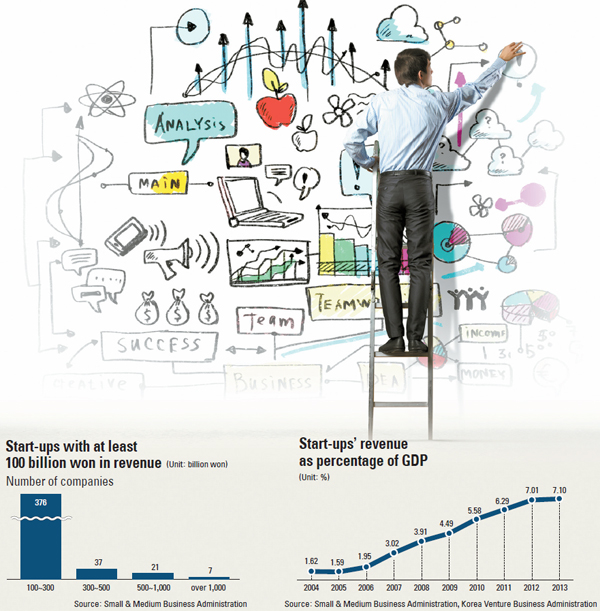 It is a great time to be part of a start-up in Korea. Or at least, that’s the picture painted by the latest statistics from start-ups.

The Small & Medium Business Administration and the Korea Venture Business Association yesterday jointly released a survey of 454 local start-ups who made revenue of 100 billion won ($97.3 million) or more last year.

Start-ups, or venture companies, are built around a profitable but risky technology idea, and can get state assistance. Some of the surveyed companies have grown too big to be considered a start-up, including the country’s largest portal site, Naver, but were included in the survey with smaller tech companies because all of them were once endorsed as a “venture company” by the government.

Three companies earned more than 900 billion won each, raising prospects that the number of members in the 1 trillion won club will grow next year.

As a testament to the fast growth of start-ups, 56 made more than 100 billion won in revenue for the first time last year. Of the 454, 40 companies recorded at least 20 percent annual growth for the past three years.

Of the 40 companies, 15 were involved in computers, semiconductors and other electronic components, while six are food, fabric and non-metal manufacturers. Five others were related to energy, medical equipment and precision devices.

Their operating profits as a percentage of revenues was 6.9 percent, higher than 4.6 percent for large-sized companies and 4.2 percent for small- and mid-sized manufacturers.

Around the world, a total of 19 Korean start-ups have the No. 1 market share in a particular industry.

It took 18.4 years of growth on average for a start-up to post 100 billion won in annual revenue. Software developers took the shortest path to success with an average of 12.5 years to reach the 100 billion won milestone, while information and telecommunication companies and broadcasting service providers took 28.5 years to get there.