Wage talks expected to be tough

Wage talks expected to be tough 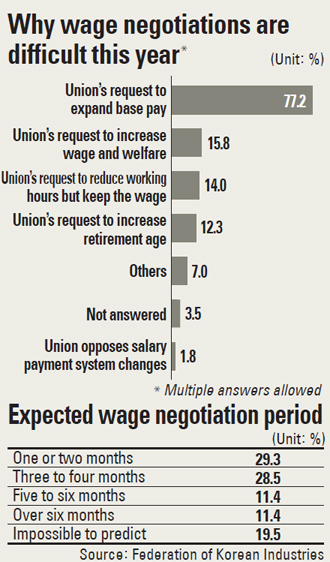 Nearly half of Korea’s big corporations believe that this year’s wage bargaining will be more difficult than last year because of their labor unions’ demands to expand the range of base wages, the survey by the Federation of Korean Industries (FKI) showed yesterday.

Of the 123 companies that responded to the survey, 46.3 percent, or 57 companies, said that this year’s negotiations with their unions will be more difficult than last year, while 40.7 percent of them said it will be the same as last year.

When asked why negotiation might be more difficult, 77.2 percent pointed to the union’s request to expand what is included in a base wage, followed by increased wages and welfare benefits (15.8 percent), reduced working hours (14 percent) and extension of retirement age (12.3 percent).

Base wages are used to set allowances such as overtime pay, holiday pay and paid annual leave, as well as pensions. Labor unions have been claiming that bonuses paid on a regular basis should be counted as base wages and have filed lawsuits to that affect. In some suits, the Supreme Court ruled in favor of the unions.

“Through the Supreme Court’s decision, the range of the base wage should be confirmed and both management and unions should cooperate so that the total amount of labor costs should not be increased sharply,” said FKI’s Investment & Employment research team chief Lee Cheol-haeng. “For the long term, revising the wage payment system to focus on performance and productivity should be pushed forward.”

Most Korean companies are reluctant to deal with the base wage issue as it will increase labor costs and they are already struggling due to the fluctuating currency.

The unions at Hyundai Motor and Hyundai Heavy Industries have asked the corporations to expand what counts as a base wage, but the companies have said that they will not make a decision until a court ruling comes out on their own lawsuits.

But GM Korea, the nation’s third-largest automaker, said last week that it offered to count regular bonuses as part of its employees’ ordinary wages, making it the first local automaker to do so since the court rulings.

According to the company, the proposal was made Thursday during wage talks and was welcomed by the union. The two sides are scheduled to have intensive negotiations to decide the details today.

The local unit of U.S. automaker General Motors said that if the union accepts the offer, employees working at the plant should get at least a 10 percent wage hike.

The two sides are still deciding when the new wage system will go into effect. The management wants to implement it starting next month, while the union wants it to be applied retroactively from January. GM Korea’s union said it will strike if the company doesn’t accept its demand - the union voted to approve industrial action earlier this month.

Industry insiders said that since each company has a different pay system, it is difficult to predict how a new base wage system would affect them.

With difficulties in deciding base pay, more than half of corporations said that their wage negotiations will take three months or more, according to the FKI survey.