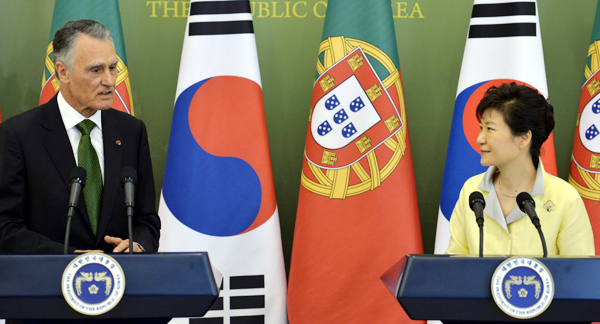 On the last day of a state visit to Seoul that started Saturday, Silva had a closed-door meeting and a luncheon with Park at the Blue House in Seoul to discuss development of bilateral ties between the two countries in various sectors and share opinions on regional stability in Northeast Asia.

It was the first time a Portuguese president paid a state visit to South Korea. Silva was invited by Park and brought a delegation of 30 officials.

For Park, it is the second time to have official meetings with Silva, following an April 2011 visit to Portugal as special envoy of then-president Lee Myung-bak to celebrate the 50th anniversary of diplomatic relations between the two countries.

Before a press conference attended by Park and Silva, vice ministers of both countries signed two MOUs to boost tourism and renewable energy.

Park said she will focus on boosting relations not only with Portugal but also with other Portuguese-speaking countries in various sectors.

The two leaders also discussed developing cooperation in other sectors, such as ICT, shipping and aviation, Park said, and agreed to share technology in those fields.

Silva expressed his condolences to the families of victims of the Sewol ferry disaster at the summit, which was open to press for the first few minutes.

When it comes to the mutual cooperation with other Portuguese-speaking countries, he mentioned some African countries that use the language.