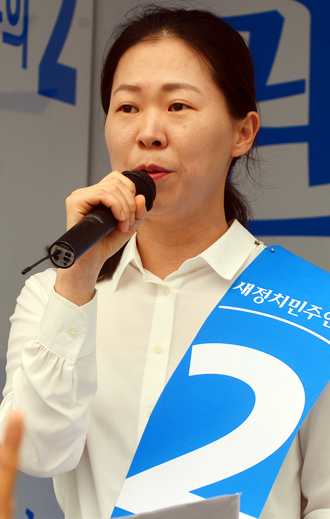 Kwon Eun-hee, a policewoman-turned opposition politician running in the July 30 by-elections from the southern city of Gwangju, was accused of not disclosing the true worth of her real estate assets.

Kwon, a candidate of the New Politics Alliance for Democracy, has come under fire in local media reports alleging she did not disclose all of her husband’s and her properties to the state-run National Election Commission.

According to the NEC website, Kwon claimed the total value of her husband’s properties was 588 million won ($572,652), including three shops in a commercial building in an upscale neighborhood of Cheongju, North Chungcheong, and two shops in a multipurpose building in Hwaseong, Gyeonggi.

According to Kwong’s asset disclosure submitted to the NEC, her husband holds stock in two unlisted companies called “Smart Edu” and “KEB & Partners” and is the major shareholder of each.

Newstapa said the de facto owner of the two companies is Kwon’s husband, because he holds 40 percent of Smart Edu, the largest stake, and 100 percent of KEB & Partners.

Kwon did disclose the value of the shares in the two companies owned by Nam.

The NEC has confirmed that there was nothing wrong in Kwon’s disclosure.

However, local reports claim that Nam set up the two companies as fronts to disguise the value of the couple’s assets to evade tax.

Kwon has a reputation as putting her career on the line in the pursuit of truth and justice. She was the policewoman who made the bombshell revelation in 2013 that she was pressured to go easy on the National Intelligence Service in an investigation of its illegal online smear campaign against the opposition in the presidential election campaign that year.

Ruling Saenuri Party lawmakers yesterday ratcheted up their attacks on Kwon, saying that she allegedly attempted tax evasion by misusing a loophole in the property law.

“What is the real job of Kwon’s husband?” Yoon Sang-hyun, a leader of the ruling party, said at a press meeting on Sunday. “He has set up shell companies and actually owns properties worth millions of dollars. And that is a typical method of a professional property hunter [to evade tax].”

“It’s true that a candidate can only report the par value of stocks of a company if it is unlisted,” a government official told JoongAng Ilbo on the condition of anonymity. “But the law itself has come under fire for a long time because that is the loophole in concealing the properties owned by politicians.”

The NPAD leadership, which handpicked Kwon for the race in Gwangju, defended their candidate, saying the ruling party “is attempting to politically murder Kwon.”

“Despite the NEC’s announcement that her asset disclosure had no illegality, the political attack on her continues,” said Kim Han-gill, a co-chair of the NPAD, at a party meeting yesterday.

Kwon also yesterday requested Newstapa to publish a correction on its website, claiming its reports had “lots of errors.”