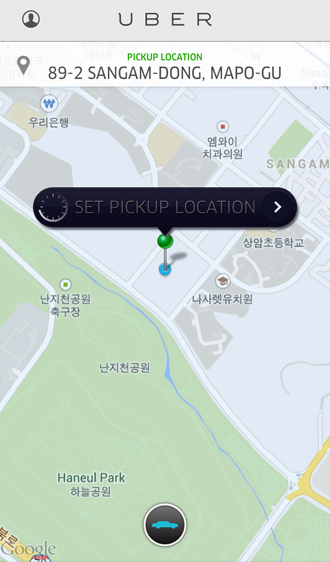 A screen shot from the Uber app, which automatically recognizes a user’s location for its ride-sharing service.

Controversial car-hailing application Uber has come under fire as the Seoul city government seeks to shut down the ride-sharing service over safety issues, particularly its lax scrutiny of drivers.

The mobile app, created by San Francisco-based technology company Uber, is designed to connect passengers with rides in private vehicles. The Korean branch of the mobile start-up, Uber Korea Technology, started operating last August and the app has gained traction in Seoul, although the Korean office declined to disclose the number of users.

The Uber service in Seoul offers rides in upscale vehicles and is known for quality service. The price is higher than regular taxi fares, but the app offers various discounts.

The Seoul Metropolitan Government plans an administrative measure to force the ride-sharing service out of the Korean market. The city government says Uber violates the city’s transportation law.

“Uber has acquired the right to run their business illegally,” said Kim Kyung-ho, head of the urban transportation division at the city office. “This is akin to private car owners running a taxi service without paying license fees, and they are not subject to safety rules and regulations.”

Uber has also come under fire by local governments in Australia, Canada, the United States and UK.

The city government said yesterday that Uber’s drivers are not licensed, which exposes passengers to potential safety risks. The government also warned that Uber drivers do not undergo the kind of scrutiny that typical taxi drivers do.

Unlike licensed taxi drivers, Uber drivers may not maintain their cars properly or get regular safety checks, the city government said, which potentially increases the chance of accidents. Passengers are probably not covered by insurance, the city added.

Another concern is the potential impact on Seoul’s taxi drivers, who could lose business to the on-demand car service.

“Uber not only operates illegally but also hurts the business of Seoul’s taxi drivers, who abide by all rules and laws,” Kim said.

Last month, the Seoul Private Taxi Association, a group that represents taxicab owner-drivers, condemned Uber and called on the city government to crack down on the service.

The Seoul Metropolitan Government already filed complaints against Uber with the police last September and February. However, the investigation stalled as the head of the Korean office was not present in Seoul. Since Uber’s headquarters are located in the United States, the police had a hard time securing evidence to prove the charge.

In May, the government issued a warning to local rental car companies to avoid working with Uber. In the previous month, Seoul fined an Uber driver 1 million won ($974) for not complying with city law. Seoul said Uber’s Korean office was empty when it visited it last month for further investigation.

The city now seeks to cooperate with the Ministry of Land, Infrastructure and Transport to introduce a new law that bans entities like Uber from running taxi businesses.

“Other cities such as Toronto also banned Uber after realizing the downsides associated with the service,” Kim said.

Belgium’s main city of Brussels and Victoria in Australia declared Uber illegal. In Brussels, the company can be fined 10,000 euros ($13,534) for every ride.

The app was launched in 2010 in the United States. Since then, Uber has made inroads into more than 30 cities including New York and London.

So-called sharing services on smartphones have gained traction around the world among younger and tech-savvy users. But critics say many of those services are in a gray area between private ownership and public commerce, which hasn’t been resolved yet. Operators are not required to pay taxes, license fees or comply with various government regulations, including basic safety rules.

But smartphone users are drawn to these new types of services because they cost less and are convenient.

The city government said it will launch its own taxi service similar to Uber.

Uber Korea said all vehicles that is uses are properly insured.