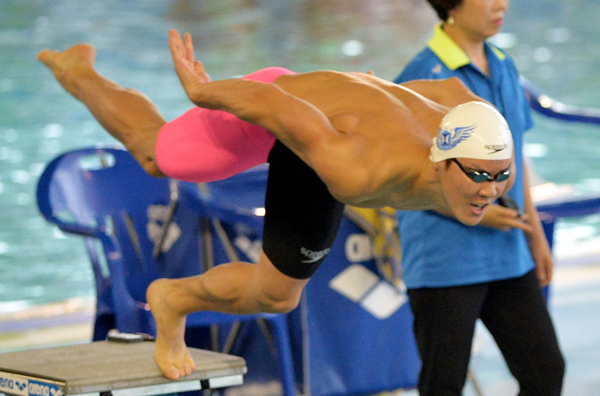 Park Tae-hwan begins the 200-meter freestyle on July 16 at the MBC National Swimming Championship in Gimcheon, North Gyeongsang, en route to the first of his six gold medals. [NEWSIS]

In the 2014 MBC National Swimming Championship from July 16 to Monday, the national team qualifying event for the Asian Games, the 24-year-old collected six gold medals, including one in the 400-meter individual medley on the final day of competition.

There have been worries about whether Park will be in top form in Incheon because of his difficulty in finding a sponsor, which is necessary for training.

But Park, the 400-meter freestyle gold medalist in the 2008 Beijing Olympics who won two silver medals in the 2012 London Olympics, proved he’s ready to take on his biggest rival, Sun Yang of China.

“I always want to show more than people expect,” said Park. “I feel like I’m in very good shape. I will focus on maintaining my physical condition until the Asian Games.”

The following day, he broke the Korean record in the 200-meter individual medley with a time of 2:00.31 after being in third place with one lap to go.

On Saturday, he claimed his third gold in the 400-meter freestyle in an event record of 3:44.75, the fifth-fastest time in the world this year and the best in Asia.

Park then led the Incheon city government team to gold in the 800-meter freestyle relay.

He then picked up his fifth gold on Sunday in the 100-meter freestyle in an event record 48.68 seconds.

The highlight of the championship was Monday’s 400-meter individual medley. Though Park was swimming the event in competition for the first time in his career, he turned in another dramatic come-from-behind victory after starting the final freestyle leg in fifth, 2.58 seconds behind leader Jung Won-yong.

“I think he is better than he was in the 2008 Beijing Olympics,” said Chung Bu-gwang, vice president of the Korean Swimming Federation. “I think we can expect some good news in September.”

Nonetheless, Park had a hard time finding a sponsor after leading mobile carrier SK Telecom failed to extend its sponsorship after the London Olympics.

When he had trouble obtaining funding for training - including long-term training overseas - a small-business owner contributed 500 million won ($488,000) over the past year.

But since the business sponsorship ended this year, a determined Park is preparing for the Asian Games using his own money.

It is unknown how much he spends per year, but when SK Telecom sponsored Park, the conglomerate contributed about 1 billion won annually.