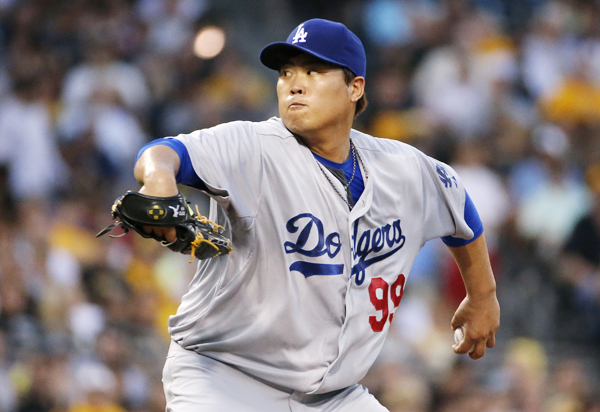 Los Angeles Dodgers starting pitcher Ryu Hyun-jin delivers during the fourth inning of a game Monday against the Pittsburgh Pirates. With his 11th win, Ryu moves to within one game of Adam Wainwright of the St. Louis Cardinals, the National League leader. [AP/NEWSIS]

Ryu Hyun-jin of the Los Angeles Dodgers got off to a good start for the second half of the season with an impressive performance in a 5-2 victory against the Pittsburgh Pirates.

Ryu allowed two runs in seven innings, striking out five, for his 11th win of the season, just one behind National League leader Adam Wainwright of the St. Louis Cardinals.

Ryu appeared well rested after not throwing for a week because of the All-Star break. With fastballs reaching 92 miles per hour and sliders, he retired the first three Pirates hitters on 13 pitches, striking out Andrew McCutcheon to end the inning.

The biggest worry for the 26-year-old before the game may have been run support, with shortstop Hanley Ramirez sidelined with a sore left wrist and right fielder Yasiel Puig sitting out with a swollen left hand. Both were hit by pitches in St. Louis over the weekend .

Filling in for Puig, Matt Kemp got his first start in right field since 2009 and doubled in a run in the third inning to give the Dodgers a 1-0 lead. Andre Ethier later hit a grounder to short to score Adrian Gonzalez with the Dodgers’ second run.

But the L.A. offense was led by Ramirez’s replacement, Justin Turner, who was involved in four of the team’s five runs with two RBIs and two runs scored. In the fourth inning, Turner hit a double on a sharp ground ball that Pirates third baseman Josh Harrison couldn’t handle, scoring A.J. Ellis and Dee Gordon. Gonzalez followed with an RBI single for the Dodgers’ fifth run.

Ryu was hit hard in his last start on the road, giving up seven runs in 2 1/3 innings to the Tigers in Detroit. Before the Tigers game, Ryu’s ERA was 1.62 (6-1) in eight games away from Dodger Stadium.

In Pittsburgh, Ryu ended the Pirates’ five-game winning streak at home. He also became a Pirates killer as he improved his record to 3-0 with a 2.79 ERA against the hosts.

Ryu has generally been known as a fastball-changeup pitcher, but this season he has gone more to his slider. Ryu’s average slider speed was 81.7 miles per hour during his rookie season with the Dodgers, according to MLB.com, compared to 82.7 this year.

In his last start against the San Diego Padres, Ryu’s average speed was 87.6 miles per hour and the coaching staff thought he was throwing cut fastballs rather than sliders.

According to the 2013 Baseball America Prospect Handbook, “Most scouts who watched him in Korea thought his changeup was his best second pitch, though the Dodgers believe more in his slider.”

“I started throwing more sliders and curveballs since the Padres game,” Ryu said. “Since I feel like I have been controlling them well, I plan to throw them more. I think they are very effective when I need a strikeout.”

His sliders on Monday also dominated the game, as hitters swung and missed six of seven with one foul ball through the first two innings. In his past two games, 14 of Ryu’s 27 sliders (52 percent) were strikes. That is a mere 2 percent short of the Dodgers’ ace Clayton Kershaw, who possesses one of the best sliders in Major League Baseball.

After once through the Pirates’ lineup, Ryu returned to his changeup, but the Pirates handled it better than the Padres.

Ryu gave up two runs in the fourth inning on three hits and a walk.

Brian Wilson, J.P. Howell and closer Kenley Jansen held the Pirates scoreless in the eighth and ninth innings to preserve the win for Ryu.